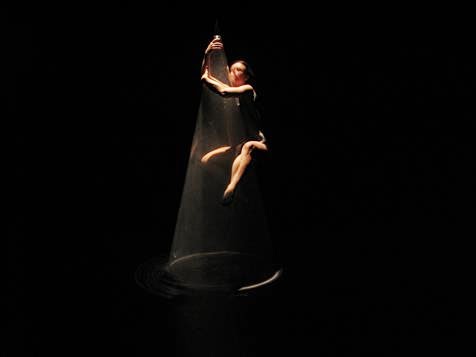 I saw MANTLE 5 or 6 weeks ago at the Campbelltown Arts Centre, at its first performance. When I read about the search, and the limited opportunities available for the "womens" voices in the performing arts in Sydney (Australia) I can't help but think and believe that this company, My Darling Patricia (MDP), is the epitome, the role model for women (anybody) creating new theatre and performance. Certainly, a leader and consistent inspiration in that field. That the work, for me, is palpably a 'female voice', is only part of the excited pleasure I always anticipate when attending a performance created by My Darling Patricia.

I have been a captive of this company since my first encounter in 2006 with their production, POLITELY SAVAGE, at the old Performance Space on Cleveland Street. Since, I have been an entranced devotee: NIGHT GARDEN (2009), AFRICA (2011) and POSTS IN THE PADDOCK (2011). MDP was founded in Sydney in 2004 by four women, creating "original, interdisciplinary Australian theatre through a collaborative process" led by Artistic Directors Halycon Macleod and Clare Britton. In the program notes we are told:


The creative development of MANTLE has been a slow burn following an initial residency over two weeks at Campbelltown Arts Centre in late 2011. Since that time Halycon and Clare have progressed in the writing and the imagery - Halcyon in Melbourne and Clare in residence at the Windmill in the Rocks ...

This performance comes off a further five week workshop.

MANTLE, begins in darkness with a voice-over. The play has a dense text and is delivered as, what I felt was like a live radio play, by Halcyon Macleod, interspersed with imagery created by Clare Britton, on and with a solo dancer/choreographer, Jade Dewi Tyas Tunggal. Composition and Sound Design, by Jack Prest, and the crucial offers of the Lighting by Matt Marshall, accompanies the work throughout.

MANTLE takes us with this verbiage and sparse imagery on a psychic journey with light and darkness, sound and movement, contemplating the vastness of geological time, for it seems that we are being taken to the core of the Planet Earth through many, many layers, encountering visions and difficulties. It is provocative and demanding, the imagery complex and somewhat mysterious.

Towards the end of the piece, we discover that what we have actually been journeying through, is the unconscious psyche of a woman surviving, for some days, after an accident in the remote bush. It finishes with her 'surfacing' to the earth's crust with the arrival of some rescuers - she, coming back to a present life, to a consciousness. The poetry of the journey's language is beautifully juxtaposed with the jocular banality of the country voices of the rescue team.

I saw this work at its first revelation and acknowledge that there is room for further development and clarifications, for editing of text and refinement of imagery for impact. The patience one has to exert in the darkness with the unusual encountering of the 'radio form' of the text, and the accruing of visual effect and drama for discovery and the needful ability to stay suspended/engaged within the work, could be further attended to. Its length (some 90 minutes) may need reduction. I was too long in a place of puzzlement as to what was happening but was relieved with the explanation towards it's end - it gave a gratification that was humorously cathartic in its boldness.

MANTLE, is a new work, accompanied by all the vicissitudes and beatitudes of the women who created it (Ms Tungall performing the physical imagery/choreography in a very advanced state of pregnancy, for instance). One hopes to see the work again, to observe the great, exemplary care that My Darling Patricia have always demonstrated, especially with the value that these artists give to TIME, to develop their ideas. Belvoir, perhaps, could take the TIME lesson for development, demonstrated here by this exemplary company, into their planning about presenting, to audiences, interesting 'ideas'.
Posted by Kevin Jackson at 8:30 PM