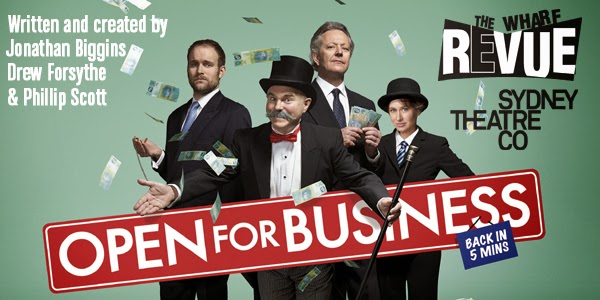 The Wharf Revue has become a staple, stalwart, of the Sydney Theatre Company (STC), end of year seasons. They must make a box office boon! Boom?! How many has it been? 14 or 15? 15, I think. I haven't seen one for years. OPEN FOR BUSINESS is what I remember the Wharf Revue's to be. Some awfully talented artists, in this case: Jonathan Biggins, Amanda Bishop, Philip Scott and newcomer, this year to the talent, Doug Hansell, giving their considerable all to the material they have mostly written for themselves. Singing, more than wonderfully, Dancing, with a flair for a top flight musical comedy gig on a Tonight Show, and impersonating with a ruthless observational skill to allow instant recognition of iconic referencings, satirising, mostly political figures and popular culture personalities with impecable techniques.

Mr Biginns scores best with his well honed Keating impression (my personal favourite in the writing stakes, as well) although his fat-costumed Clive Palmer or his be-shorted dancing bush walker, Bob Brown, are also near winners in his personal arsenal of comic routine; Ms Bishop does a well loved Gillard (although she gets little airing) and, an hilarious Christine Milne, and besides, gives us an airing of her quite considerable 'pipes' in singing a 'ditty' concerning Julie Bishop to the Doll's song from Offenbach's TALES OF HOFFMAN, and, later, a mock Wagnerian turn in gobbledegook with very amusing sub-titles, with Mr Scott; while elsewhere Mr Scott most memorably does a Brandis. New comer, Mr Hansell, scores well with his take on Christopher Pyne and then, Scott Morrison engaged in pillow talk with his wife and another intruder(!) and he, too, has a set of 'pipes' that are quite spectacular and get a useful workout. This ensemble is tireless in the number of changes that they give us and in the top flight finesse of their performances. Some of the best satirical writing however, lies with, not the performed material, but with some of the video segments - the Budget Warehouse interludes are spot-on, while Mr Forsythe appearing on screen as that other Bishop, Bronwyn, scores a bull's eye in the opening moments.

This show has been out and around the 'traps' (other theatres) for some 40-odd performances, before getting back to the STC Wharf, so the work is well drilled and set securely. What it isn't is up-to-the-minute. I found it odd, that Vladimir Putin never appeared, and the macho alpha-dickery of shirt fronting never came to the floor. That the rapaciousness of industry, business, corporations, and other Institutions, for instance, the scandal surrounding our banks, was not brought more boldly to the lens of scrutiny - but, then look at the corporate sponsor standing beside these Creative Artists of the STC: the (in)famous Merrill Lynch, Bank of America, and nudge-nudge, wink, wink, burst into a song and dance, and you might surmise, why? - open for business indeed. As I glance over towards Cockatoo Island from the decks of the STC Wharf theatres it is not so odd, perhaps, Mr Brandis!

The material we are given in OPEN FOR BUSINESS is mostly amusing, and sometimes funny, and I did laugh, but was never confronted, riled or surprised - it hit all the obvious targets with gentle slaps of cute satire. Striking the gong of concern with a limp lettuce leaf. This Revue is safe beyond safe. Nobody will likely to be offended. The STC can be rest assured that Mr Brandis and his buddies will have no need to send down from 'the star chamber' or 'Roman closets', anybody to scrutinise the show, or the funding requests of the STC Artistic Board - all, in this show, is defensively decorous. The most daring this Revue got was in presenting in the middle of the evening a hymn to the Abused Victims of a particular Institution whilst dressed in vestments, and supported from behind by images of the rose coloured glass of cathedral windows. No-one in the audience quite knew how to absorb it, what to do with it. It was discomforting and deadly serious, a worthy statement that was beyond parodying, but not exposure. This was something I wanted more of. Those moments of Brechtian realisations of indefensible truths. One should be made to weep or laugh at the hazards of our modern democracies and otherwise.

This production, after the long 'regional' tour, is slick and well tailored to its market audience of over 40's. Youth might find it a little passé. It has no in-the-moment spontaneity of subject matter. It has the continuous 'sound' of a trad dance band, where a punk band noise should, also, make an entrance. From my youth, I have a vivid memory of a live television show called THE MAVIS BRAMSTON SHOW. It played on Channel 7, from 1964-68, and had been inspired by the British satirical show, THAT WAS THE WEEK THAT WAS. It was a combination of the traditions of the famous Sydney, Phililp Street Revues, e.g. A CUP OF TEA, A BEX, AND A GOOD LIE DOWN (1966) of vaudeville song-sketch traditions, and was much like what OPEN FOR BUSINESS is, plus, crucially plus, a weekly, sometimes of the day, satiric comment. The opening to Mavis each week was a song sung by the performers, (people like June Salter, Barry Creyton, Gordon Chater, Carol Raye, Noeline Brown) called, I think, "Togetherness", and was performed live, and usually written that very afternoon, and contained topical references torn from the newspapers of the day - virtually 'hot-off-the-press' and titivating in its fresh and often cheeky audacity. It is this danger of the pulse of the day, the very present, that is mostly absent from the Wharf Revue, well rehearsed, unalterable and not challenging, that I reckon makes it a tame night in the theatre mostly for the comfortable and converted, who may want a 'good' night out as they 'let their hair down' in the final turn down to the Christmas Summer Holidays. ("And, ding , ding, as they turn into the straight for this year's Melbourne Cup ... ." It must be Wharf Revue time, again).

OPEN FOR BUSINESS is very, very bourgeois and more than conservatively dullish. Undoubtedly, it has an audience. Undoubtedly, the STC are onto a good thing, but it is undoubtedly, not very 'cutting edge'. A daily frisson of new comment would give each night a special excitement for every audience, a unique 'Togetherness', and more importantly for the talented cast, something to take a risk on, at every outing. What with the long distance-past rehearsal dates and the long tour, OPEN FOR BUSINESS feels a bit as if it has been jellied in aspic. There is, indeed, as the publicity suggests, lots of song and dance and wigs. It's just that it isn't as razor like, as it claims, but much more butter knife in its edge. Go along, it's skilful in every way, but in the satirical thrill of the writing.

I wonder what Barry Humphries could contribute if he were writing for these talented individuals?
"Much, Sir Les, much." "For certain, Dame Edna, for certain."