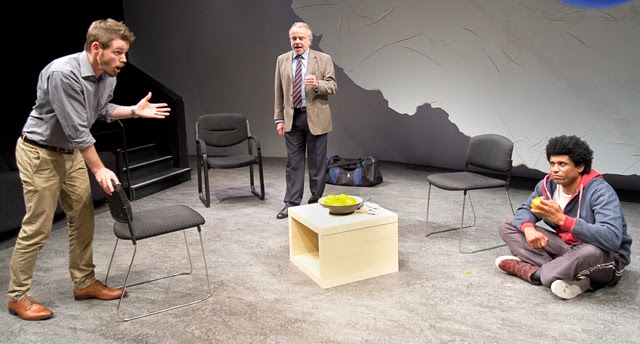 BLUE/ORANGE written by Joe Penhall, was first produced at the Royal Court Theatre, in London, in 2000. The play was the winner of the Evening Standard Best Play Award, the Olivier Award for Best Play 2001 and the Critics' Circle Award for Best New Play 2000. British born with an Australian education, Mr Penhall began his working life as a social worker, then journalist. He now lives in London. His first play was SOME VOICES IN 1994, his recent theatre works were BIRTHDAY (2012), at the Royal Court, and a musical, SUNNY AFTERNOON, at the Hampstead Theatre, this year - lately, transferred into the London West End at the Harold Pinter Theatre. Most of us would know his work through the screenplay adaptions he has made of Ian McEwen's novel, ENDURING LOVE (2004), and Cormac McCarthy's, THE ROAD (2009).

BLUE/ORANGE is set in a London Psychiatric hospital. A young black patient, Christopher (Dorian Nkono) is completing a mandatory observation of 28 days after an incident in a local market place, and is due for release - something Christopher is 'bursting' to have. His young Doctor, Bruce (Ian Meadows), has to decide whether to release him back into the community, or not. He suspects that Christopher is schizophrenic and may do himself or others harm, and believes he ought to be held for longer observation. His mentor/supervising Doctor, and Head of Department, Robert (Sean Taylor), is brought in for his opinion. They are at odds.

What ensues is a verbal battle between the two Doctors. Robert is the urbane professional - the 'top banana' of this Institution - and has all the competencies that can achieve that: an impeccable professional background and reputation in his field, with all the, necessary, attendant publications to enhance his practice and fortune, and an ability, as a contemporary Administrator, to run the hospital as a successful Corporate - money/budget-wise - entity. The pressure for Robert to maintain that reputational status is significant. On the other hand, Bruce is at the beginning of his career. He has a glowing academic background and a growing capability in his practice, and an approach to his work commitments that are 'youthfully' idealistic. He is privileged to have gained Robert, on personal request, as his mentor. It is, in fact, more than a privilege, it is the right professional, political and social asset, and it is, undoubtedly, the career making signature, that he needs.

The professional power play between these two men has the volatile Christopher as the source/sauce to their increasingly disparate/desperate positions. The power play battle will have meaningful consequences on the young life of Christopher. (it will, ironically, have meaningful consequences for these two doctors, as well! ) The difficulty is, is that Christopher presents a case history that appears to be unlikely: that he is an illegitimate son of Idi Amin, hiding in London with his mother, in fear, and that the orange in Uganda is not seen as orange but blue. Ethnographically/critically that is a possibility. Cultural ignorances/prejudices, the patterns of ethnocentrism, that may be unconsciously assumed by doctors in diagnosing patients, could be a harmful emphasis in the estimation of Christopher's well being (it, also, conveniently, is the subject matter of Doctor Robert's latest book thesis, due to be published quite soon!) And, too, Christopher has other surprises to his story/tactics  so, that the battleground upon which the doctors are 'brawling' keeps, inconveniently, shifting.

The text is a wonderful, wittily argued and emotional 'roller-coaster' to experience. The excitement of the language and the exposed cultural 'game plays' of the characters in the play is a very rewarding one. The calibrations of situational control into the thickets of the needs and worlds of these characters is masterful, and grippingly suspenseful - the audience, perforce, becomes an actively empathetic participant in the journey - admiring and switching sides, often. Like my recent experiences in the theatre with Edward Albee's THE ZOO STORY, Kenneth Lonergan's THIS IS OUR YOUTH and LOBBY HERO, or, Sue Smith's KRYPTONITE the writing is of an estimable high quality, and a confirmation of the power of the art and craft of theatre literature as an embodied treasure when all the elements needed for that immensely challenging medium is present.

Anna Crawford has directed her collaborators well, for, the very simple and abstracted Set Design, by Tobhiyah Stone Feller, is enhanced by the thoughtful and good looking Lighting Design by Christopher Page - all a subtle contribution to the presentation of the sophisticated debates of the text. I, also, enjoyed the apt music interludes, which are not credited in the program.

Mr Taylor appeared to be well in control of his powerful and richly confident doctor, Robert, and created a charming, intellectual, and class-conscious professional, with relaxed skill ease, and brilliantly signalled the sub-textual Machivellian machinations of the man for our delectation. His control of the comedy is scintillating. Mr Meadows grows in stature and clarity as the play unravels, as his Doctor, Bruce, is forced to face the 'reality' of what it might mean, ethically, to survive in the world of his professional interest - it may be more than a pure scientific ideological striving, more than the 'right'  care of a patient. The arc that Mr Meadows draws in his performance is intensely gripping, right through to his final action, the bite of an orange that drips, ominously, to the floor, from his mouth, Neanderthal-like. The ensemble heat that emanates on the Ensemble stage, the exciting element of this production, is ignited in the very first scene, and kept burning throughout, with the well observed, and craft detailed, 'edgy' performance of Mr Nkono, as Christopher. He brings a sense of danger, of fascinating unpredictability, to the life force of this young man every time he is present, that lifts the debate between the urbane doctors into one resonating with the Darwinian sense of the survival of the fittest. The Doctors/actors are thrillingly alert to the changes rung in the performance offered by Mr Nkono, both as characters, and undoubtedly, as actors. BLUE/ORANGE, indeed provokes, re-enforces, the thought, that this is, indeed, a mad world - a mad, mad world my masters - and, just, what or who, is in charge of the asylum. Humanism, or Commercial advantage? Sane men or madmen?

BLUE /ORANGE, at the Ensemble Theatre is a recommended production of a very good play. The satisfaction levels given us, are high. Go see it. Great writing and terrific performances from a very well matched ensemble.
Posted by Editor at 5:46 PM