Clare Grant. Be Careful What You Wish For. 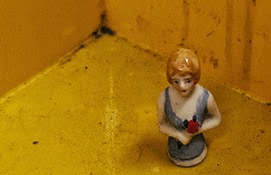 School of the Arts and Media (SAM), University of New South Wales (UNSW) present, BE CAREFUL WHAT YOU WISH FOR: 5 EVENTS, at the Io Myers Studio, Lower Campus, UNSW. 30 Oct - 1 Nov.

BE CAREFUL WHAT YOU WISH FOR: 5 EVENTS is a student work, part of Collaborative Making 2014, guided by Clare Grant and Caroline Wake from the School of Arts and Media, UNSW, and accommodated by the Creative Practice Lab at the Io Myers Studio. I do not, usually, write-up the work of students, but, felt impelled to record, for history's sake, this significance..

It is significant, for it is the last work of a great, and important contributor to the theatrical developments on the Sydney performing arts scene, Clare Grant. Ms Grant has been a leading academic, and practising artist at the UNSW, for quite SOME time! This year she retires. This work is the culmination of her contribution in that domain. Certainly, one hopes, not the last work of hers that we will see in Sydney.

I am not really qualified to talk of Ms Grant. Hopefully, others who are, will do so. I know of her only through some of her performance contributions, ages ago, with the now legendary, The Sydney Front, and her connection to such spaces as Performance Space - the old and new one - and the PACT, the Centre for Emerging Artists. Whilst I was toiling away in a completely different area of performance to Ms Grant, in mainstream 'stuff', Ms Grant has been creating, and encouraging others to create, in the alternative, and not always understood world, in Australia, of performance art. Her reward has to be in the pleasure to see the growing thrall and practice of her vision in Sydney and around Australia over this past decade, and in the evolving present. No doubt, evidentially, artists inspired by her are carrying the baton of her craft and aspirations forward.

BE CAREFUL FOR WHAT YOU WISH; 5 EVENTS at the Io Myers Studio began with the question: "What happens when you put a box onto a theatre stage?". Each of the student collectives have come to an evolving solution and each discovered, as Ms Grant suggests in her program note, that the investigation asked, "boiled down to nothing more or less than 'What is theatre and how is it made?' - no small question to embark on in a few short weeks." I found all five of the 'events' arresting, but particularly the third piece: Is This OK With You? Under a series of round tented shapes, which were raised and lowered by the audience with pulleys, physical provocations (and consequently, intellectual and emotional ones, too) were offered. The investigation of the 'way' to present this work, for a period of time in live performance, repeatedly (after each raising of the tented curtain) was, for me, the most evolved, and the most intellectually satisfying exploration of the engagements.

I had a very interesting time. Ms Grants' presence and mentoring skills were an active part of that experience. She sat, occupied, with note and pen, no doubt with incites/insights for her students concerning the audience's re-action, contribution- there were, after all, several more performances for the work to evolve.

Several years ago, 2012, Ms Grant asked me to work on a production with some of her students over their Summer break to have showings in February. I worked with the students on a play that I had wanted to explore for years: THE OTHER SHORE, by Nobel Prize winner, Gao Xingian - to find an ideal performance that "should be a unity of somatics (of the body), language and psychology." It was a  personally fulfilling time, and I now thank Ms Grant, wholeheartedly, for that unexpected opportunity. It was an act of generosity, of great prescience for me. Best wishes for the oncoming quest and journey.

Thanks, Clare, for all your vision, inspiration, anxiety. And, especially for your plain blood, sweat. and tears over years of great 'political' battle. It was comforting and great to be back in the Io Myers Studio surrounded by the supportive, and modest, Creative Practice Lab. Still forces of influence to be reckoned with and utilised in the Sydney performance arts scene. Congratulations to UNSW for its vision for the arts on this campus, in an environment that can, often, be hostile to art and artists - after all, 'what do they contribute?' some (philistines) can ask, and frequently do. Answer: Abundantly, to the health and a wealth of the nation - it's called and valued as Social Capital.
Posted by Editor at 5:59 PM