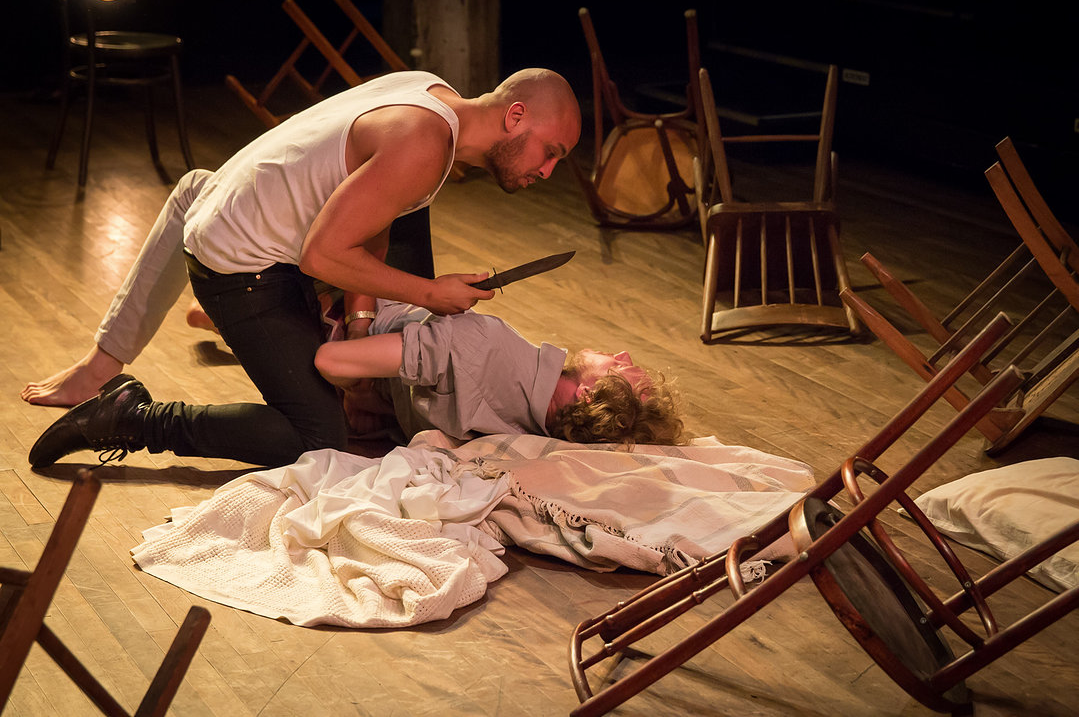 
Anton published nothing in spring 1881: perhaps he was writing his first surviving play, a monstrous melodrama usually known by the name of its main protagonist, Platonov (other titles: FATHERLESS; THE PLAY WITHOUT A TITLE). Misha (a brother of Chekhov) recalled copying out the whole text twice, and handing it to the actress Ermolova. She rejected it, and Anton never took up the manuscript again (it was published nearly twenty years after his death). To perform it would take five hours; it is full of cliches and provincialisms. Yet Platonov is a blueprint for Chekhovian drama: a decaying estate is to be auctioned and nobody can save it. Even the mine shafts making ominous noises under the steppe anticipate The Cherry Orchard. The hero, like Uncle Vanya, believes he could have been a Hamlet or Christopher Columbus and spends his energies on pointless love affairs. The doctor fails to forestall a suicide. The play lacks stagecraft, brevity and wit, but its absurdities and its mood of doom, its allusions to other writers from Shakespeare to Sacher-Masoch make it recognisable as Chekhov's work. It also proved that Chekhov could write seriously and at length. [1]

I have known the play, in different versions, for some time. My first acquaintance being that, of the Royal Court Theatre's version (text only), in 1960, unlikely as that may seem, entitled, DON JUAN IN THE RUSSIAN MANNER, that had the urbane Rex Harrison as Platonov. Next acquaintance was seeing the great Russian film Director, Nikita Mikhailkov's, AN UNFINISHED PIECE FOR A PLAYER PIANO (1976) - which is an adaption from the play with some short stories. (Mikhailkov has, also, in his film DARK EYES (1987), further adapted Chekhov - in that instance, the short story, THE LADY WITH THE LAP DOG, with Marcello Mastoriani. BURNT BY THE SUN (1994), is his most famous film, and won both the Cannes Award and the Academy Award for Best Foreign Language, of that year. It is, as are the other mentioned films, a wonderful reference for the acting style that best serves the Chekhov canon - definitely required viewing when approaching the play works of Chekhov, I reckon! The ensemble work is breathtaking). Next, is the wonderful Michael Frayn, National Theatre adaptation, WILD HONEY (1984) which edits the unwieldily Chekhov original into a Don Juan black-comic farce - it starred Ian McKellen. Belvoir St presented it at the Seymour Centre. In 1990, Trevor Griffiths adapted the Mikhailkov film for the National Theatre in a play called, PIANO. (And David Hare tackled the original, in 2001, for the Almeida Theatre.)

The play was first performed in a cut and rewritten version in Germany in 1928; for the first time in Russia, in 1957 (!) - it has been performed since, often, by the major Russian companies (and elsewhere) - a particularly famous production, partly set in water, by Lev Dodin at the Maly Theatre. In Australia The Hayloft Project, under the Direction of Simon Stone, gave a version, set in a pool of water: CHEKHOV RE-CUT: PLATONOV, in 2008.

Anthony Skuse's adaptation, and direction of PLATONOV, is based on the text translation, by Laurence Senelick, from his 2006, "The Complete Plays, by Anton Chekhov" (a very accurate, some who know, say, the most accurate translations around) and has emphasised the melodramatic Chekhov traits that foreshadow the pre-occupations of the later, great plays. It seems the girth of the original material does allow broadly different editings to con-figure both a melodrama point of view, or a farcical take, depending on the mood of the adaptors. Mr Skuse, and the actors, began a two week workshop examination of the play at the start of the year:


…the idea was to give ourselves the luxury of investigating the work without the obligation of a production. ... Later in the year we spent another week working with the same group of actors. Everyone was excited by the material and keen to tackle the full work. ... The original twenty characters have been reduced to fourteen. Time and place are sketched very lightly. [2]

Indeed, the setting for this production (Design by Anthony Skuse) is an empty, long space, horizontally scattered with two dozen, or so, chairs, with a few benches on the fringes, on a transverse stage, so that the audience, face the action and each other, on either side. The characters are all dressed in modern dress. It has all the now familiar 'Skuse' traits of production style, with all the actors present all of the time, if not in action, then, in sight of the audience, watching the performance with them, the atmospherics aided by a little song, acappella style (Suzanne Periera). The Design concept is mostly aided, to help narrative contingencies, by the Lighting changes and effects (e.g. the train) by Chris Page, and Sound (although, inconsistently) by Alistair Wallace. No problem, really, but time and place are sketched very lightly.

Unfortunately, this is true of the acting as well: "sketched very lightly." The action of the actors, at my performance, seemed to be concerned only with what transpires in the script, on the stage, as it occurs. To do that, these actors appear to be only personalizing the needful emotional circumstances from their own lives, to attempt to reveal the truths of the characters, in the staged moments, and, unfortunately, do so with very little depth or courage. They work, mostly, from a narrow shelf of their own truths - consequently, there is not much to see that tells the audience, clues the audience, to the deep pains and/or joys of these men and women - the actors baulk, block, deep self-exploration and revelation and, so, give half-hearted, relatively superficial, intellectualised, indications as substitute. Representations of pain, joy grief, shock etc, not experiences of it. It is not enough. Really!

Add, that few of the actors seem to have built a bio-graphical background to the world of the characters, either, so they appear, (even if in modern dress, they should have a complex biography), strangely vacant creations- no life force, no accumulated history, that then, perforce, demands that these characters say and do what they say or do, in the moment, then, and terribly, then. There are no heightened life stakes to much of this work, which as story-tellers in the compressed life mode of dramatic literature, is 'violently' required. 150%.

The lightly sketched approach to the creation of these individual characters, by this company, does not, therefore, allow much sophistication of observation for the audience, let alone much comprehension as to the relationship history of them all. Who is who, and how is each related to the other? What are they saying, doing, to each other, and especially, why? Chekhov developed, and demonstrated, even with this first, this relatively, juvenile play, his strong observational skill, and ability to present the sub-text of character, and their sub-textual relationships to each other with the clues of his text - it is that skill that attracted Stanislavsky and Nemirovitch-Dantchenko, of the fledgling Moscow Art Theatre to him, after knowing Chekhov's next play, IVANOV(1887), to be their principal company writer. Mr Skuse's company of actors seemed to barely know the surface of their character's wants, whys and wherefores, let alone the complex bio-graphical well springs of their actions and relationships.

It is undoubtedly, a difficult ask, to get 14 actors together, consistently, for a co-op production (getting more than 3 together, in my experience, can be, is a juggle). One wonders how often all fourteen of these actors were able to work collectively in the development of this early work of Chekhov's. It appeared, manifestly, at my performance, not enough. Maybe, the luxury of investigating the work without the obligation of a production was the correct conceptual modus operandi. This presentation was more a work-shoppping in an early progress incarnation, than a solution, for an audience to absorb. For Chekhov, of all writers, needs time and a depth of approach.

Suzanne Periera, as the fascinating Anna Petrovna; Sam Trotman as Sergei; and especially, Graeme McRae as Nikolai, and Dorje Swallow as Osip, with principal tasks, do relatively well; while the sheer integrity of presence from Gary Clementson, as Profiri, and Jason Perini, as Burov gave some substance to the background of the world of the play.

Platonov, at the ATYP studio, is then a curiosity, for some theatre goers. Especially, for admirers of Anton Chekhov. It is not for all.

Odd, isn't it, the synchronisity… The Sydney Theatre Company (STC), in a version of this play, adapted by Andrew Upton, now called, THE PRESENT, with Richard Roxburgh, probably, as Platonov, and Cate Blanchett, as Anna Petrovna, is due, as part of next year's STC season. Much like the co-incidence of two recent CYRANO DE BERGERAC'S. One from Sport For Jove, earlier this year, and tonight (15th Nov), the other from the STC.