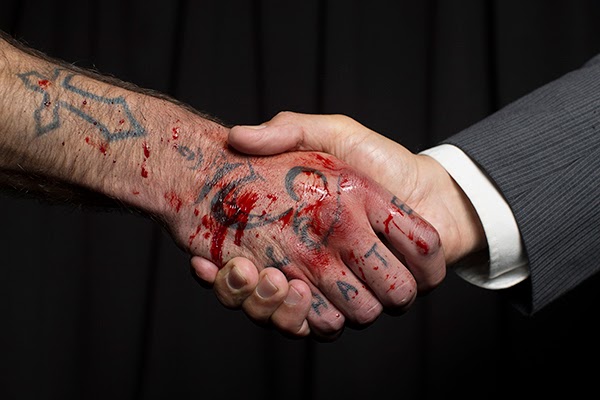 THE WAY THINGS WORK, is a new Australian play, by Aiden Fennessy. Mr Fennessy in his program notes says :


The genesis of the idea came from the proliferation of corruption allegations and their various outcomes not only through every tier of government but from the private sector, the fourth estate, and other major cultural bodies, top to bottom. It's the ever widening gap between 'plausible deniability' and what you could term 'command responsibility'

Two actors, Nicholas Papademetriou and Ashley Lyons, in three scenes, play a different duo of men in each: firstly, men of government; then, men of private business; and then men involved in law 'enforcement', at the near bottom of the chain of 'command'. At the core of the issue in the three scenes, is a contract for a road tunnel (sound familiar), and the standard of the concrete used, to manage the costs! Mr Fennessy reveals, that the way things work, is the opportune employment of corruption to get things done, at all levels of 'enterprise'.

In the present worlds of government, and, particularly, in the after 'smell' of the ICAC sensations, this play is a ripely topical meditation. The comedy is one of recognition at the blatancy of the truths of these men and their situated manoeuvres. One can only be left aghast, and so, what Mr Fennessy gives us, is the opportunity to laugh - it is all one can do, really, for the more things change the more they stay the same, it seems.

It is interesting that one of the thanks given by Mr Fennessy in his preparation of the script, is to Kate McClymont, the prize winning, investigative journalist for the Sydney Morning Herald whose signature quote is: "There always will be evil, and it's our job not to look away."

Leland Kean has Directed the play as smart, provocative and funny. Although, the writing gets off off to a slow start - requiring the actors to 'clown' about, too much - especially the persona played by Mr Papademetriou - it, gradually, finds it's rhythm and tone, to give the audience plenty of reward. One does become absorbed and amused. Such, that the last of the scenarios gathers one into a sexual edginess, that while being extremely disquietening, is also, absolutely, a recognisable possibility. It has the repulse/attract energy of good theatre. Mr Papademetriou and Lyons create well together, playing within a 'cell' of a modern architectural look, known as "distressed", designed, cannily, by Mr Kean and lit dramatically, almost abstractly, by Luiz Pampolha.

This is the last production from Mr Kean, who has guided Rock Surfers Theatre for the last decade or so, as Artistic Director and CEO. The commitment he has made to new Australian writing is one of unfathomable worth. Grateful Thanks.

Bondi Beach is magic, even seen from the veranda of this theatre at the Bondi Pavilion, and this play will give you a renewed appreciation of our relative good fortune to be living here, especially, for our 'freedoms' to be able to talk about our close world and its society - the good, along with the evil, and that this is THE WAY, some, THINGS WORK. Now, and forever?