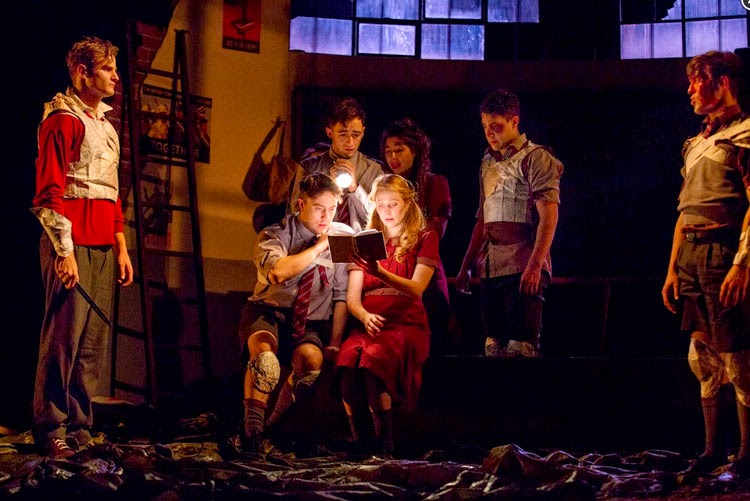 Some children and their teachers are trapped in a classroom/bunker in London during the German Blitzreig of World War Two. The teachers provide the children the text of HENRY V, by William Shakespeare, to read and rehearse in an improvised manner, to distract them from the surrounding chaos. With a concussive Sound Design (Composer and Sound Design, Steve Francis), and Lighting Design (Sian James-Holland), an atmosphere of alarm outside the room brings a reality of war to the environment. Anne Gardiner (Set and Costume Designer) has created a curved wall with crenellated brick ends, and some small, high fixed windows that allow us to see the debris of war, as the bombs, periodically, reverberate about the building. The room is filled with the paraphernalia of desks, chairs, blackboard and other furnishings of a classroom of the period. Too, the children and teachers are dressed in the civilian costume of war - multifarious and individual, 'stressed' school uniforms as survival gear: the Head Boy, destined to read/play Henry V (Michael Sheasby), is rigged out in rugby/ 'rugger' clobber, long socks and all; the main teacher (Keith Agius) in dowdy cardigan and long pants.

This production/play, Directed by Damien Ryan, has a prologue with the Teacher outlining the heritage of the actual Henry V through the other Shakespearean War of the Roses texts, beginning with, for example, quotes from Richard II, followed by a blackboard iteration of the Salic Law confusions that seem to justify the act of war undertaken, against the French, by this new King of England, Henry V, who not long ago was profligate Prince Hal and devoted friend of disreputable Falstaff. Too, a short Epilogue is added to this play production of HENRY V that reveals, pointedly, the stupidity of war, when a brief introduction of Henry VI tells us of the loss of all gained by the previous King's 'victories'/slaughters.

This production is precise in its location, energetic and distractingly active in the shifting and organising of the furniture, the invention and creation of royal costume and properties, of hierarchy, for the 'conceit' - visual precisions - of this presented recent world. The vertiginous energy is immense, clockwork in its execution of imaginative solutions, generating an excitement from the audience that doesn't always have to do with the accurate revealing of the Shakespearean text. Mr Sheasby is the only actor with the one role, all the others play a panoply of characters with dexterous shifts, if not always with clear definition for the audience to take in, identify, and feel secure as to who is who, and what is happening in the unfolding narrative of the source text.

If you hadn't studied the play – could one unequivocally follow the story and its observational controversies and ironies? What would one, frankly, appreciate of the language of Shakespeare? One wonders, if any in the audience who were unfamiliar with the play, what could they give us, as even a mere gist, that the Synopsis of the Program Notes outlines for us, concerning the actual play. Certainly, the students I spoke to after could not do so. They loved the production of the World War II war zone and how it was made, but were not, necessarily, clear as to the story of HENRY V, by William Shakespeare. Their rapturous appreciation was of the magic of Mr Ryan's theatre 'tricks' with his company, than the substance specifics of Shakespeare's text. There is a passionate commitment, from all the actors, to the framework around the Shakespearean play, HENRY V, that overwhelms the original source play and tends to become the centre of focus and admiration, instead. This production from Bell Shakespeare is about the ploys of survivors of the Blitz - even to the murder, by one of the English children, in this classroom, of a German parachutist prisoner-of-war. As such, the production has garnered much kudos. I concur with the skill of the imposed production/play 'written' by Mr Ryan and his company, but believe that the play HENRY V, by William Shakespeare, was the loser in the dynamics of the performance.

All of this talented, relatively, young company, playing here in the Playhouse Theatre, after a long, 5 month National tour, gave robust and disciplined readings to and in the world of the production tasks that Mr Ryan has set them: Michael Sheasby, Matthew Backer, Drew Livingston, Damien Strouthos, Gabriel Fancourt, Eloise Winestock, Danielle King, Darcy Brown, Keith Agius, IIdiko Susany. All of them are comfortable and communicate the Blitz war zone - but not many translate as accurately into the Medieval world of the Plantagenet War zone. Ms Winestock, playing the French Princess Katherine, is impressive in her comic reading of the role: funny, tender and strongwilled. Although, for me, the performance that mastered the double task best in this production, demanded by Mr Ryan: the London of Mr Ryan's invention, and the Medieval Battle Fields of France, is Ms King, who whenever her production responsibilities required it, spoke, acted, the Shakespearean language with clarity and great beauty with her imaginative 'feet' set firmly in both places and times. One wished more of those qualities, were displayed by the rest of the company - I wished some of the time taken with the mastery of the production conceit of surviving the London blitz had been given to the speaking of the language of the play and telling of its specifics. To just reveal the play that's written, to "Speak the speech, I pray you, as I pronounced it to you, trippingly on the tongue ... ." Thrillingly on the tongue, dare I ask? To do what the essay by Brendan Guilfer, in the Program Notes acknowledges:


It's the words, always the words" That "the language is the play's most efficient weapon. ... If this play explores one essential thing it is this - what a man (men) can do through the power of words.

If these actors had been asked to just sit on stools, and 'read' the text accurately with the full powers of their skills, would the "one efficient weapon of the play"- the words, and their persuasive organisation for argument, would the play by Shakespeare be more apparent, more illuminatory?
My first encounter with this play was as a 12 year old school boy, book in hand with an LP (Long playing record) recording of some actors performing for us and I, truly believe, I was captured, simply by the words, and comprehended it fairly well, with my own "imaginary puissance" - no need to see the specific and famous Olivier film (that did come later in my education at the local cinema in a rare revival showing for the collected schools of the local district - the personal home DVD ownership, the possibility of such future,only glimpsed perhaps, in the  world of the Dick Tracey in the newspaper comic strips), no need to have it visualised in World War II constructs, or the more relevant Korean peninsula ones, by my teachers of the late 1950's for Shakespeare's play to be imaginatively alive. Just the words on the page, read and spoken, with radio sound effects. Oh, thrilling.

In 2010, Bell Shakespeare gave us a TWELFTH NIGHT (Directed by Lee Lewis), that like this production of HENRY V, set the play within the context of a staged reading during a social trauma (in that case, a natural disaster of Bush Fire tragedy; in another theatre Ms Lewis had given us a staged reading of Thornton Wilder's OUR TOWN, in the ashed ruins of a New York basement, after the fall of the Twin Towers - a conceit oft used, indeed!), that like this production, too, seemed to dominate the original play, as if the audience would not comprehend the content of the text without it. A demonstration, for me, of a lack of confidence in the original play, or the skills of the actors, or the intelligence of the audience.

I am, it seems, a unique naysayer to the success of the dual plays given to us by Mr Ryan and Bell Shakespeare here - critics have been mightily impressed. I believe that the invention created by Mr Ryan is, undoubtedly, thoughtful and clever, but it was, for me, to the detriment of the original play around which it has been hung. It obfuscates Shakespeare's play. And I do believe that a contemporary audience would/could appreciate the production objectives of Mr Ryan's vision of the content of HENRY V in a 'straight' reading -'wrapping' - of the work. One of Mr Ryan's supreme gifts, one of many, is his ability to inspire and develop an ensemble of actors who will go where he bids with confidence and élan. I wait for Mr Ryan to have the confidence in Shakespeare and his own gifts to give us, the Bards works more simply, less 'tricked' up. Then, we will see Shakespeare's HENRY V, or whichever play he next chooses, speak directly, comprehensively, over the centuries to us as an undoubted Classic of the English language, where words when spoken imaginatively were pictures themselves. To have the audience see with their ears.
Posted by Editor at 1:55 PM