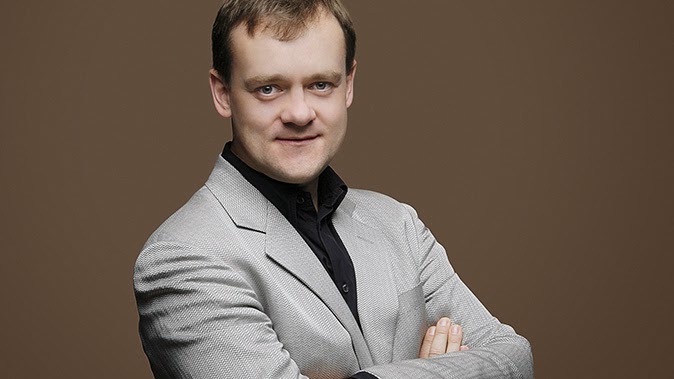 Shamefully, I have not gone to any concert this year with the Sydney Symphony Orchestra. But the Variations on an Original Theme, Op.36 [Enigma], by Edward Elgar (1899) has always been an amusing favourite, so off I went, further 'bribed' by the opportunity to hear Sinfonia da Requiem, Op. 20 by Benjamin Britten (1941), and the Finnish Violinist, Frank Peter Zimmermann, play the Violin Concerto in D minor, Op.47 (1904), by Jean Sibelius. All conducted by guest, Donald Runnicles. This was the last program of the year.

Sitting behind the orchestra, near the tympani, it was thrilling to hear the opening 'bang noises' to the solemn Sinfonia da Requiem, my whole body was pulsed into a grounding readiness for the vibration of sounds for the large orchestra that was to follow. Written, in 1941, in the United States, it has some of its inspiration based on the Latin Mass for the Dead, but this is a requiem without voices - just the orchestra. It has a sense, a convicted feeling, of mourning. Britten dedicated the work to the memory of his parents but also told us:


I'm making it just as anti-war as possible. I don't believe you can express social or political theories in music, but by coupling new music with well-known musical phrases, I think it's possible to get over certain ideas...all I'm sure of is my own anti-war conviction as I write it.

Britten was a pacifist and a conscientious objector. The three movements are played without a break.

Jean Sibelius had wanted to become a virtuoso violinist, however, combined with the relative lateness of his training regime, an injured shoulder and severe stage fright, this did not, in the long term, prove to be a viable career option. So, uncharacteristically, but possibly, in memory of that lost dream, he composed a concerto for a soloist, the violin. It is, today, considered one of the great challenges and works for the violin, acknowledged in its stature, to be able to stand beside those of Beethoven, Brahmns, Mendelssohn and Tchaikovsky.

The Violin Concerto in D minor, Op,47 begins with a long first movement that has soloist and orchestra begin murmuring, in entwined beauty, a set of organic and muscular exchanges. The second movement is full of 'heavenly' poignancies, characterised by a searing tenderness of painful regret, 'spoken' by the soloist, supported by the orchestra . Mr Zimmerman played with inspiration, with delicate impulses, to communicate the 'genius' of the work. The final movement is a "bravura showpiece" of enormous technical ferocity that Sibelius noted: "It must be played with absolute mastery. Fast, of course, but no faster than it can be played perfectly." Mr Zimmerman played "fast", indeed, thrillingly, and, to my ear, "perfectly". One was swept forward and was almost breathless, ecstatic, with the live experience of the virtuosic, daring playing, from the soloist and matching orchestra, so that applause erupted noisefully from the concertgoers (and neophyte, I), and for an extended time. Although the concerto is dedicated to Willy Burmester, it was first played, unsuccessfully, by Viktor Novacek, and did not find its now acclaimed position in the musical world until the 1930's when Jascha Heifetz began to perform it.

After a second interval, the Elgar work, known popularly as the Enigma Variations was given. Created in a relative state of frustration at the 'failure' of his earlier compositions, seated at his piano, Elgar fashioned a tune that struck his wife, Alice, as worth pursuing. He began, further, by imagining what various acquaintances might have done with it - revealing the personality of each of his friends. Fourteen variations were produced. Elgar did not believe the identity of the friends was important for an audience to know - the enjoyment of the work was the only thing of importance, but there was much good-humoured speculation, and still is, about which was who. And although, some may go mad trying to solve the Elgar 'enigma', the composer simply wanted it to stand as a piece of music - and it does, even for myself, a veritable ignoramus about music, simply 'loving' what I love - and is according to Yvonne Frindle, in the program notes for this concert: "one of the best-loved pieces in the orchestral repertoire."

After the performance I wondered why I am so lax about my music going. Maybe, just because of the problem of prioritising my time? Maybe, because of 'the funds" or lack of them? ... Ponder. ... Because, I do, always, thoroughly enjoy it. ... Enjoy it! ...Why? ... Enjoy it, a lot, perhaps, because I am so ignorant of musical composition and the skills of instrument playing. So my expectations are easily satisfied. The experience, then, perforce, is, definitely, unlike so many of my 'tussles' with my theatre going. 'Tussles', in the drama, because I have some complicated entry to its mysteries of creation and playing. its success and failure, I guess. Ignorance can be a bliss.

During the recent holiday period, with my reading, I thought, after a fruitful and wonderful conquering of Thomas Mann's THE MAGIC MOUNTAIN, (my second attempt at it!), I should continue the enriching encounter by, trying to get through, Thomas Mann's DOCTOR FAUSTUS - this, again, a second 'once more unto the breach' striving. It is a quasi biography of a German musical genius composer, Adrian Leverkuhn (who, although fictitious, is based around some of the work of Schoenberg), told by his boyhood friend, Serenus Zeitblom. DOCTOR FAUSTUS is, in my opinion, a great novel, but in all honesty, I confess, I understood, clearly, maybe, only 40%, of what was going on, because of the density of the music compositional discussions strewn throughout it. It has been over a month since I heard (saw) this Sydney Symphony concert and, since, I have come across a passage from the novel that particularly struck my fancy and thought I could share, concerning my modest 'love' for music, despite my relative 'innocence', and my sometime concerns, on whether it was "light" or "heavy", and whether one was better, because of its complications, than another: the Britten, the Sibelius, or the Elgar?

In a late chapter, Chapter Thirty-Eight, in a discussion after some gramophone music, which included some waltzes from Gounod's FAUST and some 'charming ball music from Berlioz's SYMPHONIE FANTASTIQUE' and even some Viennese works: Lanner, Johann Strauss the younger, it was pondered whether it was worthy enough music to be played in front of the great composer, Leverkuhn. He protests:


In God's name no, that was all a mistake. ... 'You underestimate my musical education, ' said he. 'In my early days I had a teacher ... crammed full of the whole world of sound; a bubbling enthusiast, too much in love with every, I really mean every, organised noise, for me to have learned contempt from him. There was no such thing as being "too good" for any sort of music. A man who knew the best, the highest and the austerest; but for him music was music - if it was just music. He objected to Goethe's saying that art is concerned with the good and the difficult; he held that "light" music is difficult too, if it is good, which it can be, just as well as "heavy" music. Some of that stuck by me, I got it from him. Of course I have always grasped the idea that one must be very well anchored in the good and "heavy" to take up with the light.'  [1]

Anyway, I enjoyed this concert enormously and vowed to be more diligent in the coming year with my engagements with the Sydney Symphony Orchestra and to hear much more than I have this year.