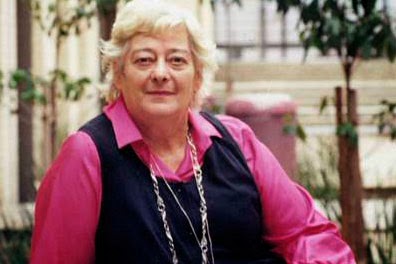 To begin the year with this post is to mark the inevitable passing of time and the fate that comes to all of us: Death.

When I was appointed Head of Acting, by John Clark, in 1985, at the National Institute of Dramatic Art (NIDA), there were three of the Great Foot Soldiers of the Performing Arts, Theatre Division, already present, to guide, support, and most importantly, teach me. One was Keith Bain (who, of course, had taught me as a student there in 1971), the others: Doreen Hogan and Betty Williams. Keith taught Movement. Doreen and Betty taught Voice. Later, I continued to work with them, all, under the Direction of Tony Knight. It is the skill and gifts of these teachers, that, history now regards as, "The Golden Age of NIDA" - which gave NIDA, what was then an Internationally recognised and respected (oh, horrid wording) 'brand' and reputation - this is what, of late, has become known as, "The Old NIDA", as distinct from "The New NIDA" that is presently practising there, especially, in the Acting Course.

Betty was one of the great teachers of Voice skill at the Institution - she was always beckoning her students to find their own voice, their 'Australian voice', by which, she meant not only the 'educated' sound, but also the voice expression of their Australian heritage through connected sub-text. It was precisely there, that she, formidably, demonstrated her greater ability, which was to guide the budding artists into Script Analysis, in the invaluable afternoon, one-on-one tutorials, enabling each and everyone of them to be able to embody the Voice into Speech for the play they were undertaking, tussling with - usually, a great classic, in the second year, and the best of the contemporary, in the third year - to stretch to olympian training demands their developing 'muscular' instrument skills. Pulling down from her shelf, the dictionary, thesaurus and countless other reference books of mythology, history and 'fairy' stories to awaken the imagination of the individual for their audience's sake. Engaging each mind, the life experiences of each actor-student, into personalising the text to find their own voice, to thrillingly give the gift of sophisticated story-telling through imaginative and technical language musicality, to an audience. Betty not only respected the sound of every individual artist-in-training, but also imparted the thrill of words, and the patterns the writers had given them, to be unique storytellers.

Combined with the genius of Keith Bain, and his movement illuminations for the NIDA student, a great instrument was, and could be developed, for all. Well, for those who had the discipline to take up the proffered knowledge and the necessarily wilful wherewithal to do so. It was an insight and habitual technique that she gave her young artists-in-training that distinguishes their work ethics, no matter whether for the theatre, film, television or radio, today. This kind of training, in application, is necessarily a time consuming one, for it is an animal-skill that demands great dedication and patience for it to re-wire 'the brain'- to undo habit to a more neutral place and, then, to install new modes - wiring - for unconscious thinking in preparing the instrument to tell the story of the writer, the source of the inspiration of the task, for an audience. It is, according to the "Old NIDA" way, and Betty's determined zealatory  ideal for Voice training, at least, an intensive three year undertaking. At least.

Betty had the word RIGOUR at the top of her expectation for every one of her students. Never mind your natural gift, if you put in the effort to realise your individual potential, you were an inspiration for her, and she was prepared to put in the time to support you. Can you imagine a contemporary staff that was prepared to work anything from a nine hour day to, sometimes, during production presentations, up to a fourteen hour day? This is to record that Betty did - as did all that remarkably dedicated set of Theatrical Training Foot Soldiers. Idealists, all. What they gave up, willingly, to help their artists-in-training to achieve the potential of greatness, ought to be acknowledged. Betty did this up to the age of 85 with undimmed commitment and love - that is why "Old NIDA" is regarded as A Golden Age. Betty is an exemplar of that passion for the Australian (National) artist. She loved her 'job', and it was a lifetime commitment.

Betty loved poetry - the contemporary and the classic. Betty loved literature - the classics and the moderns. Betty loved the Theatre - she went to everything (her secret pleasure was dance). Betty loved jazz. Betty saw every film of note, weekly, and some others! Betty kept her eye on the best of television, and necessarily the worst, as well. Betty was an astute critic of the actor, of production. Betty loved Radio National. Betty was intellectually engaged and politically astute - dare I say, a natural sceptic! Betty had one of the best Bulll-Shit Meters, I know - those students of hers had no trick that she didn't know about already- she had been taught by masters, she'd tell me in the staff room - and she always called them on it! Betty was no shrinking violet and she told you, fearlessly, her opinion without hesitation, if she deemed it necessary, and Betty had opinions on most everything. But Betty always had the integrity of her work, NIDA's work, at the forefront of her responsibilities and she was not afraid to confront the issues at hand if they were a danger to those integrities - ask any staff member, of any decade of her residency at NIDA, particularly, the last one.

It has to be said that Betty was sometimes a contrarian - a contrarian, really, just spoiling for an intellectual duel: "Betty, that is white." "No", she'd argue, "it is black." However, she was a champion of the under-dog, and fought tooth and nail for those that she felt were suffering under injustice, or, mediocrity. Her students, and sometimes other members of staff, today, ought to be grateful for her doggedness for justice, and the pursuit for the continued High Standards of Training (I am ), for, it must be recorded -  she would have insisted that I do so: "the buggers need to hear it" - that it did not always sit well with the Corporate Hierarchy of the "New NIDA". Best of all, Betty was generous and loyal to all who strove for the Truth, for informed Excellence - she admired people able to listen and learn - and for the effort of hard work, no matter the result - succeeding or failing, it did not matter. The honest trying was the thing she admired and treasured. If your effort was a success, it was merely a bonus to her, and she'd warn you "not to get a swelled head" about it.

Betty was born in 1925. She was 89 years, young (oops, a cliche, she would have hated). We had been guessing for years. None of us got it right! She never discussed it.

Betty's passing has removed me from an association that had made me one degree of separation away from Adolf Hitler. Betty had told me of her attendance at the Berlin Olympics in 1936, and watching the arrival of Hitler into the stadium - I was always in awe (still am) to have had a live connection to such terrifying history. I was never game to tell her that, of course. Betty, also, told me of her time, in the Blitzkreig, in London. It had been, among other things, an adventure for her and her child/teenage friends - she had loved the John Boorman, 1987 film, HOPE AND GLORY.

In the last decade of her time at NIDA, which was completed in 2011, we attended the theatre together, often. I remember her rapture over the Mnouchkine production of THE FLOOD DRUMMERS, at the Sydney Festival, in 2002, and of our journey to Melbourne to see, the same company give LE DERNER CARAVANSERAIL (ODYSSEES) in Melbourne, in 2006, and of her forthright (and hilarious) opinion of the architecture of Federation Square and its buildings! Fondly, I remember taking her on the ferry (I don't, and never have, driven) to the Riverside Theatres out at Parramatta, to see, a Korean Theatre Company give their delightful but peculiar version of A MIDSUMMER NIGHT'S DREAM. She, thank god, for me, loved it, for it had been some effort on her part, considering her gathering physical disabilities - "My FEET", she opined - to get her to go out there. This was a great woman who was curious and knew what she loved when she saw it, especially, when it was done with integrity and passion.

To finish this recollection of a dear, dear colleague and 'bar-raiser' for my talents and gifts: Betty was once a one-and-a-half-packet-a-day smoker. Some many years ago, she gave it up - believe it or not - cold turkey. It is a fond memory of mine to re-visualise the days when in her one-on-one tutorials in her office, on passing-by, seeing this Voice Teacher holding forth on some fine (or otherwise) point of speech erudition in a clouded and smelly room - sometimes with a student sharing all her offers - knowledge and tobacco. Those Were the Days! To understand what I mean, just watch the wonderful John Barton PLAYING SHAKESPEARE television series on Youtube, and witness Ian McKellen, Patrick Stewart et al. smoking away while demonstrating for us the way to approach and speak Shakespeare. Betty was just practising, along with the illustrious of The Royal Shakespeare Company, including her friend and famous voice teacher, Cicely Berry, her inherited approach to the Arts. It was/is a case of Awe and Shock for us contemporary teachers to persuade our students to give smoking up after watching the great doing it: the speaking of Shakespeare with such instrument eloquence and, also, smoking! "Cool".

Betty Williams' passing marks the end of another great of the cultural contributors to this country, unheralded for and to most, but loved by most she 'touched'. She would have hated that I have written this. "No fuss, no fuss, for god's sake", she would have insisted.

Much respect and love.

P.S. I apologise for the (undoubted) gorgeous photograph of Betty, at the top of the entry, but we could not find one of her in her muumuu dress,  knitted rainbow shawl and sandals - her preferred 'uniform". If we had found one, it, of course, would have been still gorgeous, but, for those of us who love her, more so.