This House Is Mine 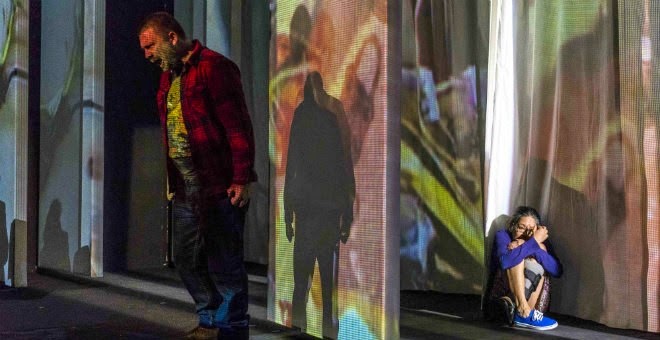 Darlinghurst Theatre Company presents a Milk Crate Theatre Production, the World Premiere of THIS HOUSE IS MINE, by Maree Freeman at the Eternity Playhouse.

From her notes in the program:


Milk Crate Theatre works by, with and for our community of artists who have experienced homelessness and social marginalisation. ... it is vitally important to acknowledge the community context from which this work springs.

The process of creating THIS HOUSE IS MINE began with conversations around the complex issues surrounding homelessness which led to the theme of mental health and the mind.
We held a number of creative developments where Milk Crate Theatre Ensemble (which is made up of the community) created characters, storylines, situations and provocations that would all form part of the evolution of a story and a script and we began experimenting with video projection content as a way to enhance our storytelling and provide an intimate insight into the minds of the characters on the stage.

With a working script, Paige Rattray took charge to Direct the production, guide and teach the 'actors' of the Ensemble and build and shape for an audience, incorporating the Video elements seamlessly, to produce a tight coherent arc and journey for the project. What I experienced with this production was a surrendering of my critical faculties as I was drawn absorbingly into the world of the characters that were created by these beautifully committed non-actors (except, guest performer, Contessa Treffone). There was a clear endowable sense of the real lives and predicaments of these people, and what I particularly enjoyed was the simple presentation of the symptoms of 'mental illness' - people who are experiencing mental and emotional distress - and the consequences of it on the lives of those people and those around them without dramatic overstatement. The performance was not only an insight, an elucidation, into a world that is, relatively, removed from me and mine, and one that I would normally avoid, but also a gateway to appreciate the humanity and suffering that these individuals, outside so called 'normal' behaviour endure, presented for me, without judgements.

There is no way to estimate the level of difficulty to package this work while watching, but in retrospective contemplation, one can only admire the achievements, the efforts, from all the artists, that has resulted is such easeful watching and useful 'education' that THIS HOUSE IS MINE delivers. Kudos of congratulation then to Ms Freeman for the organisation, editing of the explored material into this script, and to the Director, Ms Rattray, who have made a remarkable work. Sean Bacon, the Video Design Consultant, with the Video Artist, Sarah Emery, have collaborated to create a fully scaled set of beautifully abstracted images over shifting screens and back-curtain, accompanied by edited interviews of some of the 'creative' participants of the Ensemble, on a small television screen. This is accompanied by a complex Sound Design by Tom Hogan, surrounding a simple and pragmatic Set Design and Costumes, by Hugh O'Connor, in a Lighting Design, by Ross Graham, sympathetic in the quest to keep the audience involved, absorbed.

I always know that a work in the theatre has absorbed me when I find myself 'lost' imaginatively in the world and experiences of the story. This happened to me at the Eternity Playhouse the other evening. Congratulations and much admiration to all.
Posted by Editor at 10:39 PM