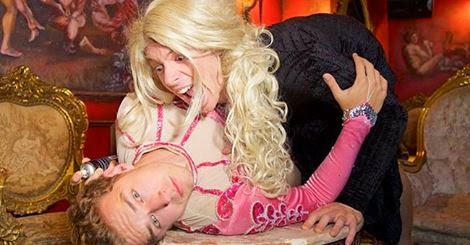 Brevity Theatre Co with the blessing of the Sydney Gay and Lesbian Mardi Gras Festival for 2015 have, according to the Director's notes, by Samantha Young, with her collaborators: programmed, procreated, pillaged and performed VAMPIRE LESBIANS OF SODOM, because Charles Busch, the writer said they could. This play is not unfamiliar to Sydney audiences - we have caught it before.

Whatever liberties this company have taken with Mr Busch's play, "one of the longest running plays in Off-broadway history", this production works best when the campy, but still 'hip' original text is at full bore. A loose mouthed litany of the usual campy dialogue that one has come to expect from Mr Busch (we saw a wonderful production of PSYCHO BEACH PARTY in 2012), of the rivalries between a couple of vampires that have lived on until the 1920's, and in the Hollywood movie making precinct, which  serves as the juicy 'bloodline' of the play. There are, too, some original songs by Composer and Musical Director, Matthew Predny that hit and miss the mark, variously - the Lyrics by Mr Predny, Ms Young and Eliza Reilly. The Scenic and Lighting Design are by Benjamin Brockman and is mostly, ambitiously successful, considering the 'awful' space he has to work in, while the Costuming, by Anthony Spinaze, is inventive and fun.

The company of actors Jamie Collette, Nicholas Gell, Pollyanna Nowicki, Olivia O'Flynn, and especially Skyler Ellis and Eliza Reilly are all having as much fun as the difficult space they are working in permits them. The show is blessedly short and leaves one amused despite the very difficult, uncomfortable audience space we are seated in - it seems to me to be a cabaret space rather than a practical theatre/play space. The performance must have something going for it for us not to notice, too much, the staging complexities and difficulties on Level 5 at the Kings Cross Hotel.

This production is a bit of rollicking fun, essentially, intelligently, well done. After the full hit of this team's chaotic mayhem, may I recommend that you borrow, Jim Jarmusch's 2013 film, ONLY LOVERS LEFT ALIVE, for a very sophisticated vampire story, set today, in the cutting edge underground music scene of Detroit and beyond, with Tilda Swinton, Tom Hiddleston and John Hurt! Boy, is it sophisticatedly funny.
Posted by Editor at 11:58 AM