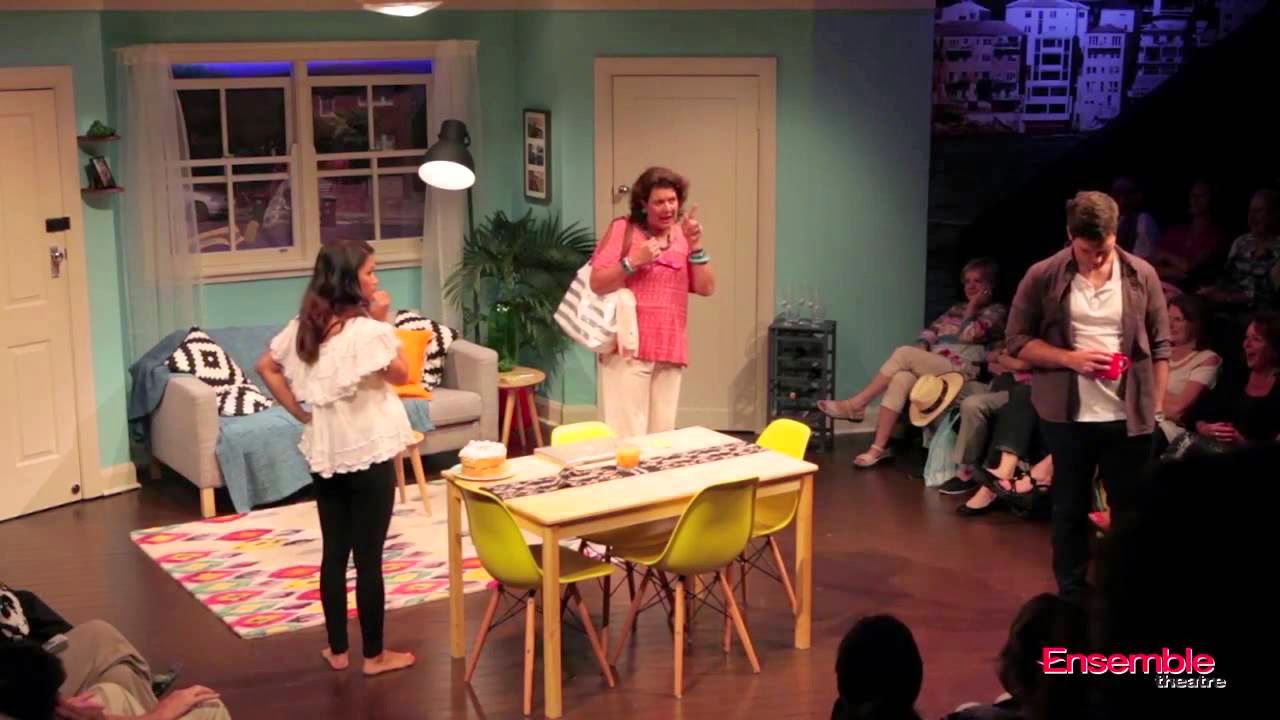 This is a catch-up post. I saw this production in early February.

DREAM HOME, by David Williamson, is a new Australian play. What was interesting, when reading about this play and its conceptual inspiration, was that it appeared to be about the not uncommon problem of new home owners, who after purchasing and moving into what they believe to be a dream home, instead, find it a nightmare, surrounded by neighbours that can make living there a catastrophe, a hell. We all have similar stories in the expanded web of our network of family and friends. Backpackers in Coogee, next door, on limited rental deals, part of my dread dilemma of daily living in my otherwise Dream Home! Mr Williamson mentioned his own family had participated in telling personal journeys of this modern dilemma, and that that had provided an inspiration point.

Paul (Guy Edmonds), an out of work composer and his new, heavily pregnant wife, Dana (Haiha Le), an up-and-coming director of Commercials, have bought and moved into an apartment in a small block of 'flats' in an old style building (Set & Costume Design by Marissa Dale-Johnson). In the living room we watch Guy meet the neighbours:  Sam (Justin Stewart Cotter), a Lebanese/Australian, working as a security entrepreneur - exhibiting all the stereo-typical 'racial' profiling in Mr Williamson's creation: a physical bully, obsessed with sex and a preening self and all of its 'haunting' insecurities, including, notably, his wife, Colette (Libby Monroe), a nearly played-out 'Cougar' on the prowl for an alternative to her husband, who happens to be an ex-partner of Paul's - yikes, what a co-incidence. Henry (Alan Flower), a sexually inadequate married to a sexually insatiable airline worker, Cynthia (Olivia Pigeot), and Wilma (Katrina Foster), a senior with a penchant for kleptomania and the odd suburban scam in the guise of good-neighbourliness.

This is, I understand, in the words of Mr Williamson, 'a light comedy'. And it is light in all ways except for the heavy respect for the demeaning comic cliche. DREAM HOME sounds often, and acts out, relentlessly, as if it were an episode from a seventies television sit-com e.g. MAN ABOUT THE HOUSE (1973 -1976) or its American version 'THREE'S COMPANY' (1977 -1984), or even more sadly, a comic sketch show such as THE BENNY HILL SHOW. For, so badly are the women viewed and motivated by the writer as mechanisms for the comedy in DREAM HOME (though the men, too, are no less antediluvian in their creation) that I often winced with shock that this was what was on show in a theatre in 2015, and was a new play, and being appreciated and laughed with, without much protest. The Ensemble Theatre is built on the waterfront and this production felt, embarrassingly, in the interval, for me, like an end-of-pier waterfront comic postcard from yesteryear - you know the Carry-On movie jokes and caricature drawings. While, I must also add, that the second act, with its many short scenes, seemed to need some urgent structural re-writing. Perhaps, having Mr Williamson also direct his own play did not give him the eye or ear of acute discernment, or the time, to be able to detect and repair the writing.

Best part of the evening was to watch Mr Edmonds, as Paul, more than deftly play with each of the other characters and situations that intruded into his living room, with a tireless energy and a dignified aplomb, to keep the play afloat. It was a highly proficient technical performance suffused with an insightful actor's intelligence (as to Mr Williamson's structural mechanism, I recalled a similar plotting ploy by Simon Gray in his play, OTHERWISE ENGAGED (1975) where a central character, Simon, while attempting to listen to some music (PARSIFAL), is continually interrupted by acquaintances with dilemmas in their lives that they think he can help solve). Mr Edmonds' skill came to a special sense of amazement, for me, especially considering the quality of the writing, in a long and slow-burning comic turn given by Mr Cotta, that allowed Mr Cotta to turn his 'typical' character, provided by Mr Williamson, inside-out, and find the subtextual monologue  to reveal a pathos for his otherwise FAT PIZZA/HOUSOS Sam, 'the leb'. The 'give and take' of nuance between these two actors was a lesson in comic construct and collaboration - making two humans out of textual figures of cliche ridicule.

Ms Foster comes off best in bringing some interest to her lady, Wilma, with comic technique and intelligence to burn, while Ms Le, brought gravitas of some kind of reality to the character, Dana. Ms Pigeot tackling Cynthia has nothing but cliche to keep her afloat - she managed it well, while Ms Munro as Colette, struggled to bring much to the role except the shallow superficiality of the writing.

I understand that the production was half-sold before the production opened on the reputation of Mr Williamson as a writer. I, too, considering the title and the reported premise of the play, and my respect for this giant in the Australian theatre landscape as a writer, had looked forward to the evening. Alas, one just reflected on the past achievements of this writer and came away thinking "How the mighty have fallen". I had, too, memories twigged of the Simon Gray play and wished that I was watching it again.

I guess it is really that old cliche: "Horses for Courses."