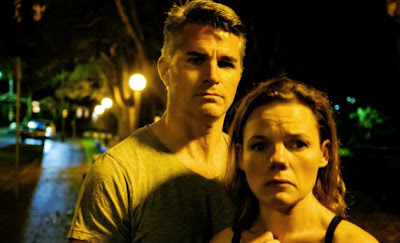 ANIMAL /PEOPLE, is a new play by Brooke Robinson. It is made up of two 'short-story' monologues addressed to the audience, that finally, interact at its end. The subject matter of the material is not necessarily of a very interesting nature and, though, explored with some detail, lacks any aesthetic arrest: husband/wife/son/dog/accident/ extended feelings of guilt ... ...

On the night I attended there were only 11 of us, watching. The two actors, Georgia Adamson and Martin Crewes, were valiant in their performance, but not without fluffed verbal entrances and 'untidiness', undermining one's admiration of their work, and distracting one from the concentration of involvement. Working in an abstracted Design by Dylan Tonkin, with over-worked but atmospheric lighting by Benjamin Brockman, and supported with a Sound Design by James Brown and Tom Hogan, Directed by James Dalton, the necessary exchange of attention between audience and performers failed to ignite.

The contemporary monologue 'fever' in the theatre in Sydney is boringly common. It requires an approach of disciplined imagination and execution from all the artists for it to work. I was captivated in this 'dreaded' mode of performance with GROUNDED - an 80 minute solo performance impeccably and energetically given and conceived. The contrast in the giving and receiving of these two works could not be more telling.

Still, thanks.
Posted by Kevin Jackson at 11:09 PM