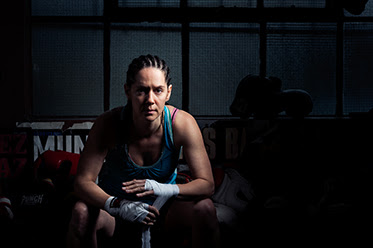 BITCH BOXER, is an award winning monologue from a young British playwright, Charlotte Josephine, written in 2012. Katherine Shearer after having seen it performed in the Adelaide Fringe, snaffled the performing rights and has found a creative team to support her ambition to present it in Sydney, at the Old 505 Theatre.

Like many a young artist in Sydney (check out, THIS BOY'S IN LOVE blog), Ms Shearer is showcasing her own talents, using her own resources, not waiting to be 'found', but getting on with it, and doing it. One can feel obliged, sometimes, to just get on board with these aspiring and yearning artists, and support them. It is an entirely admirable contribution to the offers of theatre experiences in Sydney. One wishes the principal companies e.g. the Sydney Theatre Company & Belvoir, for instance, had a policy to hunt out these shows, and find these artists who are risking more than their talents to be seen. Ms Shearer could take on one of the quotes from her character, Chloe, in BITCH BOXER: "Thing is though, I'm a fighter yeah and now's my time to stand up and battle on regardless." And, so, they both do.

The monologue reveals a young woman preparing for the Olympics in the Boxing arena, coping with the tribulations of life as well as the specialisations of her sport. The Clint Eastwood, 2004 film: MILLION DOLLAR BABY, which starred Hilary Swank, though plot-wise very different, prepares one for this experience. Set in a boxing ring Chloe tells us of her journey, and Ms Shearer in a fully committed and rigorous performance has transformed herself quite startlingly to create for us. It is Directed by Srisacd Sacdpraseuth, with support from Bethany Sheehan in Set Design; Lighting, by Christopher Page; and Sound Design, by Alistair Wallace. There is also a Multi Media element.

With the loss of the Tap Gallery, last year, as a reasonable, useful and inexpensive site to allow young and explorative artists to present work, the Old 505 Theatre is now a much in demand space.