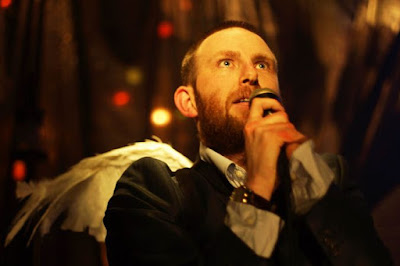 MISTERMAN (1999) is the third play by Irish playwright, Enda Walsh, that the Director, Kate Gaul has Produced and Directed for Sydney audiences. The achievements of Ms Gaul's work on THE NEW ELECTRIC BALLROOM (2005) and PENELOPE (2010) speaks clearly to the simpatico that she has with the writing and world of Mr Walsh.

MISTERMAN is a 55 minute Irish monologue. The technical demands of the play are immense and it would need a Director of some courage to engage with it. Ms Gaul, on the evidence of her last public work: THE VIOLENT OUTBURST THAT DREW ME TO YOU, was, perhaps, one who could meet the demands with all the versatile and imaginative daring that it needs. She does so with brilliant dynamism, even in this small space of the Old Fitz Theatre. A number of reel-to-reel tape recorders with pre-recorded voices of the village of Inishfree, a kitchen to cook and make tea, a crucifix made of flattened Fanta cans, a suit suspended in the air, and much else, are all part of the apparatus of the recollected journey that Thomas Magill makes on a fateful day where the religion of his character, and the world of his living, become embroiled in a twisted innocence that boils to a violence of outright frustration of the despair that the local 'weirdo' has in trying to bring the world to 'grace': "Sin has become our religion. Greed is our communion and evil is our good."

The other challenge to stage this work is to find the actor capable of playing a full-on journey demanding a fierce and versatile skill command and commitment to character, with easy entrance to flexible impersonation as Mr Walsh's Thomas Magill  makes a kind of Pilgrim's Progress from the 'City of Destruction' (this world) to the 'Celestial World' (that which is to come). Ms Gaul has called upon Thomas Campbell, an actor that has been a kind of muse for her. Think back to her work she has made with him: RICHARD III and PENELOPE to see the connection that they have with each other's talents and gifts. In this performance Mr Campbell delivers a bravura force of a 'corrupted' humanity with the delicacy of the innocent, right across the range of other 'landings', necessary to reach the opposite extremity of the tortured fury of the 'entrapped', with spectacular energy and the refined detail of an artist in full flight. In the tiny space of the Old Fitz, Mr Campbell presses you back into your seat and suspends you into the held-breath of wonder of live performance. This is a great performance and leaves one remembering the best of the work of Charles Laughton, in the masterpiece of his Quasimodo, in the 1939 film of THE HUNCHBACK OF NOTRE DAME, where the innocence of the 'baby' of humanity is twisted into the wrath of the injured, beyond control.

What is evident in this production is the joyful glee of the writer in the world he has captured, and importantly for us, the joy of 'doing' - creating - from the Director and her actor. One feels the respect and loyalty that both these Australian artists give Mr Walsh, and at the same time, the sheer exhilaration of presenting it. Mr Campbell clearly loves to do what he is doing with Ms Gaul and it is contagious. The audience, though devastated, is thrilled to have witnessed it. There is grace, modesty and skill. One feels awestruck.

One hopes that this work finds another opportunity to be seen. One hopes that both Ms Gaul and Mr Campbell find themselves centre stage for our growth as an audience- either together or separate, in the near future.

How I hate the monologue as a theatrical form! And yet MISTERMAN and GROUNDED have been two of my best experiences this year. One CAN teach an old dog new tricks, Kevin!