This Boy's In Love 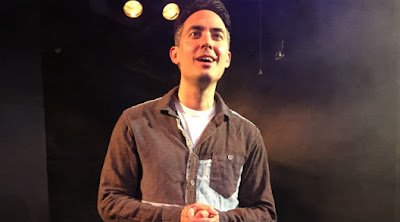 THIS BOY'S IN LOVE, by Adriano Cappeletta, at the Old Fitz Theatre, cnr Cathedral and Dowling St, Woolloomooloo. 26 May -31 May.

Adriano Cappeletta has written and plays in a Cabaret monologue called, THIS BOY'S IN LOVE, at the Old Fitz Theatre, as the late night show. In his Writer's Notes Mr Cappeletta says:


... THIS BOY'S IN LOVE is somewhere between my version of a gay rom com and a personal meditation on self-acceptance and letting love in.

Mr Cappeletta is an acting graduate of the National Institute of Dramatic Art (NIDA) and of a two year course with master clown, Philippe Gaulier in Paris. So, with an immaculate skill set and all the charm of a natural performer with an open heart loaded with wry self-observation and buckets of humour, Mr Cappeletta whisks us away into a narrative that employs text, song and dance. Funny, amusing with gentle loads of human pathos, it is a delightful experience.

I became a little restless towards the end of the showing, and felt it a trifle too long (at 10.45pm or so) - the puppet marriage song could be edited or lost altogether - I found it difficult to hear the lyrics and so what was going-on.

The work has been Directed by Johann Walraven, with Julia Cotton credited as the Movement Consultant. Daryl Wallis provides the musical persona on keyboard, and occasionally interacts with the actor with comic understatement, later joined by Bill Lloyd and his violin.
Posted by Editor at 11:02 PM