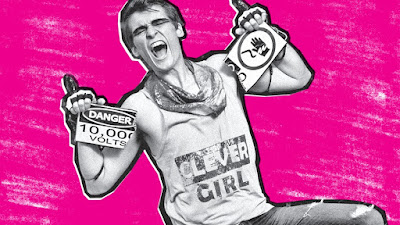 TRIASSIC PARQ, first appeared in 2010 and was produced as an Off-Broadway musical, in the Soho Theatre, New York, in 2012. It takes the story of Jurassic Park as a starting point and tells the story from the dinosaurs point-of-view. From Wikipedia:

It is all a great big little parody of a silly preposterousness, highlighting, for me, some of the U. S. of America's artists coyness around the essential naughtiness of featuring sex and 'dick' jokes as a spine for a 90 minute entertainment, revealing (perhaps, unconsciously) the culture's oh, so old hat, puritanical roots! (pun, perhaps, intended).  Give me SOUTH PARK, puleese!

What is best about this work, in the Reginald Theatre, is the grounded, serious production presentation by Director, Jay James-Moody, on a text that is basically a camp piece of 'flummery'- a nonsense. One step over the 'line' of good taste, concentration and commitment from anyone concerned with this evening in the theatre and everything could collapse into an agonising time for all. It didn't on the night I saw it, but there were some perilously close occasions.

Mr James-Moody's actors are finely disciplined, and sing up a storm with a very limited book and set of lyrics and music, by Marshall Pailet, Bryce Norbitz and Steve Wargo. The show begins, "KABANG', under the Musical Direction of Mark Chamberlain with the company of six: Keira Daley, Blake Erickson (tres camp), Crystal Hegedis, Rob Johnson (impressive energy), Adele Parkinson and Monique Salle (terrific), as various kinds of dinosaurs, belting out the company song, "Welcome To Triassic Parq" singing, moving and dancing (Choreography, by Dean Vince). The show hits a temperature immediately, and, really unfortunately, virtually, stays there, paralysed, in dramatic/comic tension, and flat lines until its finish, with "We Are Dinosaurs.". It is a basic problem of the writing, for it is only a one joke show with increasingly tedious variations, and is kept afloat here, admirably, with nothing truly possible -memorable - except the chutzpah of the performers, all.

The Set Design, by Neil Shotter, is basic, mobile - lots of palm tress on wheels and movable fence - and kind of fun. The Lighting, by Mikey Rice, is distractingly 'busy' (thanks goodness). The Sound Design by Jessica James-Moody is as usual, just great.

But why do this show? Why do it? Why? Why? Why? TRIASSIC PARQ is for the dedicated Musical Theatre 'tragic' only  - the rest of you may have all your prejudices about this theatre form diabolically confirmed. The integrity of the production and performance values of Squabbalogic  are as high as ever, it's just that the material is not really worth one's witnessing.  In my books, Squabbalogic Independent Music Theatre has a tremendous track record: e.g. CARRIE THE MUSICAL, THE DROWSY CHAPERONE, SONDHEIM ON SONDHEIM and THE MAN OF LA MANCHA. There has to be better work than this to do, doesn't there? What about one of those neglected musicals we've seen in past years up at the old Darlinghurst Theatre, SHE LOVE ME, for instance?


All artists on-stage and off are providing their services to Squabbalogic's TRIASSIC PARQ without benefit of award-wage payment for this production. All artists have been guaranteed a modest minimum fee against a share in net income. Squabbalogic and its producers do not earn any income greater than an individual artist for this season. Squabbalogic gratefully acknowledges the time, talent and contribution of our artists and volunteers to this co-operative production and hope you will continue to support professional and emerging independent theatre for growing companies to adequately compensate artists in the future.


Loyalty and Good Wishes may be reason to go. One would not want to lose Squabbalogic from our theatre scene.
Posted by Editor at 11:53 AM