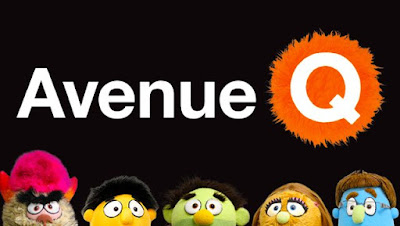 AVENUE Q, Music and Lyrics by Robert Lopez and Jeff Marks, Book by Jeff Whitney, based on the original concept of Robert Lopez and Jeff Marks, is back in Sydney, under the banner of a new Production Company: Luke Wesley and LCW, at the Enmore Theatre, for a very short stay. I recommend that you go. The 'blues' of the day will spin away for the time that you spend in the theatre, for sure.

First seen in the USA in March, 2003, Off-Broadway, it moved onto Broadway in October of that year and stayed for 2,534 performances. It won three Tony Awards - including Best Musical - and, after closing in September, 2009 on Broadway, re-opened a month later in another Off-Broadway space: The New World Stages, and is still going! This is a show that audiences love, love, love. This LCW incarnation of AVENUE Q is not the first production of this musical seen in Sydney. If you haven't seen it, go, and if you have seen it, go again, This time it is Directed by Jo Turner (he recently gave us another old Broadway hit, DEATHTRAP), and it is just as charming, topical, and abrasively funny, as ever.

The show has three human characters and eleven puppet characters, and is set in Avenue Q, a not-so-smart part of New York city with a neighbourhood of young fledgling adults finding their way in the real world. There are more than shadows of Sesame Street in this show - although there is no claim of similarity - both in setting and characters. The whip-smart Book and Lyrics deal with the time of generational growth that these characters, having moved from childhood, when and where they were told they were "special ' and "you can do anything", to the adulthood reality of a need to look for a "purpose",  imbued with the slow dawning that maybe: "It sucks to be Me".  A metaphor between the Sesame make-believe world of childhood fancy and that of the Avenue Q reality. Most of us have had that surprising jolt, journey.

Jo Turner, in his program notes tells us; "...Q feels every bit as fresh, contemporary and funny as it must have in 2003". I saw the show in 2003, on Broadway, and I can confirm that what Mr Turner has said is true of the Enmore stage adventure. The show in its own inimical way deals with racism (Everyone's a little bit racist), Pornography (The internet is for porn), adulthood (What to do with a BA in English), homosexuality (If you were gay; My girlfriend who lives in Canada) and Schadenfreude (Schadenfreude), indeed, the full breadth of early adulthood experience - watch out for the alcohol drinking contest with Long Island Teas followed by very active puppet sex in  Princeton's apartment with Kate, later (You can be as loud as the hell you want), an idea coming from two characters (my favourites) The Bad Idea Bears!

This show is for adults. It is no surprise to note that Trey Parker and Matt Stone of South Park fame, the creators of the musical THE BOOK OF MORMON, have drafted Robert Lopez, the conceptualiser and lyricist of this show, as a co-writer of book and lyrics for their's. (THE BOOK OF MORMON is opening in Australia in 2017 - a full six - six years - after the Broadway showing began! Don't you feel Australia is in the vortex of the here-and-now that the rest of the world is in? NOT. Where, oh, where is the Harry M. Miller of these days? Maybe, Mr Wesley and LCW?).

The puppet actors are visible manipulators of the puppet character and it is part of the creative 'magic' of the show that we participate in this suspension of 'disbelief' to make the show work. The show in that way is inter-active - ha! This company of performers are great, and tireless. Matthew Predny, as Princeton and Rod, is terrific, Madeline Jones, as Kate Monster and Lucy T Slut, equally impressive, and boy, can they sing. But all of this team are in tune with the spirit of the show in an amazing way. Justin Smith (a human, Brian), Nicholas Richard (Nicky, Trekkie), Rowena Vilar (as human, Christmas Eve), Shauntelle Benjamin (a human, Gary Coleman), Julia Dray (Mrs T, Girl Bad Idea Bear) Owen Little (Boy, and Bad Idea Bear), Kimberly Hodgson (Nightmare Kate) and Riley Sutton (Nightmare Princeton and Newcomer.)

Leading the band, playing this Tony Award winning score, is Shannon Brown, with all the canny confidence that the lanky brashness and charmingly melodic music score, allows.  The Enmore Theatre is not necessarily a comfortable stage space for a musical, but the Set and Costuming controlled by Cat Raven is enough to assist our engagement, although the Lighting by Ross Graham is not always amenable. Puppets are by Promotechnics and are seductive, brought to life by the company of actors, with Puppetry and Movement Director, Alice Osborne, in charge.

A really guaranteed fun night out. It will give your winter night a beautiful glow of pleasure and more than a few laugh-out-loud memories. Go, I reckon. There are two ice cream parlours near by, worth hunting out, too - a fitting topper to the fun of AVENUE Q.
Posted by Editor at 9:12 AM