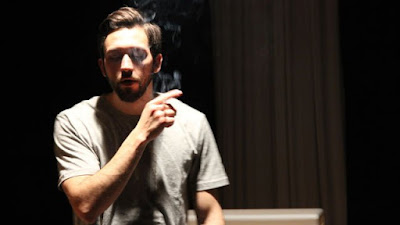 The play is written in a one act mode but with 23 scenes. It begins with Edmond, a white white collar worker having his fortune read. He leaves the shop and leaves his wife and proceeds on a journey, a Pilgrim's journey, through the decrepitude of the New York landscape of the late 70's - early 80's, meeting his fate in a spiral of diminishing returns until murder and imprisonment and sexual degradation takes him to a place, a few years later, where his cultural prejudices have been subdued enough for him to share a cigarette with his companion in prison, kiss him, and sleep beside him, even if he is black. The play is an uncompromising descent into hell for any turbo-charged white male (and others) and Mamet risks much in writing Edmond in such a powerful way.

This production by Two Peas has only four actors playing all the roles. Oleg Pupovac presents a charming 'host' as Edmond and persuades us to pay attention to what happens to him, subtly holding our empathy even through the worst of his personality and his adventures. Such it is that we are made criminal too, for having participated with Edmond, witnessing him - it is a kind of devil seduction. Mr Pupovac manages it well. Tara Clark, Cheyne Fynn, Naomi Livingstone, play all the other characters, and it is quite a challenge: some of the characters succeed, some of them don't. Some of them are a surprise, some of them are repeats from the one we've seen before. Hey, they give it a go! (It is much like the problem with the budget-conscience casting of the STC Caryl Churchill LOVE AND INFORMATION - too many roles for too few actors to sustain originality or with consistent conviction).

The set design is quaintly thought out for this space, and though it crowds, allows the hectic changes to happen with a minimum of fuss. Director Glen Hamilton has kept the actors under a choreographed leash but, relatively, neglects the control-freak necessities of the attention to detail of the writing by David Mamet. It needs much more edge and ferocity, precision to every comma, to justify the horror roller coaster ride of Mr Mamet's creation.

Says the hand-out bill from this company: "Perhaps Mamet's most divisive play, you will either love or hate Edmond, but you will never forget him."

Knowing the play well, I was dreading the experience of seeing it again. I have to admit that I was quite able to endure it - the production is 'relatively, a 'soft' take on the material. A brave choice bravely done. Up to you to take it on.

There is a film version with William H. Macy as Edmond (2005). It was not necessarily a critical success - it is a tough experience.
Posted by Editor at 10:26 AM