Egarr and The Golden Age 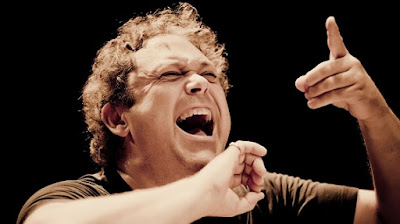 Australian Chamber Orchestra (ACO) present EGARR AND THE GOLDEN AGE, at the Concert Hall, in the Sydney Opera House.

Richard Egarr has been the Music Director of the Ancient Academy of Music since 2006 and is, for a second time, the guest artist with the Australian Chamber Orchestra (ACO). The sheer ebullient joy, the irrepressible spirit, that Mr Eagarr radiates to the orchestra and audience combined with a keen love of music, especially in his area of expertise, was an added bonus to the expectant pleasure of being at an ACO concert once again. One never leaves an ACO concert in any mood but exaltation, so it was with this concert of The Golden Age, the last of this Australian tour, in the Concert Hall, at the Sydney Opera House.

Mr Egarr began with a selection of short pieces from Henry Purcell's THE FAIRY QUEEN, some of the 'incidental music' he wrote to accompany Shakespeare's A MIDSUMMER NIGHT'S DREAM, in 1692. To some, it beguiles one into a deep memory of Englishness, to those hearing it for the first time it could be a gossamer revelation of gentle beauty. I remember way back in 1971(?), hearing and seeing this work presented musically, in full form, by Roger Covell with his orchestra and singers, with the play staged by Aubrey Mellor, using the second year National Institute of Dramatic Arts (Angela Punch and Andrew McFarlane, two of the actors),on the campus of the University of New South Wales.

To follow was a short work (5 minutes) by William Lawes: FANTASY [No.1] from Consort Set in 6 parts in C major (c. 1635-41). It is a complex and relatively dour piece, written for the Caroline court. For most of the audience it was an introduction to a new composer, that Charles I, on hearing of his death on the battlefield, at the Siege of Chester, named him "the Father of Musik', which was part of the delight of Mr Egarr who has declared: "It is one of my absolute desert-island pieces ... it is sublime, complex, passionate and utterly English." The contrast between the Purcell post-Cromwell work, and this pre-Cromwellian work, could not have had more starkness for the ear and our sensibility.

To finish the first half of the concert we heard  CONCERTO FOR VIOLIN IN A MINOR, BWV1041 (c. 1717-23) From the program notes: "In this conventionally three-movement, Venetian-type concerto, the central movement is flanked by two fast outer movements. ..." The violin solo part was taken by Satu Vanska exquisitely, and she seemed to be channeling the inspiration of the composer directly, with a profound and transformative physicalisation in the 'feeling' of her way through the music. The second movement:Un poco Adagio, her playing was a sublime thing. It was a most wonderful thing to participate with - to hear.

After the interval two works by Joseph Haydn. The first was CONCERTO FOR KEYBOARD IN D MINOR, Hob.XVIII:11 (c.1780-3?) On a period pianoforte (the work could be played on harpsichord as well), Mr Egarr gave a captivating performance. The piano sounds were immensely diminuendo, soft and graceful to the ear. Two oboes and two valveless horns were part of the orchestration - giving a sense of period and authenticity to the sounds. Influenced by the then fashion for Hungarian Gypsy music, it was written for the Esterhazy court of Vienna. Sitting in the Concert Hall, listening to such complicated and sophisticated music around the corner, and up the street, within walking distance of where the first fleet under the command of Governor Philip had - a little time after the composition of this work for the Austrian Empire - its primitive buildings, tents and convict settlement. One is struck by the contrasts of culture and the idiosyncrasies of time, through time. It is a wonder! (this work was made more arresting after, a short, amusing introduction to the period keyboard, the second of the concert, and its 'tricks', from an amused but informative Mr Egarr.)

To finish: SYMPHONY NO.44 IN E MINOR, HOB.I:44 'TRAUERSINFONIE' (c. 1771?). Mr Eagarr introduced this work as ' a head-banger' of its period and invited us to 'Hold onto our seats.' "It is," from the program notes by Anthony Cane, " in many ways the crowning achievement among many intense and stormy works Haydn wrote as he approached middle age. ... ." It is has been conveniently labelled one of the Sturm und Drang (storm and stress) compositions (nothing to do with the literature movement known under this banner - it came a little later.)

As an encore, after a tumultuous and warm 'strum' of applause Mr Eagarr and the brilliantly alert and 'happy' ACO gave an encore of some Mozart. The buzz of satisfaction murmured throughout the Hall and into the foyer, and out onto the street as we moved down to Circular Quay, where once in 1788 The First Settlement landed, was loud and joyous. In amongst that 'present time' and 'past time' contemplation I wondered when first did this primitive colony hear the Haydn for the first time.

Thanks to The ACO, again. Life can be sometimes great, in these tense times, in 2015. Music, that magic mode.
Posted by Editor at 9:58 AM