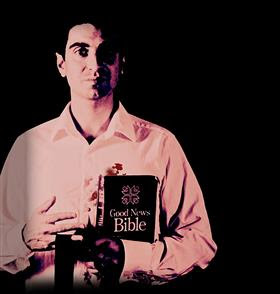 Take Note all: GRACE is the first production in a new theatre on the Sydney scene: Pulse Group Theatre.

GRACE was written in 2004, and had its Broadway debut in 2012. It is written by Craig Wright, an American playwright not seen in Sydney before, (he has written many plays), whereas his television writing in SIX FEET UNDER and BROTHERS AND SISTERS, we, possibly, may have.

GRACE introduces us to Steve (Joseph Addabbo) and Sara (Nikki Waterhouse) two members of a religious 'cult' who have come from Minnesota to Florida to spread the 'Word', and open a chain of motels called "SONRISE" using the logo, "Where would Jesus stay?" Steve is waiting for his principal business partner to bank the $9 million to get the building started. Living next door is an ex-NASA researcher, Sam (Jeremy Shadlow), who has had a tragic accident, killing his fiancee, and damaging his face. He is an atheist.  Steve zealously attempts to bring Sam to the 'Way', the spirituality of the love of Jesus, whilst Sara following the Christian ethic of 'loving thy neighbour' does just that in a gently physical way. When Steve's partner fails to come-up with the money and he finds himself, personally, liable to the banks, and discovers that his wife has deserted him for the atheist/scientist, the collapse of the two cornerstones of his personal faith: Capitalism and Christianity, explodes his world, and he falls from GRACE, murdering the two faithless ones and himself.

"Is there a God?" "Is there such a thing as the benevolent oversight of a higher power?" These two (for some of us) bluff questions are asked in a cleverly gentle manner with a wickedly subtle black humour by Mr Craig, and the play, in performance, is surprisingly easy. There are some theatrics in the use of time - we begin the play with the murders and then have a re-wind effect to take us on the journey to explain how we got there, (this 'trick' is employed several times). The language of the play is full of ironies and observations of real life that constantly cause chuckles of identification - the authorial use of telephone monologues, to point out the frustrations of modern life devices, e.g. the Internet, are 'terribly' funny familiar. Add a pest exterminator, Karl (Dudley Hogarth), who turns up in the scenario of the play at fortuitous moments, (is he otherworldly?) full of wry observations and a fulsome personal history of the loss of his family in the Nazi holocaust, and the overarching, possible, belief in a benevolent power gets a severe shaking.

The production, in this new theatre space, Directed by Billy Milionis, is beautifully controlled and gently articulated. The setting of the play is handsomely appointed (no Designer signified), with the one room being used for both apartments so that the characters' entwining/isolation is, amusingly, counterpointed. The acting from all four of the actors is, mostly, extremely enticing and the human dimensions, pain and craving of their characters is exceptionally believable. Mr Shadlow, as Sam, has an internal registering of his character's pain that carefully releases under the soft 'love' that Ms Waterhouse conveys with aching gentility - the playing between these two actors is beautiful to watch unfold. Mr Hogarth, as Karl, has all the twinkle of a man who knows more than he should and who wants to temper the anguish of others around him. Mr Addabbo is mostly, convincing, but plays Steve with a kind of frenetic energy that seems to cost him, the actor, personally enormously (he appeared to be overcome with a dizziness, in his curtain call from the passion of his playing.) It reminded me of having seen him in action before, in GLENGARRY GLENN ROSS, where he, demonstrated an overwrought commitment to the task of playing, to, sometimes, the expense of the character's life on the stage.

The Pulse Group Theatre is a new space that the Artistic Director of The Actor's Pulse, Billy Milionis, has opened up as an alternative space for the Co-op movement in Sydney. The recent loss of the Tap Gallery and further back, the Downstairs Belvoir space, as a place to play at reasonable cost, has thrown the opportunity for young artists to practice their skills into a kind of fraught chaos.This theatre is extremely comfortable and appears to be around the same capacity as The Old Fitz, with a small but useful stage area, at a location easily got to. Worth enquiring about with great thanks to the Actor's Pulse.

GRACE is a very creditable debut. The play fascinating, the production fairly impressive, in all ways. Keep an eye out for future work.
Posted by Editor at 7:50 PM