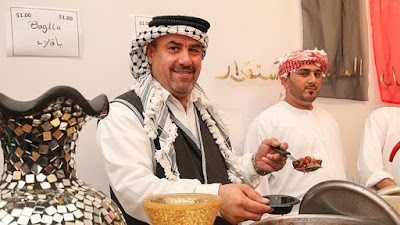 LITTLE BAGHDAD: LET'S PARTY LIKE IT'S 620BC, was presented by Powerhouse Youth Theatre (PYT) in association with STARTTS (Service for the Treatment and Rehabilitation of Torture and Trauma Survivors.) It is a festival developed in collaboration with Fairfield's Iraqi community. Hosted by Layla and Firas Naji, it is the second iteration of Little Baghdad, bringing together artists, community members and first time visitors to Fairfield in a unique celebration of the Iraqi-Australian experience.

A friend and I went on Sunday. Bus, train, and bus again, because of track work. It was the beginning of winter as I remember it as a kid. Thank goodness I had wrapped up well in my new duffle coat, hat and scarf. But once in the venue nothing but warmth on all levels of meaning.

There were Dominoes and card games, there was a video on display alongside a durational painting work by Ali Hamidi, some installations by Nicole Barakat, Sean Bacon, Cigdem Aydemir and the Undrawing the Line cooperative. One could get one's name transcribed in the sand by an Akkadian and Assyrian scribe (Oliver Slewa - "The Assyrianologist" and assistants).

There was a dance performance by Welyam Geylana and Bhenji Ra. A (brief) lecture (wished for more) on the history of Iraq and Baghdad and of the community living in Fairfield by Oliver Slewa - in real life he is a practicing solicitor - an active member of Assyrian Youth organisations, associations and religious institutions. Three Slam Poems performed for us by Reewan Al-Mahana. The screening of a commissioned film '1001 NIGHTS IN FAIRFIELD' which told stories of refugees here in Fairfield, by Zanny Begg, featuring the Choir of Love. There was a folk dance group that performed for us accompanied by Bashar Hanna and the Choir of Love, live - we were invited to join in. Finally, there was an Iraqi Hachaa performed by Tania Hanan. Accompanying all of this over the three hours was Iraqi food and tea - delicious - prepared by The Parent's Cafe. A group in cultural dress taking great care of us - it has many activities immersed in the culture of Fairfield.

We had a very absorbing time. We had hoped that the Food Safari was going to tip us off on where to get the authentic variety of food. Unfortunately, too much of Fairfield was closed (it being Sunday) for it to happen - next time. However, we were directed and we found a wonderful restaurant and we ate the most amazing meats and very simply dressed salad, with tea, in a gorgeously simple but authentic like environment.

This work was shared with a constant buzz from the locals in Iraqi dress, excited with all the events, and inclusive with us who were visiting. Karen Therese is the Artistic Director of Powerhouse Youth Theatre, and this is the second 'adventure' I have made out to Fairfield to learn and share with a part of my community in Sydney that otherwise I would never know how to meet. Ms Therese first came to my attention out at Campbelltown Arts Centre in 2008, when I saw a performance piece that she had developed with part of that community called, THE RIOT ACT. It was sensational - one's senses were stimulated, stirred and shaken. Not ever forgotten. One wished that it could have been seen by more people. At the moment Ms Therese is also one of the Studio Artists at the Griffin Theatre and there may be a work that PTY and Griffin will share next year. It is in this Community work that one can see the value of ART as a tool for communication for the health of a people, of a nation. Pioneers like Karen Therese (and there are many others) need our support, appreciation and curiosity for what they are doing at Fairfield and elsewhere. It is invaluable - beyond the tick-boxing values of corporation and government organisations.

Thanks to you all for an immersive afternoon.
Posted by Editor at 9:57 PM