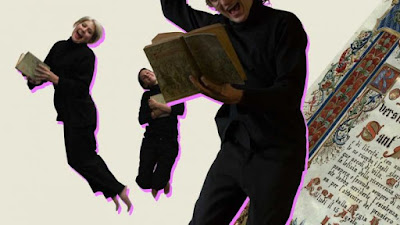 If, when you see this show's name – THE CANTERBURY TALES –  and you think of Chaucer (1343-1400): the father of the English language; the greatest English poet of the Middle Ages, with Royal Patronage from Edward III, Richard II and even Henry IV, forget it.

If you think of the 1968 musical version, too, forget it (anyway I've been told, great book, now dated music and lyrics).

If you think it is some inspiration based around the Pasolini, 1972 film, part of the trilogy that he made along with  Boccaccio's THE DECAMERON (1971) and THE ARABIAN NIGHTS (1974), forget it.

If you imagine that this, THE CANTERBURY TALES, is made up from tales of the Rugby League Bulldogs, Canterbury-Bankstown football club - because there has to be some eye-and-ear-popping tales out there, surely? - even if they are out of 'school', I have to 'tale' you, again, forget it!

What is this then at the New Theatre? A hijack of a famous title to catch your attention in the vein of Belvoir and their THE GOVERNMENT INSPECTOR curation of last year, to attract your attention and buy tickets? Could be.

However, unlike the Belvoir THE GOVERNMENT INSPECTOR, there is some residue of the original inspiration on the stage, for we do begin the evening with truncated tellings, with hand puppetry, of two of the Canterbury Tales: The Miller's Tale and the Summoner's Tale. There is even an attempt to tell some of it in Middle English! What then transpires is the transporting of the show into a kind of lame 1960's Tonight Show, led by an incompetent host, with old-fashioned clip board, introducing us to a series of variety acts. Four camera men appear, and broadcast onto four screen monitors above the front 'arch' of the stage, four other points-of-view, beside one's own, to attend to what is happening. You could choose where to concentrate your gaze, in this modern mediated world. I, mostly, elected to 'edit' my own view with an attentive preference to watch the show as a theatre project, other than through some other intervening editorial eye on a screen. Others watched the screens and so the audience was often in a fractured (sometimes bewildered) appreciation. There would be eruptions of laughter that did not necessarily correspond to what the 'naked' eye was apprehending, but on direction to one of the screen monitors would find justification, as when, for instance, a live image of a stupefied, bored stager was captured and 'focused-on', staring (drooling) completely absent-mindedly, into space at the centre-stage action.

Besides a principal company: Ryan Carter, John Grinston, Sarah Jane Kelly, Zoe Jensen, Andrew Lindqvist, Marty O'Neill and Danielle Stamoulos, who have worked, improvised, with the Creators and devisors of this project over  several months: Constantine Costi, James Vaughan, Michael Costi, to form the bulk of the superstructure and content of the 'TALES', some other Performers from the Community of Sydney have been shuffled into the evening. A totally amazing Yoyo wizard, Brandon Vu, beguiles us with a ten minute-or-so expert (and comic) stint to a classical music track; a magician, Dale Trueman with spiel and a 'scroll'; a hypnotist, called Etienne, who attempts to demonstrate his skills via Skype (!); two street corner spruikers, the first, Mark Avery, who talked, on my night, at least, of the necessity of not buying into the present day culture of the need to succeed, and so avoiding the Pass Or Fail test, while the other, Steve Maxwell - in a  period Top Hat and black Dress Coat - talked, in this instance, of the horrible entitlement of politicians, as exposed by Bronwyn Bishop, of late (although, Steve, insisted on calling her Julie Bishop - not to worry, the Abbott knows the truth and differences between these two Bishops, I guess).

The 'conceit' of this production, it seems to me, springs from the premise of Chaucer's Canterbury Tales, where some pilgrim's resting in local inns on the way to Canterbury Cathedral spontaneously tell stories from life to amuse the others. So, here, the Directors have pilgrim's in the midst of their contemporary lives, not in an inn but a theatre, simply telling tales from their daily 'adventures', showing us their 'special' vaudevillian-like skills, IF they have any. John Grinston and Marty O'Neill, for instance, give an hilarious Orton/Pinteresque/Monty Python verbal duet of two ordinary Aussie blokes (guys) jabbering away for some (amusing) time, simply to pass that time, about nothing, while behind them a sinuous dancer, Sarah Jane Kelly, tap dancers and poses, with the four-strong camera crew capturing what they like for the screen.

The pell mell pettiness that occupies so much of our daily life consciousness (or comatose unconsciousness) combined with our degraded vernacular language, along with the tawdry 'empowerment' that the community has been endowed with: that we are all artists (whether we have Craft skills, or not) are the intellectual highlights of these artists' focus and 'missionary' efforts to gently expose. It is, for example, a very precious observation when one of the camera men decides to turn the camera around onto himself to create a video-'selfie' on the monitor, while he sings centre-stage, acapella, an Italian operatic aria - contemporary narcissism at its most egregious and hilarious! This show is full of deliberate chaos and mediocrity - the Host Kirin J Callinan/Roy Molloy, is an abundant packet of hopelessness that epitomises what some of us suspect the present DIY culture encourages and celebrates - the Voice, Talent programs, the Cooking shows, the Home Renovation shows etc, etc etc, ad infinitum. It all leads, cumulatively, to a surreal arrival of two inflatable sharks, guided electronically into the auditorium above the audiences head.

Although this production of THE CANTERBURY TALES is very rough-and-ready, one understands this iteration, at the New Theatre, of these offers, is the first workshopping in public of the 'conceit', so it flops and flays, runs and staggers, hits and misses to be (delightfully) all over the place, but it has, as a fuel, some  improvisationary zest of a real deliberateness of style and manic chutzpa (The Marx Brothers, are you channeling?) Well done. The brazenly committed performances of all the company certainly reveals a confidence in the Creators and their off-the-wall intentions. I was reminded of the fabulous company, Nature Theater of Oklahoma, that has performed at the Sydney Festival and the Melbourne Arts Festival: NO DICE in 2009; LIFE AND TIME. EPISODES 1-4, in 2013 - and I love them a lot.

Constantine Costi (and his brother, Michael) came onto my theatre-going radar in 2012 when I saw a production of his THE MERCHANT OF VENICE at the Genesian Theatre. I was surprised and dazzled by the concept of his production (as well as the skill he showed in eliciting verbal dexterities from a fairly diverse company of actors) - it had a game show-talent show format for the Portia love casket stuff and a glitzy parody of Fellini territories (not, I've since gathered, an original idea). Both 'pastures'  of creativity seem to be a 'core' inspiration for his work. Subsequently, Mr Costi has studied, and although, the next work of his talent I saw, slightly derailed my faith in him, with an over-stuffed adventure/production of a one-act Shaw joke - THE SHEWING-UP OF BLANCO POSNET - his vivid, weird imagination, his love of language and his people skills, theatrical intelligence (and love), promise much. We shall see. The balance of imaginative 'flares' with a discipline to text with a sensitive appreciation of capturing an audience, is an act that needs constant vigilance.

This is a madness - a provocatove tonic de jour for some of us.

This work seems, to me, especially relevant, with the Sydney Fringe about to, again, descend upon us, in September. An event that certainly encourages all to be public artists - whether skilled, talented, or not - and we , generally trust, that friends and family will support and 'love' them, whatever they've done.
Posted by Editor at 10:13 PM