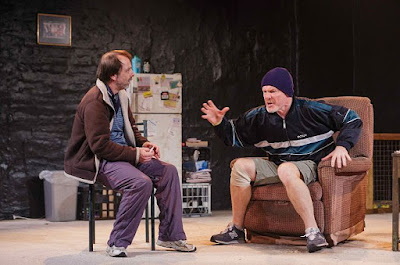 THE DAPTO CHASER is a new Australian play by Mary Rachel Brown. It was commissioned by Illawarra's Merrigong Theatre Company, in 2011. Dapto, a suburb of Wollongong, has a 'famous' greyhound race track. The play concerns a family, the Sinclair's, and their greyhound connections, ambitions and dreams.

Horse racing is known as the Sports of Kings - presumably relating to the cost to engage in such a sport. The racing of dogs, greyhounds, is, mainly, in Australia, the domain of the 'working man', offering the 'competitor-minded poor' with the possibility, the dream of finding wealth through its practice. The Sinclair family: Errol (Danny Adcock), Jimmy (Jamie Oxenbould) and Cess (Richard Sydenham) have, at last, found a dog of promise, 'A Boy Named Sue', and have lavished care, a kind of love, to the pursuit of that nirvana, hope. Errol dies and the two sons discover that the family is in deep debt - literally their fortunes have 'gone to the dogs' - not even enough money to bury dead dad, and that their only prospect to do so is to sell their dog to the family nemesis, Arnold Penny (Noel Hodda), one of the officials (stewards) of the local track. The play is about family, money, gambling, addiction, dogs and the desperation of poverty.


I don't believe in the old adage about only writing what you know about. I think you should find out what you're interested in and write what you care about. What got me was the sense of family and loyalty among these men and women to each other to the sport and to their dogs (although there are no women in the play - but, 4 men and an invisible dog). When you line that up with the pressure of gambling and the financial high stakes, you have the potential for real drama." [1]. She headed to the Dapto Greyhound Racing Club : "I hung out there for a few weeks. I drank with them and gambled with them. People would ask, why are you a woman, writing a play about this world? But for me, it really was a unique experience. Just being a woman in my late 30's, hanging with a bunch of old blokes who weren't my relatives. How often does a girl get to do that? It was really fun. [1]

The play is a relative routine melodrama in structure, peopled with some cliched observations of these men in a fairly contrived set of situations. The dialogue is redolent with 'ockerisms of Aussie' speech that sounded self-conscious in its striving for veracity and comedy. It may have needed more than 'a few weeks' for Ms Brown to have captured the vocabulary and musicalities of the community she was meeting and studying.

The production, on the other hand, has some sincere and affectionate layerings from all of the actors, all creatively 'dressing' these caricatures with the trappings of real people (the inventive courage of the Australian actor at work with a text that I felt was not really accurate, 'true'), with Mr Oxenbould, particularly, arresting, in a beautifully controlled 'character' performance of some dimension as put upon Jimmy. The actors, here, making a very fine and necessary contribution for the success of the production.The Director, Glynn Nicholas, says he is a pedant for mime, and has the dog of the play, 'a vital fifth character', mimed by the actors to bring it to life - it became, for me, a little over-imposed a 'trick', and an uncomfortable distraction in the realities of all else in the look of this production, for the Design, both Set and Costume, by Georgia Hopkins, had the power of the 'truth' of suburban poverty - the worn carpet and the dirty chair - that kept me inside the evening in the theatre. (Mr Hopkins has made a substantial and consistent Design input to her work on the Sydney scene, I note her work on the recent, THE HOUSE OF RAMON IGLESIA and BOOK OF DAYS.) The bleak Lighting Design by Toby Knyvett adding greatly to the affect.

I am out of step with most of the reaction to THE DAPTO CHASER, and I recommend that you check out Stage Noise with Diana Simmonds or Eight Nights a Week, from Jason Blake, to get the enthusiastic point-of-view. I was hugely disappointed and only a little engaged with the play, but then my mother's family, Irish-Australian dreamers, were greyhound dog owners, and I, as a kid, was part of the training regime of my Uncles' dogs - I even remember travelling to Richmond, Dapto and Bulli in the back of the 'shaggin' waggon' with the dogs, to race and train, after a long night/morning of washing taxis at a garage in Bondi Junction. We never had a  good enough dog that ever got us to Wentworth Park. My Uncle's dogs never made any money but we had lots of dog 'friends'. The recent scandals concerning the training of the dogs, in the Greyhound Racing Industry, have a very long history of action. I remember.

Go, see THE DAPTO CHASER and judge for yourself.