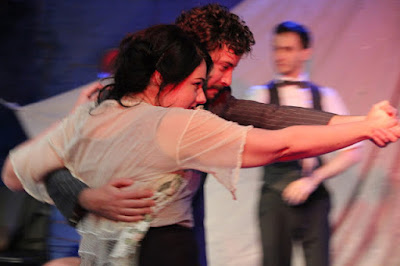 THE ISHMAEL CLUB by Bill Garner and Sue Gore, is an Australian play from Melbourne. The Ishmael Club was a bohemian pledge made by a group of intoxicated young Melbourne artists in the early years of the last century, (there was a mention of Louis Esson, Australian Playwright and Dreamer of an Australian National Theatre, that arrested my attention early in the play). The play was inspired by a 1906 photograph of Norm and Bill and his brothers in the authors' backyard in St Kilda.

Ishmael, according to Brewer's Dictionary of Myth and Fable, was an outcast:


And he will be a wild man; his hand will be against everyman, and every man's hand against him.  – Genesis XVI, 12.

From the program notes by the writers:


Our Ishmael bohemians are self-proclaimed outsiders with a dismissive regard for 'suburbanites' (the bourgeois) familiar to us today. In the play Norm argues for the superiority of the great male artist over women and everyone else. It is an absolute commitment to 'higher art', a self-defining position for which he will sacrifice everything. As a member of the Ishmael Club, Bill, too, is an elitist - but he is also a serious socialist, a lover of the mob. And he insists that Ruby deserves respect as an artist.

What was best about this play, for me, was to realise that the artist called Norm was a portrait of Norman Lindsay - the artist arguing art for art's sake; that Ruby was the artist Ruby Lind - sister to Norman and wife of Bill; and that Bill was Will Dyson - an internationally famous political artist (cartoonist) working consistently with/for art as a tool for political change, who found solace ( and grief) in the traditions of the 'suburbanites' i.e.marriage and family and thus a double 'rub' to the ideals/prejudices of Norm.

I knew nothing of Will Dyson and so am now the richer for the play's introduction (I have, consequently researched him further). I knew nothing, too, of Ruby Lind - a female artist, a victim of her time's prejudices towards women and talent. And I learned more of Norman Lindsay and his cruel 'zealotry' than I wanted to know (once having played Lindsay, aeons ago, in an ABC television program about J.F. Archibald, the editor of The Bulletin. Yes, he of the Archibald Art Prize and the Hyde Park fountain.)

The production working within the set of the Old Fitz theatre's main show (MEN) is Directed by Suzanne Millar of bAKEHOUSE Theatre Company. The extra setting details seem unnecessary and are mostly unconvincing for the many places the text takes us to. And unfortunately, the Director has permitted her actors to mistake energy and loud noise as the primary means of communication which off-sides some of the audience's ability to enter, empathise, with the goings-on of the authors' intentions.

Richard Hilliar, is best, and his Bill, eventually, in the action of the play, is able to capture our sympathies, abetted by the work of Amy Scott-Smith as Ruby, in a relatively underwritten task. Jasper Garner Gore as Norman is an austere figure wracked by jealousy, wrath and a heightened sense of betrayal underlining his selfish social and personal hypocrisies. The performance tends to be 'heady' and one longs for an insight into a vulnerable 'backstory' and so becomes, exists, in performance, a touch two-dimensionally. Katrina Rautenberg, playing Mrs Maggia, has a chorus like function that mostly eludes her and our belief - more help from the Director may have assisted.

THE ISHMAEL CLUB, less a play than a creative doco in the hands of this company. It was, apparently, nominated for six Green Room Awards in Melbourne. One could not see that kind of Kudos in this production. Ms Millar must bear the differences, it seems. It was the documentary interest that has made this work a gain for me to have seen.
Posted by Editor at 9:18 PM