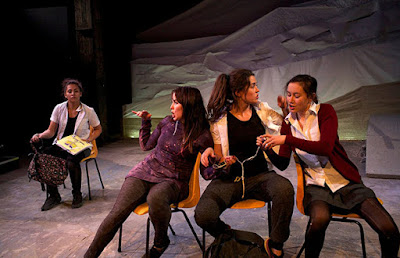 Angela Betzien's play, WAR CRIMES, won the 2012 Kit Denton Fellowship and the Queensland Literary Award for Playwriting. It's staging in Sydney by the Australian Theatre for Young people (ATYP) down at the Hickson Rd Wharf, is in partnership with Pilot Theatre from York Theatre Royal


made possible through the support of the European Union Cultural Fund as part of a project connecting 6 companies and 3 continents - all discussing issues of migration and immigration and its impact on young people in particular.

Alex Evans, a Director, Facilitator and Visual Artist based in London, has worked with an all Australian group of young female actors to bring the work to life.

The play concerns, mostly, five hormonal girls in a country town shifting through that period-in-life from rebellious school girl to young teenager-adulthood, interacting with a small town's cultural and sexual prejudices/politics It examines attitudes to social-economic deprivation, race, sexual differences, violence and nationalism. In this one act 80-minute play all of the young actors play multiple roles, of all ages and both sexes - there is a sense of a rough and tumble urgency in the playing and the material spirals on and on in many scenes with a kind of contemporary short concentration span in length and a language that is of the 'younger' generational type - hip, shorthand and blunt. Some truly terrible things happen to the girls in this play and the consequences are mostly handled as internalised traumas, absorbed by the characters in a very relatively 'such is life' acceptance. There is very little public or social impact of the events explored here. This is an interesting play but whether it covers the above stated brief of the International program is one to ponder.

Lara (Jane Watt) is a stubbornly immature leader of one of the 'townie' girl packs, Ricky (Holly Foster) is the gormless follower of whoever is leading, whilst Jade (Charlotte Hazzard) is metamorphosing into somebody with a dawning sense of the responsibility of conscience and difference, much to the chagrin (and jealousy) of the other group members. For, Jade after being deserted in a dance club by her friends with some army boys out for fun, and taking off to the local beach with them, subsequently sees the local Iraqi refugee girl, Ishtar (Odetta Quinn), and the sexually diverse Jordan (Hannah Cox) for more than the possible victims of spite and anger, that was her usual response to those kind of individuals who were outsiders to her narrow 'white' world.

Ms Cox, creates a character of deep foreboding and nervous trust issues with great care. Ms Hazzard travails the complications of the demanding issues encountered by Jade with a craftsman-like control and delivers a gradual coming-of-age journey for us. The others, too, play well with what are essentially less psychologically complex demands. All, under the behest, of Mr Evans, shift shapes, with a generalised in-yer-face energy that does not always keep the audience sure of where they are in the story or clearly what is happening. The Movement Coach, Tia Jordan, does not find stillness much to highlight the changes of the tone of the work: physical energy is not always enough to sustain interest. Too much plot, too many characters, too much unfocused energy, perhaps? The backdrop and set by Emma Reyes is not remarkable but is assisted much, by the lighting of Alex Berlage. Tom Hogan in his Sound Design keeps it all moving.

ATYP brings us another Australian play, and it is good to see a company of five women carrying the stage, after the presentation of the all men company of A TOWN NAMED WAR BOY last May.
Posted by Editor at 7:41 PM