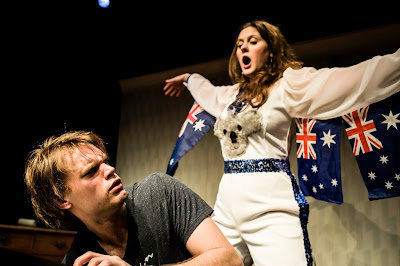 What has happened at the Old Fitz under the management of Red Line Productions is beside producing, presenting, a show at 7.30pm - the Main Event - a series of Late Shows have been curated - variously, 9 - 9.30pm, usually 40-45 minutes in length. This late night showing has attracted and allowed young companies and independent artists to use the space as a place for development of new work of all different genre, (besides the short one act play). BLONDE POISON was the last Main Event, and in the last two weeks, a young group of artists: Philippe Klaus, Nicole Shostak and Griffin Blumer, have written and performed in a piece of musical theatre/cabaret called, FLAME PEAS.

This work has developed from a short sketch created at a drama school - WAAPA. Says the card publicity blurb:


This work has all the promise of an entertaining 'gig'. At the moment one of the performers/writers, Griffin Blumer, is also Directing the work, and really, the show needs an outside eye to take it to a little more rigorous place in its evolving. It is at the moment a 'baggy' collection of characters with a stereo-typical journey that with some astute tightening and enforced skill disciplines, could take off into a surreal stratosphere of comic dimension. Mr Klaus, who plays Danu, gives us a terrific deadpan/depressed Russian 'dude', with an hilarious virtuosity on an electric keyboard - from classical to avant-garde experimentations. Ms Shostak creates the singing chanteuse who travels from competent to amazing, which is not always imbued with a consistent focus of energy effort, while Mr Blumer, plays the talent scout with a broad palette of obviousness. This work has ambition, and while, yet, it has none of the class of say, The Coen Brothers' take on a failed artist: INSIDE LLWEYN LEWIS (2013), with Oscar Issacs, it has potential.

This programming of this Late Night spot at the Old Fitz has flowered with some promise and a couple of the better (provocative) nights out in the theatre, so far this year:  DOLORES; THIS BOY'S IN LOVE; CLEANSED IN BLOOD; THE ISHMAEL CLUB.