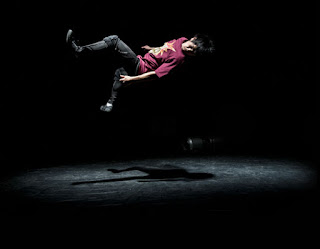 JUMP FIRST ASK LATER - PARKOUR FROM THE STREETS OF FAIRFEILD, Produced and Presented by Powerhouse Youth Theatre (PYT) and Force Majeure, at the Fairfield School of Arts, 19-29 August, 2015, a World Premiere.

Some Fairfield youth have explored and practised as individuals and, latterly, as an ensemble: The Dauntless Movement Company (DMC), to present a wide range of street physical engagements: B-Boying, Parkour, Free running, Hip-hop dancing, Tricking, a variety of martial arts, calisthenics, and acrobatics. In JUMP FIRST ASK LATER, six individuals, all founding members of DMC: Joseph Carbone, Johnny Do, Patrick Uy, Justin Kilic, Natalie Siri and Jimmy James Pham, all but one "born and bred" in Fairfield (the other from Bankstown), tell us of their background stories and of their entrance into this physical world. They talk of it as part of a street/park activity, that gradually cohered into a mutual 24/7 mind and body pre-occupation that they developed as a kind of 'tribal' identification - they did it for fun; it occupied them and kept their minds busy (distracted) in a positive, happy way.

Two years ago the Powerhouse Youth Theatre invited this loose collective into a project that partnered them with one of Australia's leading dance theatre companies: Force Majeure. Two developmental, artistic residencies, one of two weeks, the other of five weeks, led by Byron Perry, has resulted in this astonishing work. Astonishing, many-fold, but particularly because of its theatrical sophistication and the physical skill and bravado (emotional, as well) artistry of all the participants. It is an entirely recommended experience for all ages. Inspiration plus. Exhilarating.

This group of young people have honed their fearless crafts into a breathtaking kind of artistry, by themselves, over years, and now, in collaboration, with Mr Perry at Fairfield Youth Theatre, have produced a dance work, reminiscent in form, of some of the work of the great DV8 company: TO BE STRAIGHT WITH YOU (2008); CAN WE TALK ABOUT THIS (2011). Says Choreographer Byron Perry in his Director's Notes:


This work is an onstage documentary about a group of six individuals from Fairfield in Western Sydney, and their shared love of movement. ... It is as much a story about urban movement practises and the freeing and the unifying power of movement as it is an exploration of the lives of the people involved. ... it is a reminder of how important our connection to place and to each other really are.

The commitment to their street-inspired 'culture', the physical movement forms, and the development and disciplines of their skills is evident in the intensity and expertise of their performances. JUMP FIRST ASK LATER, begins with the group introducing to us a round of exercises as a kind of 'warm-up', and then, unobtrusively, segues into taking us on a journey into their worlds, both the public art form they are inventing, and the 'private' contextual motivations they individually have, to persist with it. Each of the artists get to show their 'best' tricks, and each subsume, integrate, their 'tricks' and skills into a series of ensemble pieces that are breathtaking to watch.

My favourite was the comic physical construct of a computer game by the 'gang', and, here, the subtle but decisive skills of the AV Design of Sean Bacon, combined with the witty and beautifully judged contribution of the Sound Design of Luke Smiles, creates an unforgettable theatrical memory. It may have been, as well, that the floor of the Fairfield School of Arts, bounces and springs back at us, as the artists swing on the pseudo monkey-bar construct at the back of the shallow stage, onto the wooden blocks, to land in full flight in front of us, so that the audience's seats bounce back in 'a cause and affect' conversation with them - a thrilling visceral inter-active buzz in our own bodies that connects us in/to the action, and may create the delusion, as it did, momentarily, often, that I, too, was doing Parkour (I wish), with them.

This is an amazing work. This is not just a good community project outcome. This is a terrific piece and time in the theatre. Get yourself out there to Fairfield. Take yourselves, your children (of all ages) and be made very, very happy.

This is a DON'T MISS.

P.S. The theatre, The Fairfield School of Arts, is just around the corner from the Fairfield Railway Station, and there are terrific Iraqi Restaurants,  and others, to eat, or have a coffee and cake at, before the performance. The show is just sixty minutes long. One wished it was longer. But then, of course, I was only watching, not expending my physical energies in these remarkable acts of love in the pursuit of FUN.
Posted by Editor at 4:19 PM