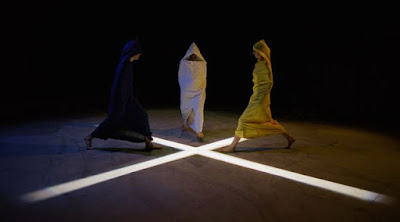 The program is about 60 minutes in length and the material is, mostly, a showing of a late development in Beckett's oeuvre, that had moved further and further into a minimalist aesthetic. Away from the word verbosity of the novels - that he wrote - to a compactness of expression that did eschew not only words-text, but, ultimately, movement itself. Just an image! Stripped to such a minimalist offer, reduced form, of authorial vision, any artist, attempting to present these works, needs a vivd and disciplined intellectual interrogation, with the added service of a consummate control of the skills needed to find an efficient and simple vocal and physical expression of the 'plays', to reveal the deep inner origin of the intentions of the author. To have a successful simplicity in any art form requires a craft control of much finesse.

The most successful element of this exercise by Glorious Thing Theatre Co is the Design by Victor Kalka - a, seemingly, vast white-grey stained bleakness of floor space with a crumbling platform of concrete to one side. The properties employed, chosen, are purposeful and apt in these circumstances. The costumes, mostly, an elegant sufficiency (though the four coloured 'pillow-slip-like condoms' that were worn by the company in the non-verbal, QUAD, required, possibly, more budget to achieve their intention). The Lighting Design, by Alex Torney, had some pleasing aesthetic achievements. Too, the Sound Design by Thomas Brennan was, mostly, a great relief, to have in the experience.

Physically, these actors have begun to utilise the methods and theories of the Tadashi Suzuki Method of Actor Training, (Toga, Toyama, Japan), to explore some of this material. That they are beginners of this method, is evident. The movement we saw onstage is approximate in its discipline delivery and lacks the elegance of comport of 'style' to persuade an audience to think beyond the oddness of it all - which became, necessarily, for some, a rather 'boring' experience and a meaningless use of time. Too, the text in the works is sparse, and at one stage, just disembodied voices. The words, the sounds of those words, become the tool with which the audience must 'read' the work - their ears must become eyes, as well. To be challenged with such succinctness requires, then, voices that have, necessarily, more skill access than the ability to deliver ordinary conversation, information. There is, I believe, a need to be able to present the complexity of the profound philosophic observation of the few words that Beckett gives, with an instrument capable of real, resonant force. None of these artists have the requisite basic skills, body or voice, to create the profundity that these works need to make positive impact.

To witness the aspiration of this company and not be 'bored' is to, perhaps, admire them for their ambition - I was never 'bored'. But METAFOUR at the Pact Theatre, is merely an aspiration created by an inspiration engendered by one of the most formidable theatre makers of the last century. One of my personal wishes when I go to the theatre is see work that "Fails Gloriously" - this is what I witnessed on my night at the Pact Theatre with METAFOUR: a glorious failure. There is no doubt that this company has the chutzpa of ambition which with better skills will allow them to achieve their aspirations. My faith, some might say blind faith, in the serious integrity of Glorious Thing Theatre Co, was illustrated, for me, in their sincere taking of their curtain call  - it had a kind of grace and proudful modesty.
Posted by Editor at 8:50 PM