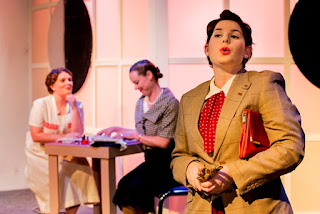 THE WOMEN, by Clare Boothe Luce is a tart comic satire written in 1936. Its famous gimmick is that only women feature in the casting - in the original play some 130 roles - and is a play concerned with the indulged class of the Manhattan rich and their servants, in their homes/apartments/beauty parlours, and inevitably, in the capital city for divorce: Reno.

The film, made in1939, Directed by George Cukor, is a comic classic stuffed with great stars of the period - Norma Shearer, Joan Crawford, Rosalind Russell, Paulette Goddard, Joan Fontaine etc. - and is, for some, a capital 'C' Camp-Classic - it has a 8.0/10 rating for great films on the net  (forget the recent horrible, 2008, re-make).

In the foyer, before the performance, I supposed the reason to do it, today, is to give the women in this city the opportunity to hold the stage without a man to be seen - and, so, at the New Theatre some 18 women get to strut their stuff.  The risks in curating the work is in the number of period settings, and costume demands; finding  the skills for the famous old-Broadway tradition of the ensemble comic hijink fluidities of style, that are needed to keep the work afloat for today's audience; and with its demand for a large character driven company of actors that can be wielded into performances that can make a delicate bravura judgement  between truth of character and satirical caricature, comic gestures and sentimental melodrama.

This play represents a tradition of playing that certainly gets very little exercise in this city. Any company, having the courage, the guts, the balls (!) to attempt THE WOMEN, by Ms Luce, is certainly setting itself a most wonderful, terrifying risk of failing.

The great surprise, then, is that the Director, Deborah Jones, at the New Theatre, has achieved a considerable success with this production. There is a lightness of assured touch from all the artists and the production flies by in a swift two hour forty minutes (including interval). Within the boundaries of the budgets of this theatre organisation, there is some good work: Set Designer, John Cervenka, uses a central revolve platform to shift the scenic action with taste and speed (one wished the Sound Design was more accurate to mood and, dare I say, lifted in volume, to segue the changes with more energy) - the overall look, is a low key Arc Deco decoration, of subtle colour, with minimal furniture and properties. The costumes which are, necessarily, many and varied, have been sourced and made with some elegant solution by the Costume Coordinator, Alexandra Plim. Congratulations. The actors manage to wear the costumed 'looks' and 'make-up' with some convincing, and when needs be, glamorous flair.

It would be invidious of me to focus too much on individual performance, for the ensemble  of actors, its combination and coordination, is the principal victory and pleasure of the night - the TEAM (the backstage heroes, as well). The principal players, Helen Stuart (Mary Haines), Jess Loudon (Sylvia Fowler), Emma Louise (Edith Potter) - despite that horrid, horrid wig! - and Eleanor Ryan (Crystal Allen) acquit themselves well. Though, too, could draw attention to Joy Miller, Vola Vandere and young Jade Potts, and especially, Sandy Velini who has a series of wickedly observed and comically astute creations.

This production shows off an almost lost genius of a great period of American theatre writing, and comic acting disciplines - ensemble and individual. Think of the great Kaufmann and Hart works: ONCE IN A LIFETIME (1930); YOU CAN'T TAKE IT WITH YOU (1936); THE MAN WHO CAME TO DINNER (1939) - we haven't seen them in years - or the great one: THE FRONT PAGE (1928), by Ben Hecht and Charles MacArthur.  Sydney saw THE FRONT PAGE years ago, in the 1972 National Theatre touring production, at the now destroyed Her Majesty's Theatre, near Central Railway (in an 'Old' NIDA student production, as well, since then). The last production of this scale and comic flair, Sydney has seen, professionally, was, I suppose, another National Theatre touring production: ONE MAN, TWO GUVNORS (2011), by Richard Bean, an adaptation of Goldoni's 1743 masterpiece, A SERVANT OF TWO MASTERS. The scale of design and the size of casting (see my blog on LOVE AND INFORMATION) does seem to prohibit the artistic vision of our major company,  the Sydney Theatre Company (STC), when one looks back over its recent track record (look at blog of CYRANO DE BERGERAC). We depend in Sydney, then, on the daring Co-op and Amateur theatre companies to produce this high scale work from the past, that are an important and entertaining part of our theatre going heritage, that is otherwise 'buried' and avoided by our major theatre company. Our contemporary writers discouraged to write in that scale - even to dream at that scale - comic or dramatic, it seems.

THE WOMEN, at the New Theatre, is then an unexpected production treat - flawed, but not diminished in its gifts for us. To see the satirical comedy/sexual politics of the period (still relevant today), along with the opportunity for the women of our profession to have wonderful roles to solve, are two good reasons for this active Socialist Theatre to curate the work. I guess. Role Equality for Women - Yes - just trying to placate the Ghosts of the Past that founded this important theatre space.

Surrender and have fun. It can only get better with an appreciative audience.
To do this play well is no small feat.  Go.
Posted by Editor at 7:43 PM