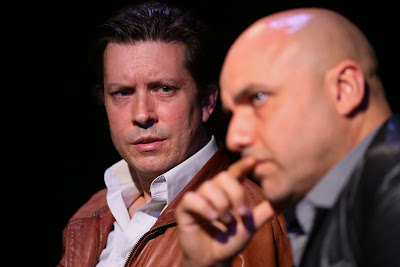 A STEADY RAIN (2007), by Keith Huff, is a cop show, a vivid law and order episode of a grimy underbelly intensity, looking at two Chicago men-in-blue, two schoolboy, neighbourhood friends, partnered to patrol their cities' streets for the protection of their citizenry. It examines two men, two bonded 'bros', under the relentless pressure of the 'job' they do, who over time have shifted the goal posts of their integrity, both in their public and private life so far for so long that, inevitably, something has to give.

This production, by Adam Cook, is gripping in its control of the story telling, and it uses the gifts of Sound Designer, Jed Silver, to create, sonically, the world of the Chicago locale, subtly, introducing a vital third 'character' for the developing  'atmospherics' of the scenario of the experience. Too, the Production Design, by Ross Graham, keeps the locations varied with his Lighting choices and creates the illusion that there is something more than two separate monologues with an occasional present moment dialogue interaction, going on.

The actors give very good, but obvious, performances. Justin Cotta, as Denny, the off-the-rails/bad cop strikes too quickly a heightened macho-energy that becomes a little too one state for too long. That Denny is dangerous and losing control is telegraphed very early, so that we get Denny too easily, and can anticipate/predict his disastrous plummet into the abyss. As a result the writing appears to be one-dimensional and plot-wise dull, despite the language skill. It is the stamina of Mr Cotta's ability to sustain his choices that becomes the pre-occupation of our appreciation/amazement of what we are seeing. Construction of character with an emotional discipline with a detailed restraint to the imaginative and intuitive response to the story development could produce more interesting work than the button-popping stresses we witnessed. The Marlon Brando question that that actor posed himself often: "What else can I do with this moment?" is what I wanted to ask Mr Cotta while I was watching. There were no surprises in his response to the scenario of Denny. Nick Barkla, begins a little under energised vocally but builds to a heartfelt angst at the luck that Joey, in these circumstances, is rewarded with. The turmoil of the good cop struggling with his attraction to his best mate's wife, and to the frustrations of his 'bully' partner/life-long friend are crafted well, even if the inner and outer physical destruction of Joey with an alcoholic addiction and recovery is hardly signalled for us - the fresh-faced health of the actor is what dominated one's impression.

A STEADY RAIN, is what, typically, almost dependably, one has come to expect to see at the Old Fitz Theatre under the Red Line Production curation. The macho, high testosterone bad behaviour of men, written and performed very well. More of the usual. I remarked, recently, that the presentation of BLONDE POISON was a good move for the demographic of the company, both for the representation of the female artist (and dare I say older artist), but also for the audience. We shall see how it pans out for the rest of this year and with their plans for the next year.

A STEADY RAIN, the typical reliable macho opportunity at the Old Fitz, well done, again, by this team of artists.

N.B. There is no information in the program about the writer!
Posted by Editor at 10:53 PM