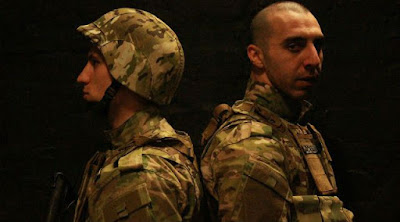 BRITANNIA RULES THE WAVES by Gareth Farr was premiered at the Royal Exchange in Manchester in 2014, and is having its Australian premier with this production.

A 90 minute 'story-theatre' exercise told directly to the audience, with some acted interludes with other characters, by a young Blackpool lad, Carl Jackson (Vincent Adriano), who to escape the boredom, "the shite" of his home town, follows up the invitation of a recruiting officer into the armed forces to see the world.  "We fight. We Win. We carry on." becomes his mantra as he is sent to Africa, Germany and finally to Afghanistan where he learns of "The Thunder in his Blood." He is witness to much horror of war and kills. He experiences amongst his soldier companions much grief of war. He returns to a black pool in Blackpool, aching with post traumatic stress symptoms and attempts to cope with the boredom, the 'shit' of that place once again.

This is a full throttle play of some quality in the writing, and with this production Directed by Deborah Mulhall acquits it fairly well. The staging and the managing of the other actors: Nick Rowe, Patrick Cullen, Alan Faulkner and Jane Angharad, is very secure and advantageous to the tensions to the issues of the text. The burden of the play's success falls, mostly, onto the shoulders and skill of Mr Adriano. The passionate commitment of this Mr Adriano is powerful, and I believe, with just a little more vocal discipline and emotional restraint in the climatic battle tellings, it could have been even more effective - just a trifle mis-judged in its emotional demonstration, showing-off.

Although, I have become impatient, exhausted, of the written-form of contemporary 'story-theatre' play telling used in this work, I was pleased and surprised by the performance. Glad to have seen it.
Posted by Editor at 10:37 PM