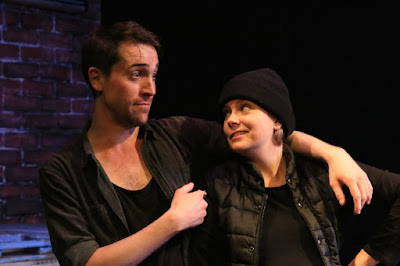 Red Line and the Old Fitz Theatre has instigated a season of late night shows, after the main event, over the past months. We have seen a variety of work, from the well honed work of established writers in the One Act play tradition: DOLORES, by Edward Allen Baker; BULL, by Mike Bartlett; through to new work from monologists, to new multi-cast plays. INFINITY TASTER, by Rowan Davie, is a new Australian one act play, investigating how its 'wheels' will work now that it is off the page and embodied on the stage with strangers watching/participating..

The actors in this play: Rowan Davie, Eloise Snape, David Soncin, Stacey Duckworth, Jack Stacey-Gill and the Director, Janine Watson, were all part of a touring company for Bell Shakespeare taking the Bard to the country. In between the stresses and strains of doing that, Mr Davie wrote a play for them all and here it is. One can hear the banter of low comedy with the spirit of one-up-manship that may have occurred in the motel/hotel rooms after the showings, and in the Kia Carnival, that careered them from gig to gig, as Mr Davie explored and extrapolated his opus with them.

INFINITY TASTER is a satirical take of an actor/writer been caught up in the surreal world of the movie business: an agent, a studio and all the striving omnes in that kind of 'space' with all their desperate egos and needs, trying to make a war movie for the world to see. It is a fairly absurd but familiar situation with similarly familiar characters. Paulie, the actor/writer of this scenario finds himself caught up in a No Exit world, trapped with a mounting sense of the claustrophobia of limited creative options, mediated over by mediocrities. The text is full of over-the-top writing with jokes as cutting-edge trendy as can be just bearable, and as wafer-thin in character as necessary to keep it moving. The production felt to be just a little undercooked, but, on the other hand, the play is getting a fair workout in the space, and I'm sure much is being learnt from its 'airing' in front of an audience - part of the process benefit of a Late Night spot.

A drink (perhaps) in one hand and a  benevolent appreciation of juvenile comedy will give you some satisfaction with INFINITY TASTER. It has a very short run. What else are you doing out at 9.30pm? The Old Fitz is a very friendly pub.
Posted by Editor at 9:45 PM