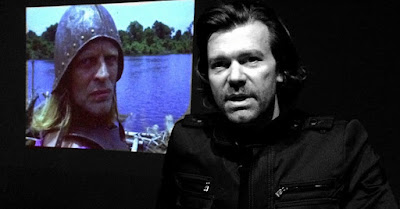 KINSKI AND I, is a theatre work Devised and performed by CJ Johnson, Directed by Michael Pigott. Mr Johnson is a Film Critic and reveals, here, with this work, a Fan-tastic admiration for the actor Klaus Kinski - 'one of the great actors of the cinema', he says  - particularly in the films he made with Werner Herzog: AGUIRRE,THE WRATH OF GOD (1972), NOSFERATU (1979), WOYZEK (1979), FITZCARRALDO (1982) and COBRA VERDE (1983).

The performance begins with a reading in the 'possessive' voice of Klaus Kinski, in an approximate  German/Polish dialect from Mr Johnson, concerning the making of AGUIRRE, and, particularly, focuses on the incompetencies of Werner Herzog, his Director. It is startling for its frankness and viciousness and one intuits that Mr Kinski may have been a man with the mind and self-belief of a completely self-obssesed narcissist - it has, some amusing sides, especially when you remember he went on to make four more films with Mr Herzog, and is remembered, mostly, because of those collaborations - no matter Mr Herzog's ineptness (Herzog has made a documentary on his working relationship with Mr Kinski: MY BEST FRIEND - 1999).

Mr Johnson, then came from behind his lap-toped plinth, and explained amiably, and with the attraction of a febrile enthusiast, to us, of his introduction to the world of cinema at the now lost (though the building still stands), Valhalla Cinema, in Glebe Point Rd, Glebe, and of his abiding, entranced 'romance' for Klaus Kinski. We learn that an autobiography called KINSKI UNCUT, translated by Joachim Neugroschel, was published in 1996, after the banning and pulping of the original called, ALL I NEED IS LOVE, in 1988, because of threatened law suits - one filed by one of his daughters: Nastassja Kinski. Mr Johnson shows us that he has both books and that the pulped book is the major source of the evenings entertainment.

What we hear throughout this 70 minute performance is a self-exploitation of the life of the man, Klaus Kinski, living his life 'on-the-edge', lived in manic excesses of many edges, possessed with fierce persona, both in his craft/art and personal life. The sexcapades revealed in this performance are highly depraved, as much because of the voluminous numbers of encounters he claims and describes, as in the taboos he declaims to have broken, in their self-celebrated details and relentlessly pornographic, salaciousness. One is made to agree, wholeheartedly, with the quote from Mr Kinski, in the publicity bumf: "A person might think that I only lie around in bed and pass my time f**king. That's not true ... I can't just f**ck, I have to earn money too."  He made 130 films - not many as well known as the Herzog collaborations.  So, indeed, sex to serve an addiction, and movie-making for money to be able to do it - his exclusive pre-occupations, it seems, from the  evidence given us by Johnson in his KINSKI AND I, lecture.

Mr Pigott, has incorporated some glimpses of the films (Laura Turner, videoscape) on a large white wall/screen. The work is full of verbal monstrosities and one wonders just what is the point of it all, besides its innate vulgarity of the indulgence of the ego on display. Mr Johnson, does little more than organise the quotations that he reads (well), and makes/gives no perspective or conclusions as to the raison d'etre of creating this show at all, except, it seems, to underline his whole wonder of the man Klaus Kinski.

Nastassja Kinski in an interview in 2015 asked what she would say to her father if she had the chance: "I would do anything to put him behind bars. I am glad he is no longer alive." A sentiment I carried home after leaving 5 Eliza Street, Newtown. Ironically, it was raining when I left the theatre, and I felt as if I was, symbolically, being cleansed.

From the media publicity: THIS IS NOT A SHOW FOR THE TIMID, AND YOU HAVE BEEN WARNED. Just who it is aimed at, and why, is the question you might debate after the experience, if you elect to go.
Why?
Why?
I guess because Mr Kinski  could and Mr Johnson wants and can.
Posted by Editor at 9:53 PM