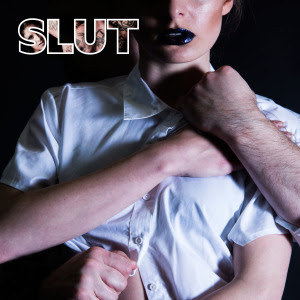 It is in a 35 minute 'story-theatre' form and is told, mostly directly to us, by a group of young girls from primary school through to adolescence and young adulthood, as they tell us of the life journey of one of their peers, Lolita, who sexually matures very early, and becomes the repository of much victimisation, from all areas of her world: the men about her, and more crucially her peers. Whether out of deliberate surprise, envy, jealousy, or cruelty,  Lolita is regarded by all as a SLUT.

The writing is gritty and poetic, and is unwavering in its mature view of the hypocrisies of ourselves and our tribal merciless need to have to have a target to condemn and ruin - it does make one feel superior to have one, doesn't it? Unfortunately, none of the performers in this production or the Director, Nartarsha Wrested, have any of the skills or experience to do justice to this very important work. Like Lachlan Philpott's TRUCK STOP (2012), Ms Cornelius deals in SLUT, with social issues and conditionings with unflinching accuracy with no apology. Ms Cornelius is a Melbourne writer that we rarely see in Sydney. Her plays usually are uncompromising in their subject matter and issues - may be , too tough, for the precious sensibilities of Sydney audiences? I ponder. The last time we saw some of her work was in 2009: THE CALL.

I was most eager to see this play by this much admired writer. Sad that the production was not up to it in any capacity. One had to look beyond the production to capture the truth of Ms Cornelius' writer's courage and skill.
Posted by Editor at 10:42 PM