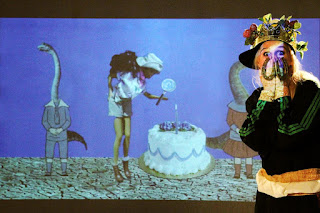 ATYP have welcomed home an alumni, Yve Blake, who has had some success with her one woman/self devised project, overseas: THEN.

From the program: A WORD FROM YVE.


Way back in September 2013 I had an idea. What would happen if I tried to co-write a whole show with strangers? What would happen if I built a website where anyone could send me a story? [...] I built WhoWereWe.com and the stories came flooding in. Enter Alec Groves, a young composer who encouraging me to use cutlery and flushing toilets as percussion. Next, in steps Naomi Kuyck-Cohen and Alice Cousins - two fresh young designers who combed my lyrics for images and conjured costumes out of a shoe-string budget. Noel Nussabaum and Joel Enfield added (video) projections [the best element of the show], and finally I roped in Georgia Symons and Phil Jameson to help me figure out what order to put everything in. That wasn't easy, because we had over 1,000 stories to choose from.

All of the above succeeds in a fairly proficient technically well-organised cabaret show, with a computer laptop being Ms Blake's partner in performance, as she cues quotes from the many people who have sent short contributions to her principle question: Who were we, then? They appear on a screen for her to read for/to us in three (or, maybe, four) different voices, while interspersing  the mere verbal, with several compilation 'lyrics' for songs, from her 'stranger's' inputs, accompanied by adequate movement, and occasional costume changes.

The precision of the production is admirable, but Ms Blake's skills are only kind of OK because they are delivered by a cutesy Cyndi Lauper-esque persona, where girls just want to have fun, circa 1983. For the trouble with THEN is the painfully naive content that Ms Blake has curated from the 'flooding-in thousands' on her website, and has decided that that is what we would love, and appreciate. It is as if Ms Blake is playing with who we were, might have been, when our Barbie Doll, with her 'blonde' hair, was at the centre of our creative games.

In summary, THEN, is sweet, saccharine, and awfully cute, with a soupçon of mawkish sentimentality, to cover other bases of a tick-box content formula. It can be a very long hour in the theatre. It is not for all of us, I'm afraid. Clearly, the ATYP artistic family believes in the show and have given it the time and space for others to have fun with Yve, on her return to these shores from the UK. Some of us did. Some of us didn't. There were red frogs and snakes of all colours as well as 'fairy' bread to have after the show in the foyer! Along, thankfully for some, some alcohol.
Posted by Editor at 8:44 PM