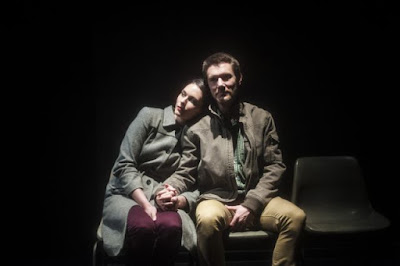 DEAD CENTRE by Tom Holloway, and SEA WALL, by Simon Stephens, two monologues, are presented as a Co-Production from the Red Stitch Actors Theatre, Melbourne, and Red Line Productions, at the Old Fitz Theatre. SEA WALL was written by contemporary British playwright, Simon Stephens (ON THE SHORE OF THE WIDE WORLD, PUNK ROCK), in 2008. A monologue from a Man, a father (Ben Prendergast), telling of the loss of a child and the aftermath, toll, on he and his family. Red Stitch commissioned Australian writer, Tom Holloway (BEYOND THE NECK, AND NO MORE SHALL WE PART), to write a monologue as an accompanying play. With the permission of Mr Stephens - the authors are friends - Mr Holloway wrote DEAD CENTRE (2015), a piece concerning the breakdown of an English woman (Rosie Lockhart), in Australia.

DEAD CENTRE is told first, and the Woman tells us of her sudden decision to flee London to travel to Australia and of her gradual descent into grief in the dead centre of Australia, Uluru. We are drip-fed information about the circumstances of the trajectory of the woman's life, experience, and only at the end of the SEA WALL monologue, that follows, do we understand that the Woman and Man were the parents of the lost child. Both traumatised out of reason and the possibility of a continued relationship. (A statistical possibility, sadly.)

The two actors perform, what the Red Stitch prefer to call monodramas, with a disarming intimacy, directly to the audience - they take, collectively, just an hour to give. The conceit of the writing have the characters acknowledge our presence and we are beguiled into a relationship that can be costly to our empathy. My night, with them, became an extremely moving one.

Red Stitch present the work within a very sophisticated aesthetic - a mesh-screen which captures projected images of the sea and shore (Digital Designer, Katie Cavanagh) and also allows us to see through it, to the presence of the actors, when they are not engaged with us at the front of the stage - the Set and Lighting Design is by Matthew Adey, who, also, was in charge of those elements in GROUNDED, another superlative work presented by Red Stitch, earlier this year. There, too, is an atmospheric Composition and Sound Design, by Ian Moorhead. All sensitively Directed, by Julian Meyrick.

My bug-bear with much of my theatre experiences in Sydney, for some time, has been the seeming avoidance of most of our plays, and especially, productions of them, to honestly deal with social, cultural and political confrontations, in full-on human depth, that rather, instead, elect to edit them out, or soften them, or worse 'piss-take' them - there are exceptions, of course, to prove my 'rule': e.g. THE BLEEDING TREE- so it was with welcoming pleasure that I embraced the tone of this production. Two of the most satisfying nights in my theatre going this year have been presented by this Melbourne company, despite, the dreaded writing formula of the monologue, story-telling go-to preference of so many of our contemporary writers.

DEAD CENTRE / SEA WALL has a stellar theatrical impact given by Ms Lockhart and Mr Prendergast, and as I encouraged you to attend GROUNDED, so do I, this production at the Old Fitz.

Go, and have a rare shared evening as a respected 'adult community' in the theatre.
Posted by Editor at 7:10 PM