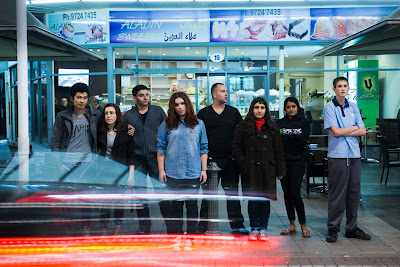 TEAM AUSTRALIA: STORIES FROM FAIRFIELD is the Powerhouse Youth Theatre (PYT) Ensemble showcase for 2015. It seems that this core group of six performers: Luke Cignarella, Monica Kumar, Mahdi Mohammadi, David Robertts, Barbara Schefer, and Amanda Sullo, young artists from South West Sydney, have met for two hours each Monday, over the past year or so, to research and train with professional arts practitioners. Says Karen Therese in her Facilitators Notes to the program: "This year the ensemble skills program focused on writing and developing seed ideas for each member's individual works." The writing, essentially monologues using their life experiences, have been mashed into an hour long 'showcase' by Kym Vercoe, Sean Bacon and Ms Therese.

The play space looks good and the performance begins with some sass, representing the general misapprehension of who these young people are mistaken for when they tell others that they are from South West Sydney. It is, they say, thought, that they are 'boat people' when, in fact, all of them, are Australians, legal Australians, diverse though their backgrounds may be! What follows, in the rest of the performance, however, is a paucity of arresting, interesting content. I am not saying that it doesn't have 'heart' - oh, no there is lots of that - it just doesn't have much 'head' or nous: social, cultural or political - that takes us beyond the patronising appreciation for the participants' 'charm' and 'courage'.

Using the THE WIZARD OF OZ famous tune, with choreography: SOMEWHERE OVER THE RAINBOW, as a springboard and recurring image for the Stories to follow, with references to a musical theatre repertoire as old fashioned as WICKED, CHICAGO and WEST SIDE STORY, scattered through the evening, was a bizarre framing tool, for these stories, or, was that another example of misapprehension, by me, of who these young South West artists were/are? That Dorothy and her companions are icons to these young people's lives, too? Hmm, we're not so different! Wow!
Maybe two hours a week is not enough, even over a year, for the young writers to invest some rigour and deep background revelations that would gain our attention beyond comfortable approval - like, you know, that The Wizard is part of all of our lives! Even now, and still!

Past work in this genre by PYT - i.e. text based work - THE VIOLENCE PROJECT and IN THIS FAIRFIELD, has not been so nakedly dependent on the personal writers'/actors' lives to carry the performance, and to show the 'extraordinary cultural diversity' of this ensemble. The contextual themes and the framing tools of both those other pieces held us in a kind of thrall that resonated with more meaning than this work found necessary to contemplate - the content of TEAM AUSTRALIA and its framing felt  flimsy/lightweight in the light of the PYT performance history so far, and of its mission statements for these "diverse, intelligent, sassy and endlessly creative" young people - and their facilitators.

Earlier this year, PYT, in collaboration with Force Majeure produced a positively stunning work: JUMP FIRST, ASK LATER. The young PYT artists who participated were all from the South West, and are self-trained physical practitioners in a variety of physical expressions that were brilliantly harnessed by the Force Majeure company. The skills of the young performers were, obviously, passionately honed - on a 24/7 basis, they say. They even have formed their own Company: The Dauntless Movement Company [DMC] - and within the structure imposed by Force Majeure were liberated to amazing affect for the audience. It is apparent, on the showing of TEAM AUSTRALIA, that none of these aspirant artists have practised with a similar due diligence in any of the skills demanded of their form: voice, speech and movement skills - simply trusting to their charming selves to capture us for an hour. It is, sad to say, not enough. Is it that everybody believes that they can be an actor/storyteller, for an audience? It's not true, it needs practised skills. The DMC have skills, let us create a similar regime for these young South West Artists.

TEAM AUSTRALIA: STORIES FROM FAIRFIELD, is a let down for us fans and admirers of the Powerhouse Youth Theatre. This work is only for family and friends . On the other hand, keep an eye out for JUMP FIRST, ASK LATER, at the Sydney Opera house next year - it's a knockout.
Posted by Editor at 7:01 PM