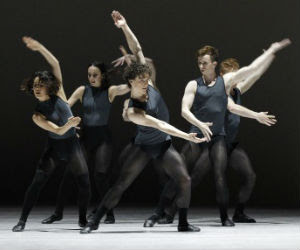 20 : 21 is a Triple Bill program from the Australian Ballet of three modern works, from the 20th century into the 21st century (20 : 21, get it? I hadn't for a time!). The first: SYMPHONY IN THREE MOVEMENTS, Choreographed by George Balanchine, Music by Igor Stravinsky, re-created by Eve Lawson. The second, a brand new work, FILIGREE AND SHADOW, Choreographed by Australian, Tim Harbour, Music by 48Nord (Ulrich Muller and Siegfried Rossert). The third IN THE UPPER ROOM, Choreographed by Twyla Tharp, Music by Philip Glass, Staged by Shelley Washington.

SYMPHONY IN THREE MOVEMENTS is a new work for the Australian Ballet, featuring music by Igor Stravinsky, and was first created by George Balanchine in 1972, the year after the composer's death, in honour of their friendship which began in 1925 through an introduction arranged by the famous impresario of the Ballets Russes, Sergei Diaghilev (what a story/dance history in those three names!) "Exiled" to the United States, as a result of European politics, they developed further work there. They both held an unconventional view of music and dance, believing that they should 'tussle' with each other. Stravinsky felt that the dance should do more than decorate the music, whilst Balanchine was adamant that the choreography should neither overwhelm nor hide the score. SYMPHONY IN THREE MOVEMENTS is distinctly not "about" anything. In fact, both men described ballet unromantically as the shaping of time and space.

This is one of Balanchine's "leotard" ballets, and requires no scenic distractions from the dance (though beautifully lit - Original Lighting, Ronald Bates. Reproduced by Graham Silver). The curtain rises on a diagonal line of the female corps in white leotards. This performance did not begin propitiously as the dancers were, mostly, disparate in the timing of the 'choral' movement of its first episode. However, the company moved swiftly into a complex set of patterns and groupings whisking away the faulty beginning. The dance is an unleashed propelling of energy that has the intricate precision of the innards of a swiss watch.


There are references to the 1940's musical movies of Busby Berkeley and Esther Williams, embodied by Balanchine's opening patterns of sexy, leggy pony-tailed women; to the jazz era, which Balanchine evokes through syncopation and brisk, athletic steps; to jitterbug and swing; and to the Asian culture that so captivated Stravinsky in the 1940's. [1]

The duet between Ako Kondo and Andrew Killian - the "Asian" section - was beautifully danced. While there is a zest to the performance there is also a sense of the choreographic period from which it was created, what today we could call, 'a quaintness of gesture', that signals an observation of a culture from a fairly naive viewpoint. This was the first time that I had ever seen this work and was tremendously pleased. The Australian Opera and Ballet Orchestra was conducted by a guest, Simon Thew - the two subsequent works used recorded scores.

FILIGREE AND SHADOWS, is a brand new work commissioned by the Australian Ballet, from Tim Harbour, for 14 dancers. Mr Harbour developed the armoury of movement - some 70 phrases - alone in a room without music, building from words and a sense of fear - perhaps, a fear of failure - that informed his choices and his tempo changes. The dancers, working with Mr Harbour, were inspired with a series of images to layer onto the movements, achieving release through confronting fear, giving the movements an integrity. Creating without the music the movements became primary, so that the music, rather than the dictator of the choreography, became a colleague. The music score was introduced late in the process.

The filigree (of the title) sits in the upper body, and the articulation you can get from using your wrists, fingers, elbows and shoulders and frames around the core form of the torso and the legs. The concept that Set Designer Kelvin Ho worked from was an image of a cyclonic cone, and has created a white box about a high curved wall centre stage on which Lighting Designer, Benjamin Cisterne, has developed the shadows (of the title) and spaces of moving patterns.

The music comes from the German duo 48Nord: Ulrich Muller and Siegfried Rossert. This commissioned electro-acoustic score comes from a 40 year creative relationship, and they living and working in Germany have certain inescapable influences: Kraftwerk, Tangerine Dream, Karlheinz Stockhausen, John Cage, David Tudor, the French school of Musique Concrete, Edgar Varese and not least Josef Anton Riedl. This 21st century score tests the boundaries of composed and improvised music and could be a challenging experience aurally for some. The 'noise' of it and its volume results in a visceral body experience in our seats in the theatre, and when combined with the choreographic visualising, brilliantly danced by the company, it escalated the work, for me, into a thoroughly, thrilling, transporting experience. The music is described by Mr Harbour " as bombastic, at times histrionic, extremely nuanced - and ultimately liberating." It is all of that and with the passionate commitment of the dancers to the staged choreography, and the Lighting, the Australian Ballet have been propelled into the 21st Century with a thrusting florid drama exploding into a growing catharsis of aggression - a signal of our new century's history so far, and its surrounding energies. This is an impressive and startling great work. All of the elements integrated for BEST effect. A sensational experience: sitting in the theatre watching and listening to this work after the recent 13th November, Paris attacks, one could feel life and art resonating in one's senses - terribly, wondrously. The birth of a contemporary classic?

IN THE UPPER ROOM was World Premiered in 1986. It was choreographed by Twyla Tharp and used a commissioned score by Philip Glass. The matching of these talents has resulted in one of the most exultant modern dance experiences one can have. I have seen this work many times, from many different companies, and could see it many more times (In fact I could have sat there and experienced it again, then and there). The choreography fuses a broad spectrum of movement into one vigorous vocabulary. Boxing, tap dance, yoga, ballet and full-out sprinting, forwards and backwards, are intertwined. The dancers must push through the difficult steps, intricate timing and aerobic demands of the choreography without much relief (or rest). The work is a physically demanding one of relentless action and Ms Tharp built the work from life with the dancers - as they had in rehearsal - shedding layers of costume as part of the visual journey of the physical effort of doing the dance. Beginning in black and white stripped "pyjama"-like clothing the dancers gradually strip down, in pleasing permutations, to primary red coloured leotards and shoes, Designed with an elegant eye of some sophistication and beauty by Norma Kamali. The Lighting Design by Jennifer Tipton (reproduced by Graham Silver) compliments the action and highlights the increasing haze effect through which the dancers move. The score from Philip Glass has now become one of the GREAT music pieces and engenders, still, a contemporary thrill alongside a familiar knowing that creates the comfort of what now, nearly 40 years later, is also a classic. The company has been prepared by Shelley Washington, one of the original dancers of the work. The Australian Ballet does the work proud. It is exhilarating. Ms Tharp, celebrating the entrance into the fifth decade of her career has two new dance works: PRELUDES AND FUGUES (music by Bach) and YOWSIE (music by Jelly Roll Morton) about to be seen. "I often say if an audience doesn't leave our performances feeling literally better, lighter, freer, we've somehow not succeeded here." Ms Tharp should know: no-one in the Joan Sutherland Theatre left other than in the manner she hoped: feeling better, lighter freer.

This contemporary dance trilogy, 20 : 21, presented by the Australian Ballet was this company at its best - in fact I had not seen them dancing so well, with such a stimulating program, for such a long time.

P.S. I was a guest of a friend and his family, and am truly grateful.

References:
1. THE BIG BANG - essay from Jane Alberts.*
2. THE HEART OF THE STORM - essay from Rose Mulready.*
3. PERMANENT ACCELERATION - essay from Kate Scott. *
4. KEEPERS OF THE FLAME - essay from Valerie Lawson.*