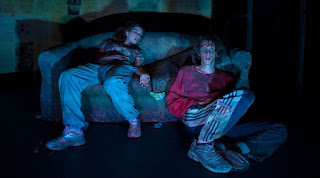 DEBRIS (2003) is a short one act play, by Dennis Kelly (his first), concerning two young semi-abandoned children living in the debris of society, both with fantastic imaginations, that sustains them, perhaps, to be able to survive. The actors Felix Jozeps (Michael) and Megan McGlinchey (Michelle) play the work elicited from them under the assured guidance of Director, Sean Hawkins, with fierce alacrity and clarity in their storytelling.

And, boy, they tell some stories. And it is here, in the writing by Mr Kelly, which is truly imaginative and brutally wonderful, that I found myself disassociating from the characters and the play - my ability to believe in them to be anything other than 'verbal puppets' of the writer uncoupled my willingness to go with the play. For instance, I wondered, just how did these young neglects of society educate themselves with the variety of philosophic observations about the history of man and glorious religious detail, along with the bizarre interludes, such as the finding of a child in the rubbish of the world and which they then call, poetically, "Debris", nurturing it from the bloody nipple of Michael, with such a sophistication of vocabulary and 'musical' arrangements? I kept hearing the authorial 'showing-off' voice talking straight to us, and never the authentic voices of this brother and sister in the sinister and filthily impoverished world that has been intimated by Mr Kelly in his 'given circumstances' and, subsequently, in the Design by this production team.

The simple design of a filthy couch and the garbage of empty drink cans and empty potato chip packets and other 'sweeties', is effective, with the distressed costumes and physical appearances of the actors, supporting, vividly, the pretence - Set and Costume Design, by Antoinette Barboultis. The Lighting by Alexander Berlage has a sophistication beyond the expectations of a late night show, sitting within the requirements of the main stage primary Design (I AM MY OWN WIFE), while the Sound Design by Tom Hogan, too, has a very well balanced set of offers for the material.

It is because of the incongruity of the content of the speeches belonging to these two characters that might, also, deny, a logical inner life for Michael and Michelle. Neither, Mr Jozeps or Ms McGlinchey created moments of genuine pathetic insight beside their character's narrative fervour, to cause any engendering, from us, of any understanding or empathy for the plight of these children. I wonder if they, as actors, genuinely could do so, considering the writing problem, for they are, on the other hand, mightily impressive with the textual explications. As short story anecdotes this text might be convincing, as flesh and blood dramatic life forces, they fail to keep me in the situation or caring for these characters. It is rather, the objective appreciation of the potential of the writer that you take away, from the performance (no small thing, by the way).

Like the writer Doug Wright of I AM MY OWN WIFE, Mr Kelly, too, has another show, a musical, co-incidently, on in Sydney: MATILDA, for which he wrote the adaptation of the Roald Dahl children's novel (the lyrics and music by Tim Minchin). Both shows by Mr Kelly, has children, front and centre of his interest, with some nasty, nasty adult figures as well, as back-ups. His writing 'potential' recognised, BIG TIME - West End London, and Broadway New York . International productions - by the Royal Shakespeare Company.
Posted by Editor at 3:47 PM