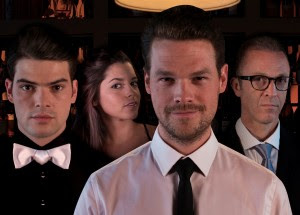 DUCK HUNTING by Aleksandr Vampilov was written in the Soviet Union in 1972. Vampilov was born in East Siberia and graduated from the Irkutsk University. He tragically drowned in his late thirties.  This is one of four of five full length plays by this author that have attracted attention. He, like Chekhov, is also a short story writer. DUCK HUNTING has been adapted for the Australian stage by a young(ish) Russian Director, Shai Alexander, and he has set it in Melbourne, for its Australian Premiere. Its central character, Craig Stephens (adapted name), is in a vertiginous flight to self destruction as his career, his personal life, all unravels in a hedonistic plunge into drugs and alcohol, resulting in truly 'bad' behaviour. If you thought Chekhov's Ivanov was a superfluous man, you must meet this character.

The original is some four hours long. This version now plays at a shortened length of some two and three quarter hours.

Shai Aleaxnder is a Russin-born and trained Director, Actor and Producer. It appears he was trained at the Vakhtangov Academic Theatre of Russia. In his program notes he tells us that his company, Contemporarian, co-founded with film maker Toby B. Styling, 'is influenced by Russia's Vakhtangov Theatre, Moscow Art Theatre, Konstantin Stanislavski, Vsevolod Meyerhold, Michael Chekhov and the highly expressive theatre of Peter Brook.'

Mr Aleksandr has recruited a team of actors and over 14 weeks of rehearsal attempted to shape a production around this text using his theoretical absorption of these cited centres of method of approach to the theatre. There are stylistic gestures to all these influences in the Set Design and Acting techniques, including video interludes and a taste for the use of familiar music in a post-modernist underlining. They are all of interest in themselves but because of the relative variation of skills and understanding of them by his team of artists, they appear to be rather a hindrance to the dramatic impact of the narrative and characterisations. Heath Christian in the long and difficult central role of Craig Stephens, holds the piece together with energy and some thoughtful technique. The other performers are committed but lack real skill to convince one of much more than choreographic gesture and relatively recited text.

It was rewarding to see this important Russian playwright's work and to see a dedicated group of aspiring artists attempting to meet the demands of Mr Alexander's vision. The technique of the famous artists that has inspired this Director require a laboratory of years to train and absorb. One can not fault this Company for its ambition no matter the result.