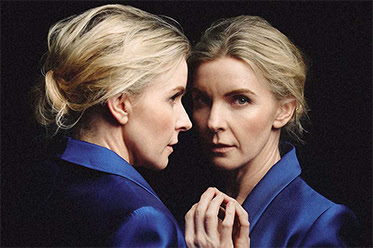 TO THE LIGHTHOUSE (1925), MRS DALLOWAY (1927), A ROOM OF ONE'S OWN (1929) and then ORLANDO (1928), four novels by Virginia Woolf that I have read (sometimes with difficulty), and prized. ORLANDO, the film (1992), by Sally Potter, starring Tilda Swinton, one of my memorable, magic times in the cinema - the skating scene indelibly etched into my memory banks. I am not a great fan of Sarah Ruhl's theatre adaptation (you've guessed it - its form - narrative storytelling [ugh!]. But then, I ask, how else to do the book any kind of justice, taking it from the page to the stage? - I don't know!) but was pleased to see it curated for the Sydney Theatre Company's 2015 season hoping it would be an inducement for its audience to want to read the book or watch the film, both remarkable.

ORLANDO, by Virginia Woolf, has the subtitle: A Biography. When it was published Virginia Woolf dedicated it to her friend and lover, Vita Sackville-West, whose personality she had set out to capture in the novel - it has been called "the longest and most charming love letter ever written". Vita came from an aristocratic family of 400 years of nobility, became a bride at 20, and had two sons, travelled to exotic locations such as Constantinople as the wife to an ambassador, and discovered her other sexual inclinations with Violet Kippel in 1918, when inspired by the costume's of the Women's Land Army, swapping her clothes of feminine gentility, for


the unaccustomed freedom of breeches and gaiters I went into wild spirits; I ran, I shouted, I jumped, I climbed, I vaulted over gates, I felt like a schoolboy let out on a holiday; and Violet followed me across woods and fields.' ... Shedding the clothes of [her husband's] gentle wife, Vita was reborn in a new identity. Violet chased behind her, and to the exhilaration of freedom was added a frisson of sexual conquest. ...'Violet had struck the secret of my duality,' Vita wrote; she rationalised it as an alternative preponderance 'of the feminine and masculine elements in herself' [1].

This Biography, ORLANDO, was inspired by a serious biographer of her acquaintance, of the famous Bloomsbury group, of Lytton Strachey and his book, EMINENT VICTORIANS (1918), where he had begun a new school, approach, to biographies


[with] its bareness, its emptiness [of boring facts, that] makes us aware that the author's relation to his subject is different. He is no longer the earnest and sympathetic companion, even toiling slavishly in the footsteps of his hero. Whether friend or enemy, admiring or critical, he is an equal. In any case he preserves his freedom and his right to independent judgement. ... He chooses; he synthesises; in short, he has ceased to be a chronicler; he has become an artist. [2]

Becoming that biographical-artist, too, but travelling uniquely even more daringly than Strachey in approach, Virginia Wolf was set loose with her pen in the creation of Orlando, an extraordinary character of fiction, one who like Vita with her family history, crosses centuries of time as well as gender. Unlike the real inspiration, Vita, shifting from 'woman' to 'man', Orlando shifts rather from 'man' to 'woman'. This book, in our times, has even more 'wonder' to contemplate as the idea of gender becomes a more fluent cultural concept.

Coincidentally, I am reading Yuval Noah Harai's, SAPIENS - A Brief History of HUMANKIND:

Biologically, humans are divided into males and females. A male Homo sapiens is one who has one X chromosome and one Y chromosome; a female is one with two Xs . But 'man' and 'woman' name social, not biological, categories. [...] To make things less confusing, scholars usually distinguish between 'sex', which is a biological category, and 'gender', a cultural category. Sex is divided between males and females, and the qualities of this division are objective and have remained constant throughout history. Gender is divided between men and women (and [much to the point of this novel/play] some cultures recognise other categories). So-called 'masculine' and 'feminine' qualities are inter-subjective and undergo constant changes. …

Sex is child's play; but gender is serious business. To get to be a member of the male sex is the simplest thing in the world. You just need to be born with an X and a Y chromosome. To get to be a female is equally simple. A pair of X chromosomes will do it. In contrast, becoming a man or a woman is a very complicated and demanding undertaking. Since most masculine and feminine qualities are cultural rather than biological, no society automatically crowns each male a man or every female a woman. ...  [3].

In the case of Woolf's Orlando, he does change his sex biologically, miraculously, from male to female, but in the case of the real Vita she could not, but is able, like many others in our social world, culturally, able to take on the gender traits, at will, of a woman and a man (and in 2015 to be wondrously, Lesbian, Gay, Bisexual, Intersexed or Transgendered). This wonder of Orlando, as a cultural hero, was always possible whether 400 years ago or in the early 20th Century or in this 21st one. So, what ORLANDO became for me in this production was the wonder of the fluidity of gender and its powers of attraction, no matter how culturally incongruous. In watching both the Lord Orlando and the Lady Orlando, the realising of the wonder and appreciation of whether male or female, young or old, or differently educated, that there is a terrible compromise for both sexes in their efforts to survive life and be happy. That this shared need to compromise oneself to the obstacles that each sex confronts, though in different ways, makes both sexes know what it is to be human, a member of the same  species known as Homo sapiens.


Nor are these titles laurels that can be rested on once they are acquired. Males must prove their masculinity constantly, throughout their lives, from cradle to grave, in an endless series of rites and performances. And a woman's work is never done - she must continually convince herself and others that she is feminine enough. [3]

This production begins by sitting us in an auditorium with the full blast of white light shone upon us, revealing us with all our flaws for all to see, maybe, temporarily blinding some, who need to close their eyes (minds) to what is about to be shown. For, what a disappointment, when the show begins, to find four actors, in ordinary dull day clothes, standing nonchalantly around a set of stairs that have the appearance of a poorly varnished plywood or chipboard. Then, when they began to speak in a storybook chorus style the distributed text, abstracted from the novel by Ms Ruhl, one felt that one was watching a slightly more sophisticated Theatre-in-Education (TIE) program - in that, it was at the Sydney Opera House in the Drama Theatre, and not in my local school hall. That when, at last, Jacqueline McKenzie came down the flight of stairs, as Orlando, dressed in a splashy red quasi-Elizabethan male costume with beautifully bobbed-hairstyle, there was some feeling of relief - it didn't last long. Ms McKenzie spoke her text in a broad Aussie sound: 'gunna' 'wanna' etc, and completely undermined my briefly restored confidence of a good night to come; she further disenchanted me with a physicality of movement that seemed to be one of lackadaisical habit rather than explored character choice, of period or class. If it was choice, I couldn't buy it. It just appeared to be an actor with no primed skills 'skating-by', by the-seat-of-her-pants, thought-less, craft-wise. Worse was to come when Mr Gaden, in 'drag'- once again - knowingly, wink, wink, entered as Elizabeth I, setting the tone of the night of a comedy with a more than slightly 'campy' humour. Instead of the grave and moving dignity of an age-ravaged Elizabeth, which Quentin Crisp offered in the Sally Potter film and the presentation of a "Virgin Queen" embarking on a desperate December/May relationship, we are given by Mr Gaden and Ms Goodes the laughable observation of a deluded woman ("drag") with a more than uncomfortable boy/girl (transgendered-"drag")

My disenchantment continued most of the night, although the wonder of the invention of Virginia Woolf kept me alert, despite the banalities of Ms Goode's tonal choices with Ms Ruhl's bare text along with her permissive direction of her actors (Staging, rather than Directing?), and the awkward sense that the furnishings from scene to scene, moving through centuries, on the revolving wheel of the stage machinery, were found in the cupboard of the STC's storage, rather than Designed for this production. The Lighting by Damien Cooper was kept serviceable, unable to hide the properties of furniture, but showing us artistry with the balance of shine, reflection, from what looked like an expensive floor treatment and a very expensive late full mirror set extravagance - it looked, as if all the money was there on the floor, and the huge mirror wall, and some four or five costumes for Ms McKenzie. The best and most arresting work was the Musical composition by Alan Johns and the Sound Design by Steve Francis. I remember that it was that, the musical interludes, its beauty and seductive choice, by both artists, that kept me in the production and so the play.

With the exceptions of Matthew Backer, again, making subtle good work (Desdemona, Marmaduke - check THE TEMPEST post); and the consumate and elegant presence of Ms Hastings Edge as Sasha, the Russian Princess (despite the costume of sparkly-tights) - her skating beautiful - the company seemed to have, exhibit, the skills of habit onstage, not choice. Ms McKenzie has the instinctive flair for this character and plays with charismatic enthusiasms but it is not enough compensation for neglect of basic skills in the execution of the work. (Check my Bell Shakespeare HAMLET post, for my recently raised ire!)

ORLANDO presented by the STC is an OK to Good show. It is not a Great show. Ms Woolf's extraordinary narrative audacities and her demonstrated LOVE for Vita Sackwell-West is the astonishing reason to go, however the spareness of Ms Ruhl's transliteration. Although, the film with Tilda Swinton is a must see and the book a necessity to anyone's cultural heritage.


* Both quoted in the Sydney Theatre Program.