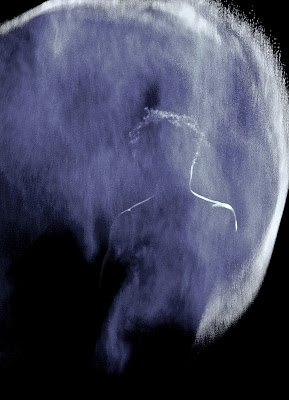 TANGI WAI - The Cry of Water, is the latest work by Victoria Hunt. COPPER PROMISES, a work presented in 2012, was a great landmark in my theatre going experiences. I saw its final iteration after a ten year gestation development. This new work in its first incarnation, too, has great power and impresses deeply. Ms Hunt is of part-Maori inheritance and she is investigating the deep mythological origins of the creation stories of her worlds, through expression of movement (dance), light and sound.

From the Artist Statement in the performance program:


Earth violations continue at breakneck speed towards an abysmal destruction. The air is white, blinding those who turn to see. In the void, the numinous agitation of women.
The cruelty of human time. This is our watch. Nightmares and mania unleashed by life and the living. We are surrounded by the unborn.

We are at a place of continual evocation. Transcendental whisperings of the dead
pervade our world. We use anything and everything we can to get our hands on.
Shudderings toward her uncontrollable potency. She who waits for us ... embodied spiritual energy of women.

From British historian Peter Watson's IDEAS - A History From Fire To Freud by (2005):


In c.4000 BC in a part of the world now referred to as 'Old Europe', "that includes Greece and the Aegean, the Balkans, southern Italy and Sicily and the lower Danube basin and Ukraine, (a Lithuanian scholar, Marija Gimbutas) has found a complex iconography grouped around four main entities. These are the Great Goddess, the Bird or Snake Goddess, The Vegetation Goddess, and the Male God. The snake, bird, egg and fish gods played their parts in creation myths, while the Great Goddess was the creative principle itself, the most important idea of all. As Gimbutas puts it, 'The Great Goddess emerges miraculously out of death, out of the sacrificial bull, and in her body the new life begins. She is not the earth, but a female human, capable of transforming herself into many living shapes, a doe, dog, toad, bee, butterfly, tree or pillar.' She goes on: '... the Great Goddess is associated with moon crescents, quadripartite designs, and bull's horns, symbols of culture'. .. .the 'birth giving Goddess', with parted legs and pubic triangle, became a sort of shorthand, with the capital M as 'the ideogram of the Great Goddess'.

At this point, then, say around 4000BC, there is a small constellation of ideas underlying primitive religion, all woven together. We have the Great Goddess and The Bull. The Great Goddess, emerging via the Venus figurines, symbolises the mystery of birth, the female principle, and the regeneration of nature each year, with the return of the sun. This marked a time when the biological rhythms of humans and the astrological rhythms of the world had been observed but not yet understood. [1]

Then, in TANGI WAI, the spiritual energy of women, is evoked, embodied by twelve female dancers led by Ms Hunt, utilising the Bodyweather technique (Tess de Quincey acting as mentor to the project) in a creation myth around WATER. It is the narrative content of the work (Charles Koroneho; Aroha Yates-Smith).

In a mostly darkened space the women, the Great Goddess (perhaps), in a mist of water lit with the beauty of the complicated patterns of astonishing light by 'magicians' Fausto Brusamolino (Light and Mist Design) and Boris Bagattini (Video and Light Design), personify, interpret, explain the rituals and 'effort' of it all. The work is driven aurally by an all enveloping Sound Design by James Brown. Costumes are by Annemarie Dalziel, Victoria Hunt. Object Design by Clare Britton

The impression of the show is dominated by the extraordinary Sound Design and Light Show, with the appearing, 'murky' presence of ethereal shapes/forces conjured by the movers/dancers, accompanying. The Sound Design of James Brown, has his imagination engaging like a sorcerer, sound and technical inventions from a multitudinous resource, thrusting the work forward propulsively and harnessing it, extraordinarily, within the atmospherics of mythical time, and still, yet, vibrating the constant evolutionary forces of the present. The aural impact was immersive and massive. I felt, was affected, to be a witness to a beginning of it 'all' in Time Present and Time Past, at once. The sense of TIME connect, association, with the fictional explanations of our homo sapiens ancestors as to the origins of nature, and the importance of the mist, water, still, now, nurturing the earth, underlined my seeping (once unconscious) panic as to its value and fragility in the eco-balance of our present days.

TANGI WAI: The Cry of Water, a marvellous conception by Victoria Hunt, that with further development will become even more exciting and overwhelming in the experiencing of it and its cerebral remembrances and warnings. A work of transformative power and beauty.