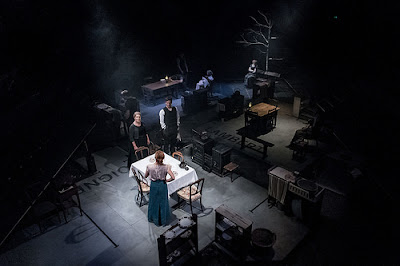 National Theatre, in a co-production with Royal Exchange Theatre Manchester presents, HUSBANDS AND SONS, by D.H. Lawrence, adapted by Ben Power, in the Dorfman Theatre, at the National Theatre, London. U.K.

D.H. Lawrence was born in 1885 in Eastwood, near Nottingham, the fourth child of five children of coalminer Arthur and his wife Lydia. He died at the age of 44, in 1930. He is most celebrated for his novel writing which include famously: SONS AND LOVERS (1913), THE RAINBOW (1915), WOMEN IN LOVE (1920), KANGAROO (1923), LADY CHATTERERLEY'S LOVER (1928). But besides ten collections of poetry and seven collections of short stories, he wrote a number of plays: eight. None of them were ever produced in his life time.

HUSBANDS AND SONS is a National Theatre project, Directed by Marianne Elliott (the co-director of the highly honoured WAR HORSE and THE CURIOUS INCIDENT OF THE DOG IN THE NIGHT)) and adapted by Ben Power. Three one act plays by Lawrence: A COLLIER'S FRIDAY NIGHT (1909), THE WIDOWING OF MRS HOLROYD (1910-13) and THE DAUGHTER-IN-LAW (1913) have been interwoven into a complete play so that they become one large 'symphony' instead of three small works. Says Mr Power in the program notes:


The idea we landed on evolved through discussion ... of how we could cut into each of them and be quite brave about reshaping: scenes from each of the constituent plays could be clicked together like jigsaw pieces to make a new whole.

So presented in-the-round in the newly renovated Dorfman Theatre (formerly known as The Cottesloe) the three families and their neighbours play simultaneously, living out their lives in the kitchen setting of each house. Again, tells Mr Power:


THE WIDOWING OF MRS HOLROYD is a very tight play with a single line of action in three scenes - its very condensed, very economic; A COLLIER'S FRIDAY NIGHT, centred on  the Lambert family, is a big stew of atmosphere and experience but there's no plot at all: as the title suggests, it's a snapshot of this family on this day. But when you take the sum of the minor chords of that play and put it next to the train of action of THE WIDOWING OF MRS HOLROYD, you begin to get something really rich and multi-faceted. And THE DAUGHTER-IN-LAW, centred on Minnie and Luther Gascoigne, has both things going at once. When you put all of that together, you get a lot of action and a lot of atmosphere.

Lawrence grew up in this world of a mining community ("That's the country of my heart.") and there is an authenticity to all that happens in these plays, the minutae of emotional pre-occupation (fear of accident, not being the least of these), the ritual of living through the melodrama of family relationships, those trivial and monumental events in the lives of miners and their families, the comic, the ironies and the tragedy. The plays have the wives at the centre of the action and they focus on their relationships with their husbands and sons: the masculinity and virility of the miners who behave instinctually and tribally, who seem to improvise their ways through the mine and its daily burden, the pubs and its camaraderie's, and the kitchens with their expected refuge-respite, becomes contrast to the women who appear intelligent, aspirational and fastidious with 'agendas' for the future of their families, especially of their sons, always impelling their actions with relative clarity and sense of positive direction. Of hope for a better life for their children.

In previous productions of these plays in the 1960's when they were discovered and presented by Peter Gill, it was, beside the dramatics of the writing for character and story, the hyper natural realities of the production that caused a sensation, but here Ms Elliott has determined to do away with the details of 'real' properties and simply employ accurate gestural actions for eating, washing ,sweeping, etc (Movement by Scott Graham), so as to help the audience to 'read' and focus on what is happening for each of the characters, to 'read' the wonderful complications of the intense but not necessarily expressed feelings - the subtextual narrative of FEELINGS of the inhabitants in these three miners' houses. It works beguilingly.

The production is some three hours long with one interval, and we are moved to two positions as an audience in our seating to help us immerse equally between the families. The perspective of viewing is  learnt and then re-learnt as each half unravels, and an intimacy of adaptive creative collusion develops subtly amongst us. On stage there is a large cast of some nineteen players and yet we come to identify who is who and how each is related with ease and commitment, opening our empathies to each of them with shifting degrees of loyalty as the narrative unfolds. We follow with our hearts the ups-and-downs of them all - shifting ground as we learn more of each of them as life sweeps them on. It was a very absorbing session in the theatre and not one of theatrical dramatics, but one that became a recognition of ordinariness, actualities and truths - the characters became 'our family' and we duly cared. And what has become most interesting, for me, is that of all the work I saw in this past month in the theatre in London and New York, it is this play, production, and these characters that continue to amplify and resonate more deeply as time brings reflection, and come to be of primary importance and pleasure in my memory recall. The power of ensemble storytelling told by a master of the lived experience of the world it purports to reveal: the world of D.H. Lawrence's own mother, father, siblings and neighbours grows more vividly, such that one wants to read those novels of his again.

The Direction of Ms Elliott in the simple but complex Design of Bunny Christie, alongside the atmospheric and detailed Lighting by Lucy Carter, with Music by Adrian Sutton and an absorbing surround Sound Design by Ian Dickinson creates a subtle mesmerising and internal shaping of emotional response from the audience without melodramatic offers. The piercing whistle of the mine shocks one into attention and apprehension for the developments of the families stories.

One is asked to 'read' the work not 'watch' or 'audit', and as it is in reading a good novel, it is the collecting of the honed details, personally, perpetrated by each of the performers, at the behest of the writer, and conducted by the Director, that creates a rich tapestry of a life identity of a time past. This is partly what Lawrence was seeking for and delivering: a sense of particular identity (what it is to be a human) and a yearning to be part of that community (again), no matter its shortcomings.

The acting is uniformly good, the ensemble playing for the heightening of a sense of that 'remarkable' community with, albeit, the complex co-dependent needs and patterns of individuals too, as their characters make their way and survive in physically dangerous and underprivileged spaces with severely repressed emotional permissions in a non-demonstrative 'culture' of hard work, excessive alcohol, religious superstitions and social conventions. This acting may have been 'great', it being executed with a consistent modesty that was breathtaking for its purity of goal.

This production was subtle in the experiencing but powerfully indelible in the recall. Much to be prized.

N.B.  I am aware that I have not named a single actor but to do so would require me to acknowledge all nineteen, for they were all equals of note. This production moves to the Royal Exchange Manchester as part of the National Theatre outreach to its nation to tell its nation's story. The vocals of the actors are steeped in the idiomatic dialect of the East Midlands, true and magical and 'musical', moving between 'fine' and 'broad' speech (Dialect Coach, Penny Dyer).
Posted by Editor at 6:25 PM