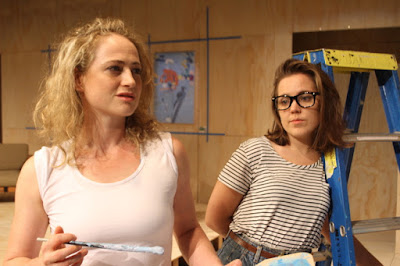 UNFINISHED WORKS is a new play by Thomas De Angelis. In 2014 he presented his play, THE WORST KEPT SECRETS, also at the Reginald Theatre, under the auspices of his own production company, bontom.


an incisive portrayal of contemporary Sydney and its culture, explor(ing) the sacrifices we make in the pursuit of our life's work. Famous artist Frank Ralco (Lucy Goleby) is a woman who has never separated her life from her art. Wildly successful, she has a reputation that precedes her. When Frank finds herself creatively blocked and unable to paint, she begins to worry that her entire body of work has been meaningless, and her life pointless. To top it all off - some of her work has just been stolen. When Frank meets university student and aspiring artist Isabel (Contessa Treffone), they hatch a plan to test the power of their art, and in the process change the course of their lives.

The play presents (intimates) a clash between Commerce and Art and the consequent ethical struggles.  It presents a crisis of Artistic confidence. It presents a generational clash of life expectations between parents and children. It presents a same sex relationship between two women. It presents the veniality and superficiality of some of the art managers/agents.

The real problem, however with the play, even if those subjects are of vital importance to you as  an incisive portrait of Sydney - is that the development of any of these presentations is glacial in its narrative, agonisingly repetitious in its dramaturgical plotting (I know what you are saying, get on with it, please), and represented by one dimensional characters (that the actors stretch to inhabit as at least two dimensional characterisations, thank god!) And so, if none of those pre-occupations of Mr De Angelis are much in your concern to spend an inordinate time with, they being so insular and bourgeois in their attention, you will probably not give a 'brass razoo', to do so. I couldn't have given 'a you know what' by the end of it, I had become so wearied.

Respect for the artists at toil in front of one kept one well behaved.

The people of the play are so, so familiar. One sees them on Australian television consistently. They are boring there and they are even more boring in the Reginald Theatre. And the problem here is that one can't switch channels or turn it off, we are 'trapped' in the theatre, and 'horror of horrors', the production authors have decided we will have no interval and so keep us 'prisoners' for the whole of the two hour event. We have no civilized choice, but to sit and persist, and squirm and 'boil'.

Now what is important, what is a defining moment, or turning point for any of us is a relative thing. The horror of a war image can be as defining for one individual, as the kiss between two women may be to another. So, what Mr De Angelis has decided is important for him and believes is a necessary thing for us to think about, and that that thought will change our life, is his life's experience and own expectation and is, so, okay. It just may not be as important to us as it is to him.  However, his job is to make us think so, so that we can feel empathy and perhaps have catharsis with/for his people, which he fails to do.

Chekhov, similarly, wrote plays that seem to be about nothing and are full of repetition and discussion. The difference is that Chekov was a keen, forensic observer of his fellow humans, and came to understand them and their sense of 'mortality' in the big universal scheme of things, and he, in his writing, not only gave us clues to WHO these people were, WHERE they were, WHEN it was, especially in terms of the 'emotional' stakes of the moments in the story, but was especially clear about WHAT they wanted, and particularly accurate in telling us WHY they wanted it  - their deep psychological motivations - and of the many various ways (the HOW) that his people tried to get it. The difference in the writing skills between Chekhov and Mr De Angelis is that this young writer writes his people with very little insight into their motivations and has only a superficial sense of their complex 'given circumstances' and simply shows his characters saying and doing what he has observed and padded out. He has not created three dimensional beings, they are simply a thumbnail sketch of superficially observed types. Insight into their Past so that in their PRESENT we can see their desired FUTURE is not provided. There is virtually no sub-text in UNFINISHED WORKS, just surface behaviour.

It was epitomized for me when late in the play a character (Isabel) brings out an actual copy of the day's Sydney Daily Telegraph that had on its front page a graphic image of the recent Brussels terrorist atrocity with a heading statement: CAPITAL CARNAGE, and made no reference at all to the bigger world crisis (one wonders why that image is brought on stage - it probably hadn't been even thought through, or was an accident of fate), and proceeds to work through the defining moment of his character's plot - a review of a painting. But that single image and journalistic heading of two words: CAPITAL CARNAGE, held more contemporary incision than the two hours of waffle that Mr De Angelis thought would be of interest to an audience - that would cause my world to change.  My world gaze was definitely not concerned with the artistic block of Frank the painter, the sexual burgeoning of Isabel with a woman, or the pangs and difficulties of modern day parenting and social ethics in a moneyed competitive world - let alone the drug habit of Jimmy, the agent, which is treated as an opportunity for some blasé joking. Mr De Angelis hadn't found the way in his writing to make any of that a concern. The idea of Brussels and terrorism, introduced on to the stage by the Director Clemence Williams, was of much greater import, and it seemed to me, of more urgency, than any of Mr De Angelis' people and their predicaments in his play.

The actors, Lucy Goleby, Deborah Galanos, Rhett Walton and especially Contessa Treffone give valiant 'flesh and blood' to their characterisations, cursorily written by Mr De Angelis, and create 'miracles' of acting technique to sustain that work throughout the moribund movement of the narrative plotting of the author. (How many times have we seen Australian actors keeping afloat a new Australian play?- I did enough of it as an actor in my day, too many times. I have knowledge. Ms Galanos has done, of late, much to 'support' new Australian writers. She must have been indeed grateful for THE HOUSE OF RAMON IGLESIA, by Jose Riveria, early last year, where character and story offered the opportunity to truly reveal her gifts.) Kyle Kazmarzik, as the artist's agent, Jimmy Gunning, gives a performance that does not much escape from his program admitted admiration of Robin Williams and Jim Carrey, both it seems in their comic-stand-up times (routines), not their filmed character acting, for there is not much of the latter from Mr Kazmarzik, here - the immediate laugh is the object of his creation, too often.

I saw THE WORST KEPT SECRETS, the last work produced by Mr De Angelis, and thought he had some promise as a writer, especially in the devising of dialogue. (In fact, the opening speech of this play is extremely arresting and I became excited to be engaged further - alas, that was the best of the writing.) His ear for dialogue is still his principal strength. That Mr De Angelis has just spent a year studying playwriting at NIDA under the aegis of Stephen Sewell is hardly marked here. Nothing much as developed or changed in his approach, either to subject matter, dramaturgical construction or character observation, despite that year of study. How could that be?

The Direction by Ms Williams is practical and pragmatic, well done, considering her material. And the Set Design by Charlie Davis is, too, practical and pragmatic, if not arid in the extreme - it looked like untreated ply wood neatly engineered to fit the space, scattered with the barest furniture needs. There is no Lighting Designer credited and the Sound Design by Hedon (Hugh O'Brien) is mostly a selection of suitable 'pop' music.

The objectives for writing UNFINISHED WORKS stated by Mr De Angelis in the program notes are altruistic indeed:


I just want to write stories that get an audience thinking. I don't care for parables or agit -prop, but I know that language can be used to move people and change things. I just want my plays to give you the chance to think in a way you've never thought before. I'd just like to have an hour and a half of your time to have a small effect on you.

I certainly had enough time to think while watching this play but I'm sure the things I thought and wanted changed, after doing so, are not the things Mr De Angelis wished for. I had not thought like that before, so vehemently, and I had to give, and politely gave, perforce, not an hour and a half of my time but two hours of it to Mr De Angelis. The effect of his writing was profound indeed.

This is a production presented at risk, as all art is, by a young self funded company. See it if you want to support enterprise in a very fledgling endeavour. There is, to my mind, no other reason to attend.

I recommend these plays to Mr De Angelis and to you:

STANLEY, by Pam Gems (1996), a play about the trials and tribulations of the artist and the intendant 'collateral damage' to his family and friends.

RED, by John Logan (2009), a play about the creative process and crisis of the artist.