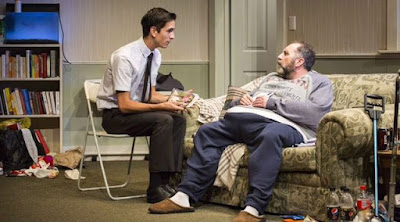 THE WHALE, written by American writer, Samuel D. Hunter in 2012, has all of the ingredients of a classically constructed play - it ticks all (most) of the boxes of 'good', audience-friendly playwriting, tried and still true. A realist environment we all know; characters (we might nearly know) with complicated back stories; enough contemporary issues that we can, relatively, associate with: morbid obesity, religious tyranny and its corroding influence, sexual taboos, gay (bi-sexual) family, adolescent angst; and a prospect of an imminent death which provides a hook to develop a dramatic tension with a growing emotional sentimentality (which could result in tears before curtain call); plus, references to a bigger world other than the living room of this everyday home, allowing us to draw a connection to the metaphysical aspirations of our imaginative species, in this case through the invention of the Old Testament story of Noah and the Whale, and Herman Melville's revered MOBY DICK, to help us feel a spiritual dimension - to be able to feel happiness through great sadness.

This kind of writing can win you prizes in the US of A. This play did: the Drama Desk Award in 2013 and the Lucille Lortel Award for Outstanding play.

In a cramped and filthy room we meet 'indulgent' Charlie (Keith Agius), a supposed 600 pound man - 'a monster' he is called - marooned, beached, in his domestic space, making a living as an on-line teacher of literature,  while eating his way to death, who is visited by his carer, Liz (Meredith Penman), who may be his food enabler, as well;  a young Mormon, Elder Thomson (Alex Beaumont), who becomes a 'detective' for Charlie's greatest mystery concerning his gay partner, Alan, who starved his way to death after a visit to the local Mormon church; Ellie, his here-to-fore estranged high school daughter full of 'rage' over her neglect; and Mary (Hannah Waterman), his ex-wife guiltily seeking 'forgiveness' for her hostile, but understandable, reaction to her, their, marriage break-up. All of this unfolds while we observe the growing physical demise of our hero, ultimately dying, but only after all the problems of the human relationships of the play appear to have been resolved well - a fiction, indeed, of life. But then that is what popular storytelling does, as Oscar Wilde told us: "The Good end happily and the Bad unhappily. That is what fiction means."

The acting from all the company is very good, especially Keith Agius, inside a remarkable 'fat suit' (although, hardly on the scale of a 600 pound man), who creates a beautifully detailed human being with the nuances of a considerable range of response to convince any audience to hand over their empathy. This may be the best work that I have seen from Mr Agius - very impressive. Ms Waterman, in a brief scene, captures the wife, Mary, and her diverse complexities with a piercing eloquence. Ms Bayliss hits the hormonal petulance and bad behaviour of teenage Ellie, with clear ownership but does not seek much outside that in terms of fleshing out ,what could be in the writing, a tendency to caricature. Mr Beauman, as bewildered, lost Elder Thomson, has the charm of youth and an innocence that captures our favour and disarms our concerns about the writing. While Ms Penman, as Liz,  has the most difficult role in the play, having to find the balance between a sympathetic carer of Charlie, who sometimes, as well, reveals a cruelty, both verbal and physical - Liz's responses need more complexity of conflict to be fully understood. Ms Penman does a very creditable job, to assist.

The Design, by Charlie Davis, is grimly realistic, and confronted with many short scenes, the Director, Shane Anthony, has with Composer, Basil Hogios and Sound Designer, Katelyn Shaw, created an environment for the audience to stay engaged with the movement of the 'melodrama' of the play in an emotionally attached way, if not in a too 'Hollywood' manipulative manner - the last orchestrated moments of 'miracle', for instance.

I sat with my audience members at the Old Fitz, and was able to quell my objective struggle with this highly accomplished American writing and enjoy the admirable commitment of all the other artists involved. The play, for me, has all of the qualities of the too 'neat' American play that gives the audience a sentimental journey of great 'syrupy' comfort -"Despite all, all's well with the world", "Life is like a box of chocolates..." etc. Can you believe that this is one of my objections to John Patrick Shanley's DOUBT, as well? Watching, becoming involved with THE WHALE, I couldn't help creepily feeling the obvious but pleasant 'smugness' that I always feel radiate from plays like DOUBT and DRIVING MISS DAISY. I was unabashedly content with my experience but, on the other hand, felt suspiciously manipulated and a little spiritually 'grubby' as I left the Old Fitz. Weird, eh? Weirder because around me there was sufficient evidence for me to see that a lot of my fellow audience were deeply moved, with no such thoughts.

Give me Albee, Miller, Williams, Annie Baker, even Beth Henley. What about Therese Rebeck? Tougher,  pragmatic observers of the human experience. THE WHALE: Satisfying. Satisfactory, but hardly cutting edge. Horses for Courses, as they say.
Posted by Editor at 9:24 PM