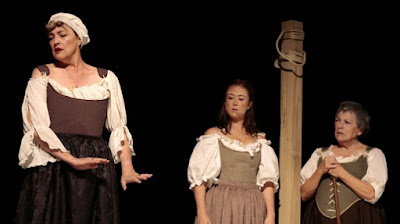 PLAYHOUSE CREATURES is a play written by April De Angelis in 1993. It has not, to my memory, been presented in Sydney (or elsewhere), except at NIDA as a training exercise, directed by Tony Knight. It is a wonder that it hasn't and a kind of further indictment of the culture we have lived through, (even with a woman leading our major theatre companies, the Queensland Theatre Company (QTC) and the Sydney Theatre Company (STC) through the nineties and into the naughties). With another stirring of our consciousness to the struggle for women to be heard on our stages and screens, personified, of late, in Sydney, by the formation of WITS (Women in Theatre and Screeen), this play's appearance at the Queanbeyan Performing Arts Centre, as the first production of a new theatre company: pigeonhole theatre, the creation of Liz Bradley, Jordan Best and Karen Vickery, is a shot of robust curating that deserves attention. It is of interest that Ms De Angelis began her career as an actor with A Monstrous Regiment of Women Theatre Company, a ground breaking company of the 1970's. It's history would be worth studying.

The play concerns the experience resulting from the permission of women to appear on stage for the first time ever, in 1669, during the Restoration reign of King Charles II with the Thomas Bettterton Theatre Company. It "focuses on five of the most famous, including Nell Gwynn and Mary Bettereton, to provide a moving and often comic account of the precarious lives of Restoration actresses; curiosities, sex objects, or professional artists?" Ms De Angelis makes no apologies for her female gaze on this history, even her feminist inclinations as an artist, and "so the play is contemporary in tone and preoccupations but adheres closely to the lives and struggles of the English actresses, if not always constrained by historical accuracy." (From the program notes) Ms De Angelis explores the female experience and explores the contrast between the ideals of feminism and the practice of it with this play, something we saw in her play, JUMPY, last year, at the STC.

The actors of this production have a disparate range of skills but under the Direction of Jordan Best, create a moving ensemble of integrated storytellers, that focused intently on the lives (and politics) of the women in the play, such that one was induced to a state of a belief and immersion of a deep empathetic concern. All five commit with passion and a sensibility to the bigger mission of the writer. Emma Wood (Mrs Marshall), Jenny Roberts (Mrs Farley), Amy Dunham (Nell Gwynn), play with a certain sense of the trajectory of the artists' stories, while Karen Vickery seizes the wealth of the writing, and the opportunity of much Shakespearean verse, to make a veritable 'feast' of Mrs Betterton's talents and sad arc, underlining the cruelty of Time. Ms Vickery gives great barnstorming readings to her Cleopatra and the Dark Lady (Lady Macbeth) and provides much intelligent wit and insight to the human dilemma as an ageing female actor, as provided by Ms De Angelis over the journey of the play. Ms Vickery is beautifully counterbalanced with a quick witted comic timing from Liz Bradley as Doll Common, the wily backstage management to the women of the Company. All these roles are gifts of creation from Ms De Angelis and these actors make a confident grasp of what they have been given to tell with the authentic, but not ironic, sense of a self-knowledge of the gender discrimination in our society.

The production values are variable but simply pragmatic within an obvious restricted budget: Set by Christiane Nowak; Costume by Anne Kay; Lighting by Kelly McGannon; including a largely filmic Composition of a score with a live cello accompaniment, sometimes a little over-heated, by Matthew Webster.

PLAYHOUSE CREATURES is a moving evening in the theatre not just for its emotional and historical content but, particularly, because of its pertinent but gentle observation that the role of women in the theatre may not have much changed since 1669, and celebrates that these pioneers, whatever their ultimate experience was, could say with pride: "But we spoke, and we was the first..."

This world has been introduced to us from another point of view in Stephen Jeffery's THE LIBERTINE (the actor's experience being that of Elizabeth Barry), and in the film STAGE BEAUTY, with Billy Crudup and Claire Danes, Directed by Richard Eyre, in 2004.

PLAYHOUSE CREATURES, an important debut by this company and with a play that deserves exposure in Sydney. If not a great play a very astute, timely and good play. One hopes Canberra takes note. Pam Gems is another playwright generally ignored in Sydney's repertoire as well: STANLEY, more than worth seeing. Maybe that could be the next for pigeonhole theatre?  Believe it or not, it would be a premiere for that play in Sydney (Australia?!), as well! - another, of what I call,'  'femalist' rather than feminist, ignored by our 'gatekeepers' of what Sydney audiences should, can see. A kind of tragic 'scandal' really.

P.S. AADA, another training school has also produced the play. Andrew Davidson, Directed it.
Posted by Editor at 3:57 PM