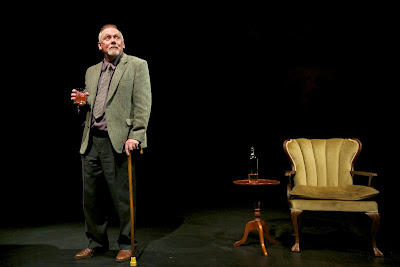 AS WE FORGIVE, by Tom Holloway, presents three monologues: Vengeance, Hatred, Forgiveness. "Three Morality Plays For an Amoral Age" performed by the one actor, Robert Jarman. It is elegantly Directed by Julian Meyrick, employing a co-design of his own, alongside Jill Munro, featuring a series of visual images that appear on a reddish screen throughout the production - this was the one element that held my attention appreciatively, throughout. A music score by Raffaele Marcellino, played live, by cellist, Jack Ward, set a mood of possible contemplative melancholia whilst, pragmatically, acting as a cover for some fairly luxurious costume and scene change times.

Mr Jarman in a 'grand-fatherly' manner engages the audience with direct reference and tells, first, of his act of vengeance pursued against a neighbourhood boy. The story's content  and stately tempo, has an atmosphere that reminded me of the mechanics of Edward Alan Poe's, THE PIT AND THE PENDULUM. Unfortunately, VENGEANCE, had none of the grip of that story and seemed, feasibly, more and more unlikely a true recounting of a possibility. HATRED, the second story, is one of paternal abuse between a father and son, and had more ownership from Mr Jarman, and permitted an acceptance of a reality and permission to believe the proposed morality of its telling. While the last story of FORGIVENESS, in which we are told of a continuous bleeding, and the necessity for pain to be part of forgiveness, was thankfully short.

The monologue is not my favourite form of theatre and the actor needs to have a charisma and energy level of some great aesthetic arrest to engage me - say, Maggie Smith, in TALKING HEADS; or with recent stage reference, Tom Campbell's performance in MISTERMAN; Kate Cole in GROUNDED, are examples of what I mean. And, given the task of creating three separate characters, the monologist must have the imaginative skills and available visceral craft skills to truly astonish one into consistent belief with detail in his choices to help us distinguish his three men - one from the other, and stay with him. This was not the experience in the Stables Theatre and one became disinterested as the performance unwound.

Tom Holloway's writing is not of the usual poetic capacity and the 'mouth-pieces' in this work, then, appear, of much less interest, for us. These morality plays for our amoral age fail to engage or clarify in their intended encouragement for thoughtfulness.


…It is the mark of intelligent drama that it ignites the intelligence of its audience. ... Who are the men in AS YOU FORGIVE? ... The answer is: anyone. ... They are not special people singled out for special treatment, but instances of common humanity who bear up under grief and pressures all human beings must soon or later manage. This is the true movement of AS WE FORGIVE, its central insight: that the great questions of life, by turns perplexing, disturbing and transcendent, are not the province of philosophers or playwrights, but are available to anyone. All we need is the courage to face them.

None of the nameless men of AS WE FORGIVE, serve the objective of Mr Holloway and Meyrick well enough in this performance. I was unprovoked, unmoved - really, a little bored. Rather, I recommend you spend some time with Hanya Yanagihara's characters in A LITTLE LIFE, which, too, tells of brutal life incidents, but also of acts of friendliness, of tenderness, of four ordinary men and their 'satellites' - and so, because of the contrasts, produces a work that, as Julian Barnes writes:


... feels elemental, irreducible -  and dark and disturbing though it is, there is beauty in it.

The lack of any observation of authentic beauty in Mr Holloway's world as acquitted by Mr Jarman and Meyrick produces a sense of pessimism and nihilism of a high order - not what I need, today, to continue to live on with my little life.
Posted by Editor at 8:15 PM