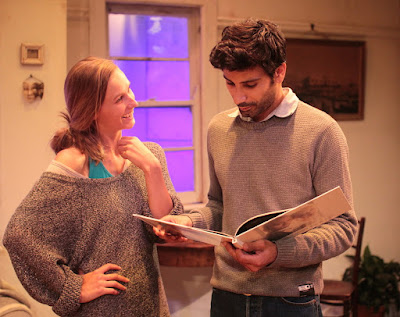 BELLEVILLE (2011) is the second play by Amy Herzog that we have seen in Sydney. 4000 Miles, we saw in a production by Anthony Skuse, in May, 2013 (it has just finished a re-rehearsed regional tour).

Amy Herzog writes plays observing the details of situation concerning fairly everyday contemporary people. The writing style is part of what I have called "slow theatre" where the action of the play has long episodes of silence, into which the audience can endow the emotional action of the characters - this "slow theatre" movement is epitomised in the work of another American, Annie Baker, whose play THE ALIENS, we also saw at the Old Fitz last year (incidentally, the recent Director of Ms Baker's works including the recently, highly lauded, THE FLICK, is Sam Gold, Ms Herzog's husband. They have not worked professionally together. It is interesting to see Ms Herzog and Baker writing in this recent "slow theatre" experiment - who is influencing who?)

BELLEVILLE, is a grim observation of the deterioration and collapse of a marriage between two young American Dreamers of a generation brought up by parents who encourage their off-spring: "It doesn't matter what you do when you grow up as long as you're happy." Young husband, Zack (Josh Anderson), in helping to fulfil his young wife's, Abby's (Taylor Ferguson), dream of happiness, which is to live in the City of Love, Paris,  transports their life to the multi-cultural suburb of Belleville. Unhappily, the living of this dream of happiness, has been built on a lie, necessitating increasing acts of dishonesty to sustain.

Ms Herzog, constructs the work with a slow 'drip-feed' of information revealing the unravelling of the lie on which their 'happiness' is built, the tensions that ensue, producing a gripping anxiety of a premonition of danger. The struggle for control of the situation, by Zack, is wonderfully built with the intense inner life of the performance from Mr Anderson, as his character's mask of deception crumbles away. As the consequent causations of anxiety to his already mentally fragile wife, who comes to suspect that all about her is not what she thinks, we watch the deceits web her, lead her, to question her sanity and her grip on reality. (It reminded me of one of my favourite films of this genre: GASLIGHT (1945), with Ingrid Bergman and Charles Boyer.) Ms Ferguson, replacing at very short notice another actor, has instinctively created a powerful sensitive construct of a woman on the verge of a complete psychotic and physical breakdown - it is truly, a remarkable, visceral performance, and that is not even considering Ms Ferguson's brief rehearsal opportunities. Ms Ferguson is an actor to watch.

The world of these two unravelling first world citizens, are culturally contrasted with the hard working refugee lives of their rooms' 'landlords', Alioune and his wife, Amina, played with with a sober, grounded weary patience, by Aldo Mignone and Chantelle Jamieson. It is a sombre and subtle critique of the values of the first world as we watch the meticulous cleaning up of the debris of the apartment in the last scene of the play.

Director, Claudia Barrie with her Design team has built an elaborate naturalistic environment, by Jonahan Hindmarsh, that seemed more Australian grunge than Paris grunge, in architectural and set dressing detail. Benjamin Brockman, (SHIVERED, DARK VANILLA JUNGLE), creates a Lighting design with a surreal, changing, pastel background support, that too often is under lit for the seeing of the vital, pregnant 'silences' of the action on the mainstage. The Sound Design, by Katelyn Shaw, assists the ratcheting tensions of the writing tremendously.

A 90 minute, one act play, BELLEVILLE, is a psychological thriller disguising a contemporary critique of the 'American Dream', and its influence and consequence for some of the youth of its citizenry. An experiment in writing, a good play with four good performances, with that of Ms Ferguson,  alone, worth the time and money to go see.
Posted by Editor at 11:56 PM