Bright Those Claws That Mar The Flesh 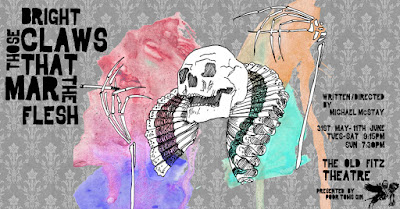 Michael McStay and Red Line productions present, BRIGHT THOSE CLAWS THAT MAR THE FLESH, by Michael McStay, at the Old Fitz Theatre, Wooloomooloo. A late night production (9.30pm). 31 May - 11 June.

This is the third or fourth play that I have seen by this young writer. All of the works reveal a complicated and well-read young artist with a need, a burning passion, to express his very sophisticated vision of the world that has influenced and shaped him. The works are intellectually dense and full of 'quotations' from a superior mind. The problem is that most of the plays seem to present characters that are merely 'riffs' of the author's latest obsession, and although there is some attempt - small - to attach them to a dramaturgical form, the characters are mostly mouthpieces of witty and clever life-propaganda, but not harnessed to any clear spine of journey for an audience to grapple and identify with. The work, becomes then, I find, on my own part, superficially received, and though, generally, entertaining is enormously frustrating. I cannot find the satisfaction of developed characters or story to keep me determined and agile enough to investigate deeply, or, to want to. This play, too, became tiring and bewildering. "Stop the world I want to get off."

In the first moments of BRIGHT THOSE CLAWS THAT MAR THE FLESH, are an aural clue, -quote - from Mozart's DON GIOVANNI, when he is about to be dragged down to hell by the Commendatore  - So, I wondered later, is this counsel meeting, being prepared by Mr Brotowski, a metaphor for a way-station - limbo, purgatory - of judgement to a heaven or hell, to which, the motif from Mozart's Requiem will launch us, one by one, at its end? Further, are the names of the characters a given reference from Mr McStay, for me to be able to read a code to enlightenment?

Mr McStay, as Director, has inspired some electric commitment from his company of actors.The actors, during the performance, give the appearance of knowing, mostly, who, when and where they are and what is happening, and in this kind of contemporary Monty Python 'fuck you' wit found a playing manner of some style and collective empathetic ensemble. The fierce intellectual timing of phrase is mostly accompanied by a physical delineation of economic discipline. Ms Jensen is clean and clear in her deportment of Edmundia Dante, and appears to be as fresh with energy, at the end of this marathon task as she did on her first appearance - amazing. Nick Masters, too, in a robust creation of a very rotund Orson Rubb, is arresting. Two impersonation of actors, of an era long past (egotistical matinees stars) are amusingly brought to life by Ms McGlinchey and, especially, Mr Devenport. Mr Trotman, in a relatively thankless role, does well to attempt to stay in the logical 'swim' of contribution, whilst the other actors struggle with their tasks, that demand more technique than they seem to have at hand at the moment - enthusiasm is not enough of a substitute for prepared detail and precision.

The production is working on a shoe-string budget within the confines of another production's Design boundaries, (HOWIE THE ROOKIE), especially Lighting, but has Sound Design, by Thomas Moore, that gives some relief, of at least, recognition, in the thicket - 'forest' - obfuscation, of the text.

It is exciting and encouraging to see a new Australian work and writer exploring thematics and concerns of what appears to be of some high intellectual curiosity. However, as yet, the basic dramaturgical skills on how to engage an audience, and to keep that audience attentive and 'thrilled' is still an elusive element of the production experience of Mr McStays' works.

Having an independent Director, to question and challenge the writer, insisting on clarity of purpose, might help. Reading some of the intellectual role models of this daring area of playtelling, from the past and the present, might also illuminate a path to clarity. I recommend, at least, Tom Stoppard: ARCADIA, THE INVENTION OF LOVE, and especially, the trilogy, THE COAST OF UTOPIA (plays concerning the Russian Thinkers, pre revolution), let alone, suggesting that that overproduced ROSENCRATZ AND GUILDERNSTERN ARE DEAD, could be a good start.

Congratulations to Red Line for curating such an interesting writer.

P.S. "Bright those claws that mar the flesh", is a quotation from the Sylvia Plath poem, PURSUIT. Is that,  Mr McStay, pertinent, for us to know?  Mmmmm. Smoke and Mirrors!
Posted by Editor at 2:46 PM